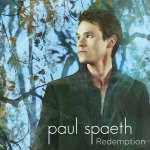 For some people, it is a long and winding road to get to the realization that music is going to be their career path in life. For others, however, the seeds of their musical inclinations sprout early and begin to blossom while they are still quite young. Pianist and composer Paul Spaeth was one of those early bloomers. Here he shares a wonderful story about the genesis of his musical journey: “When I was three years old, my father took me to a Toys “R” Us and told me I could pick out any toy in the store. I instinctively chose a yellow dinosaur-shaped toy piano, which planted the seed for my parents to place me in piano lessons at the age of five. I was so eager to get started after the first lesson that I listened to the lesson tapes repeatedly, late into the night. The next morning, my father woke up to the sound of music playing in the other room and found me sitting down, already playing the music I had listened to the night before.” He goes on to say: “As I continued lessons, my improvisational instincts grew. When I was nine, my grandfather discovered me improvising new compositions on the piano and decided to record them, musing he’d probably hear me on the radio someday. That experience single-handedly sparked my desire to become a recording artist.”

It turns out that his grandfather was right. While in high school, Paul created new age piano and orchestral pieces that would later become his first self-produced album, Cobalt Blue. He posted the tracks on the independent music website MP3.com and ultimately received 1.6 million downloads and accolades such as the Top Artist in Los Angeles. When Paul was only 15, he won the Pepsi-Summerfest Talent Search as a solo pianist competing against rock, rap, and jazz groups. Since then, Paul attended and graduated from the Thornton School of Music at the University of Southern California, and has been very successful in creating scores and orchestrations for TV, film, and video games. With all the recognition, and awards he has garnered, including a Recording Academy Grammy Scholarship Award, Paul has certainly achieved a remarkable amount for someone barely 30 years old.

With that in mind, I was amazed to learn that his latest release, Redemption, has been 10 years in the making – 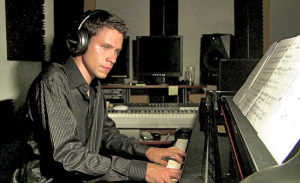 one third of his life! As Paul explains: “ For a decade, I’ve been compiling this album of very personal piano music. Redemption is the culmination of very special moments throughout the years. Each track came from heartache and hardships, joy and self-discovery, but underneath each surface emotion is the glimmer of truth’s light. Our true nature is unconditional love, and by recognizing this, deep healing can occur, I hope by sincerely offering my truth through music, I can awaken yours.”

So let’s embark on personal journey with Paul and see where it leads. The first step is a track entitled “A Lifetime Spent.” An introspective solo piano melody draws us in, slowly building in intensity, and becoming quite dramatic. There is a cinematic air to Paul’s playing, although certainly not surprising given his background and education in composition and film scoring. What Paul said earlier about the life experience and emotion that inspired this music becomes quickly evident in his playing which exudes tremendous passion and feeling, both in his more powerful passages as well as in quieter moments. An interesting contrast came towards the end when after a dramatic flourish, the piece appears to end, but after a moment of silence, is followed by the most delicate coda, providing a musical yin yang experience. The next song is an emotionally evocative tune called “To Say Goodbye.” Unlike the diversity displayed in the previous track, this one stays more on the bittersweet side of the spectrum, and is sure to resonate in the hearts of anyone who has experienced loss and separation in life.

I always appreciate those special times when a piece of music provides a perfect soundtrack for something that is happening in a given moment. Listening to his composition entitled “Reflections,” and looking out my window at the late afternoon sun sparkling on the waters of the bay, it almost felt like this music was made to go with this scene. The music here is more simple and spacious than anything heard thus far and reveals another facet of Paul’s compositional abilities. Tracks four and five create a two part story, 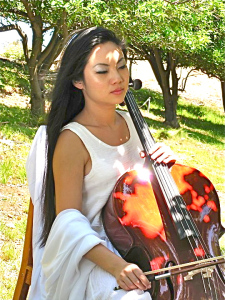 respectively titled, “ Prelude to a Lullaby,” and “Lullaby for the Mending Heart.” These are the first of the duets heard on the album, and feature the exquisite cello artistry of Tina Guo. Tina is now performing in the Cirque du Soleil show “Michael Jackson: The Immortal.” She left on the 3-year world tour the day after they finished shooting his music video together of “Lullaby for the Mending Heart.” Another beautiful duet is heard on track 8 with a rendition of the classic “Amazing Grace.” This song features the superbly talented accompaniment of Christopher Luther on violin. Paul has created an interesting version of this well-loved tune. The piece starts out sparsely in a slow tempo the first time through the melody before picking up the pace a bit and adding more embellishment the second time. However, after that, it is back to a slower and more soulful interpretation, becoming very spacious and dreamlike – an unusual and intriguing arrangement. The final duet with cellist Tina Guo is on track 10, entitled “This Is Our Faith.” Here, as on his work in general, Paul exhibits his mastery of composition as the piece flows through various movements and emotions.

In listening to the last song on the album, the title track, I had a sense of how close to his heart this music is to 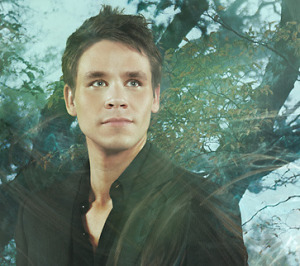 Paul – of how he is not just playing notes from a piece of sheet music, but is playing the song of his life story. Here he shares his perspective on this: “My story of redemption, of reclaiming myself in a relational and spiritual sense, is shared with honesty and open-ended possibility. In sharing redeeming stories, we become stronger. In sharing our dreams, we share the promise of hope.” Redemption by Paul Spaeth is a deeply personal musical experience that draws inspiration from the well of Life. Capable of spanning vast emotional terrain, Paul’s music ranges from introspective and impressionistic, to powerful and dramatic expressions of profound feelings that resonate in the innermost being of the listener. Each composition is a perfectly told story that speaks to the experiences we all share. Emotionally evocative and spiritually uplifting, Redemption is an inspired work of art from the heart of a gifted composer.