While many recording artists in the new age genre craft their musical masterpieces in solitude, others prefer the team approach to writing and recording. Andy Mitran and Al Jewer are among the latter, having been musical partners for about 15 years. In that time the dynamic duo created 4 CD’s and 4 DVD’s, which have generated numerous awards and nominations. In 2004 they were approached by producers of the Oprah Winfrey Show to contribute music to their production library, which lead to them composing hundreds of pieces that helped create Oprah’s “Harpo Sounds” music library. From there Andy and Al began composing music for film and TV as well as launching their own Perfect Choice Music Library which now contains over 12,000 mixes.

Having met and spent time with them both at the ZMR Awards in New Orleans earlier this year, where their Desert Light album won Best Relaxation/Meditation Album, I can say that in addition to being successful producers and recording artists, they are both incredibly nice people, and quite down to earth despite the celestial nature of the music they create. The story of how they met and began working together is interesting and dates back to the year 2000. At that time, Andy, who is now a 5 time Emmy winner, was a cast member, one-man band, and the host on a segment of a long-running children’s TV show. Al, a classically trained musician and producer with over 40 commercial releases to his credit was there to play Native American flute for a music segment on the show. As a professed electronic music gear geek, Andy couldn’t help but notice the awesome hi-tech audio rig that Al had brought and masked behind a piece of fabric. Andy invited Al back to his studio to write a tune where an enduring and productive partnership was born. 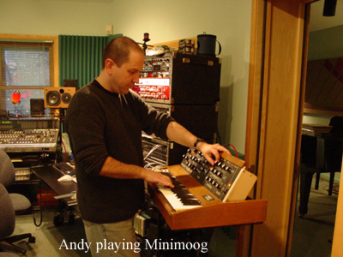 obsession (they call it neurosis) over the smallest details in the recording process. At that first session, the pair spent four hours trying to find the perfect single bell sound to begin and end the piece with. The fact that they were both fine with this extreme attention to detail made them realize that they could definitely work together. According to Andy: “Al and I are both really neurotic about our music and our process. Our superpowers as a team are mixing, mastering and building great rigs. Firstly though, we are music nerds. There is also an incredible trust we have developed in each other over the 15 or so years we have worked together. We have this arrangement that if one of us is really unhappy about a thing we will dump it because we have come to trust that there are five other alternatives that will work equally well for both of us. This simple agreement allows us to transcend the normal roadblocks that some collaborators encounter.

In our interview, Al shared this about their latest project together: “Surrounding Sky completes a journey into deep ambient that Andy and I began with Music of the Earth and continued with Desert Light. It’s been a great exploration of this genre that we’re so fond of. We have again stretched out with new sounds and new, interesting timbres. I particularly like the variety on this CD, I think we cover a lot of musical ground.” To this Andy adds: “I’m also very pleased with the sonic textures we have developed for these pieces. One of our secret weapons is the triple chamber drone ocarina that Al is playing on some of these pieces.” More on this “secret weapon” later.

Right from the beginning of the first track entitled “Oracle,” the listener is drawn into a serene shimmering soundscape that perfectly reflects the photo of the ethereal Aurora Borealis on the album cover. While Al is well known for his beautiful playing on flute and electronic woodwind instrument, on the next song, “Butterfly,” he also plays EBow guitar. For those who may not be familiar, the EBow is a handheld electronic device that creates infinite sustain when held over electric guitar strings. The effect can be quite haunting, as it is in this song along with Andy’s atmospheric synthesizers, subtle hand percussion, and chimes. After only two songs with eyes closed, I had to check to make sure my feet were still on the ground and I hadn’t drifted off into the ozone. 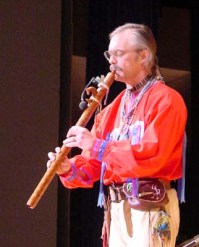 However, an interesting shift towards a somewhat earthier ambience occurs on “Dawn,” the third track. Here Al accompanies Andy’s delicate harp playing with silver flutes and Native American flute. I enjoyed the change up and appreciated the diversity in their music and the many instruments they are both accomplished on. I must say though, that while this piece has a different feel than the preceding ones, it fit perfectly and maintained the album’s gentle flow. The innovation continues on the next track, “Morning Light” as special guest Arthur Durkee adds Japanese shakuhachi flute to the dreamy mix of Tibetan singing bowls, synthesizers, piano, and bass.

The harmonious combining of unlikely elements abounds within the tracks of Surrounding Sky. A good example is on “The World Beyond,” with the juxtaposition of Native American flute and the tampura, a stringed East Indian drone instrument that generally accompanies a sitar, adding a hypnotic and mystical dimension to the music. Another unusual bit of audio alchemy is found on “Traveling,” where along with Andy on marimba, synth, and hand percussion, as well as Al’s electronic woodwind, Arthur Durkee plays a Chapman Stick – an electronic instrument in the guitar family, with either 10 or 12 strings that are tapped with both hands. This piece has a bit more of a rhythmic component than other tracks. 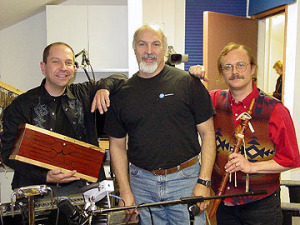 From there, the remaining 6 tracks provide a continuous flow of expansive soundscapes that recall the classic sound of Hearts of Space and Echoes radio programs. Titles like “Levels Of Peace,” “Regeneration,” and “Suspended” give a good idea of the vibe of the music. They say there is a first time for everything, and for me, hearing ambient ocarina was one of them. In a style very different from the instrument’s traditional usage, Al played long extended notes with lush reverb and effects that perfectly complimented the spaciousness of the track. I couldn’t agree more with Andy when he says: “Surrounding Sky employs some breathtaking spatial relationships.”

The final track, “Smoke,” integrates the triple chamber drone ocarina mentioned earlier, on a track they call their “most relaxing cut ever.” Along with Andy’s ambient piano, the piece makes use of space more than any track on the album. It reminded me of the vastness of the universe and the unimaginable distance between celestial objects. Al’s background as a Reiki master and teacher as well as a sound healer using flutes is evident in the energy and sensitivity he brings to his wind instruments, as well as the electronic atmospheres he creates. I also appreciated the openness of Andy’s piano playing, allowing for room to breathe between notes.

Among the many things that impressed me was the fact that although there is diversity on the album, overall it maintains a cohesiveness that makes it feel like a complete body of work. According to Andy: “This album is very pure and is one of our most focused in terms of genre. It falls squarely in the ambient, meditation/relaxation, and electronic genres.” To which Al adds: “I also love the healing nature of ambient music.” I was greatly impressed by the expansive array of instruments that were used and the unique ways in which they were blended by this pair of gifted recording artists. I found that listening with headphones gave me a greater appreciation of the subtle nuances as well as the dimensionality of their soundscapes. Surrounding Sky is a masterpiece of ambient space music that I can’t recommend highly enough to fans of the genre.