I can’t imagine what a difference it must be living in the Pacific Northwest after growing up in Malaysia – but Lynn Yew Evers can. However, it must have been an adjustment as well when she left her native land to earn her degree from Trinity Music College of London in Singapore and Hong Kong. Although she began playing at the age of four and first performed when six years old,  in her relatively brief career, this brilliant young pianist has had a number of distinguished experiences. At the top of her list was being invited to perform for the king and queen of Malaysia, as well as another performance for the Prime Minister and other dignitaries. She has also had a number of high level appearances in both Malaysia and the US as a solo artist and accompanist for choirs and ensembles. In addition to her skills as a performer, Lynn is a talented composer and arranger who has used her gifts of perfect pitch and an intuitive sense of music in a variety of contexts, including a 35 piece chamber orchestra, an 8 piece “unplugged” ensemble, as well as for her debut album “Falling Leaves,” and now this, her latest CD release.

I have no doubt that wherever Lynn was playing or recording, it would sound amazing, but she took it to the next level by choosing to have Dawn Of Peace produced by Grammy-winning Windham Hill founder Will Ackerman at his prolific Imaginary Roads Studio in Vermont, which manages to be both bucolic and state of the art at the same time. In terms of recording grand piano, there are few facilities that can compare with their magnificent rebuilt customized Steinway that is tracked using nine top of the line studio microphones to capture every nuance. 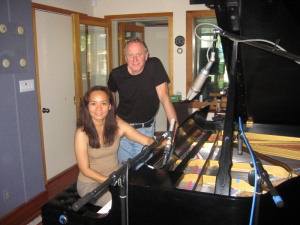 If there is anyone who has a golden ear for acoustic music it is Will Ackerman. Having worked with some of the greatest names in this genre, when he compliments your music, it is high praise indeed. In an exclusive interview, he had this to say about Lynn: “When you have someone like Lynn Evers you’ve got this brilliant pianist from a technical standpoint and also this person who is filled with heart. Her music is incredibly expressive. So that’s the ultimate joy – to get someone who is so versatile as a pianist that you can offer suggestions and she is able to manifest that change gracefully in her own work. Believe me, when I hear heart in music, when I hear the pathos, when I hear the joy, when I hear the sadness, that’s what transports me. And Lynn Evers brings that in spades.”

Her “Dawn Of Peace” CD contains 11 exquisite tracks of solo grand piano beginning with “Yew and I.” From the first delicate notes and phrases, it is obvious that being revealed is a musician of great sensitivity. This opening track provides a wonderful introduction and creates a sense of expectancy for what is to come. The dictionary defines the word “lyrical” as “expressing the composer’s emotions in an imaginative and beautiful way,” and the next song entitled “Lyrical Mood” certainly fits the description. On track 3, “A Dying Art,” a wistful feeling pervades, perhaps evoking a memory of something cherished that is passing from existence. But of all the pieces on the album, it is the title track which prompted the most effusive remark from Will when he said: “Dawn of Peace struck me as the most uniquely your own. I mean all of your work has your voice, you never disappear for a moment, but that piece was the most utterly distinctive. To me that is a signature piece for Lynn Evers. I find that probably the most moving of all of them.” I would be hard pressed to dispute that claim.

I had an interesting experience while listening to a track called “Unspoken Tale.” Upon first hearing it there was something hauntingly familiar about it, but I couldn’t quite put my finger on it. After a while I realized that it bore a slight, and unlikely similarity, in part, to Michael Jackson’s “I’ll Be There.” Not that the two songs are anything alike, but perhaps it was the melody or cadence that sparked the comparison. One of the most evocative tunes, for me, both in title and music was a track called “Shade of a Torn Daffodil.” After reading the title, I was couldn’t help wondering about the inspiration for that, and what the music would sound like. With its rolling arpeggiated chords and evocative phrasing, the composition follows an

interesting progression, which I found quite beautiful. On “Rain Of Spring,” the tender refrain was as rejuvenating to the spirit as raindrops are to vernal flowers.  Capturing both a sense of timelessness and the preciousness of being in the now, “A Fleeting Moment” brings the album to a serene and graceful conclusion.

And speaking of conclusions, I will rely on one last quote from Will Ackerman to provide an astute observation and panoramic perspective: “Lynn Evers has the heart of a romantic and the hands of an artist. The combination is very powerful. Her music is like a walk through the most beautiful garden you’ve ever imagined; her compositions imbued with profound emotion and grace. Dawn of Peace is the larger world’s introduction to a brilliant new talent.” 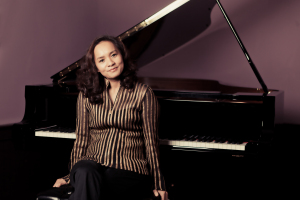