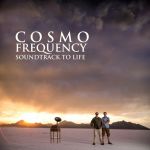 On their hit song, Brian Wilson and the Beach Boys sang about “picking up good vibrations.” Now, many years later, a new group called Cosmo Frequency is doing that as well, although on quite a different wavelength. According to one of the group’s founders, Paul Martinson, “We tune into the vibrations and positive influences which allows us to capture the music that surrounds us. It is a journey that includes light, love, joy, passion and positive energy. There is an infinite amount of energy resonating around us all the time so there are an infinite number of frequencies to tune into.  On this album we present a small selection of the musical frequencies that we have discovered, that we enjoy and that resonate within us.” This focus on universal energy and the metaphysical dimensions of life are indicative of the musical direction and thematic orientation of Cosmo Frequency.

Paul Martinson and Brent Vincent are the principle members of the group, which also includes lovely ethereal vocals by Lisa Wegener on some of the tracks. According to their bio: “Paul and Brent both started creating original music at a young age, and both became adept at utilizing electronic keyboards, synthesizers, sequencers and computers to create their own music.  Martinson was a member of a new age music recording group while Vincent pursued a career in DJ-live-mixing at dance clubs.” Although they were friends early on, and shared their love of music with each other, they eventually lost track of each other for over 20 years. However, through the magic of the internet they later regained contact and continued their musical explorations, culminating in the formation of Cosmo Frequency.

Their debut album, Soundtrack to Life, like life itself, is diverse and includes a variety of interesting elements and musical styles. The songs range from relaxed ambient excursions, to upbeat electronic grooves, and some mid-tempo pieces in between. Instrumentation includes synthesizers, Native flute, drums, bass, trumpet, flugelhorn, electric guitars, piano, percussion, background singing, and much more. A less commonly seen addition is the Electronic Woodwind Instrument, or EWI, which is kind of like an electronic horn or flute synthesizer that is able to create different sounds. I remember this instrument being used by the Windham Hill instrumental group, Shadowfax. The music of Cosmo Frequency has a strong rhythmic foundation to many of the songs. According to Vincent: “Sometimes we are asked why we pay so much attention to our rhythms. It is because the energy of the universe is rhythmic, pulsating, vibrating.  Rhythms can come from atomic movement, space storms, solar flare-ups, light-waves, radio waves, ocean waves, a heartbeat.  There are rhythms everywhere in everything, and our music reflects that.” Spoken in true Cosmo Frequency fashion. 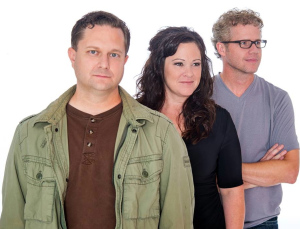 The album opens with a soundscape called “Within the Veil.” With this as a backdrop, a short spiritual poem by Matt Bowen is read, which ends with the phrase phrase “a universe’s song about to begin a new refrain.” The style of this presentation flashed me back a few years to something similar by the Moody Blues from their On The Threshold Of A Dream album. The track continues with a meditational chant by Lisa Wegener. From there, the pace picks up with “The Gift,” which begins with a percolating synthesizer sequence in the style of Vangelis, Tangerine Dream, or Jean Michel Jarre. The EWI plays a trumpet-like part as orchestral elements and the sound of a solar wind are added to the mix creating a grand cinematic air. One of the things I appreciated most about this song and a number of their compositions is the way they incorporated the analog-style of sequencing heard in many classic electronic music albums and put their own spin on it with the layers and effects they added to it. Not surprisingly, the track called “Apollo Skies” was inspired by the Apollo space missions. Paul recalls: “As a child I would go outside and watch the space shuttle orbiting.” I particularly liked the random electronic sounds and chugging sequence that propels the piece. Of course, just about anything with the sound of a tubular bell brings to mind Mike Oldfield, but this track was not too far from his style of music in general.

As mentioned, Brent Vincent has a background as a club DJ, and the influence of that is clearly heard on “Classic Story (Light Years Away)”. After a brief symphonic intro, synth bass and four on the floor drums propel this upbeat tune into the stratosphere as a bubbly sequencer adds to the momentum on this danceable track with classical influences. The energy downshifts a bit on the appropriately titled “Chillaxin,” with its mid-tempo groove and ethereal female vocals. However, it is on the next track, “Canyon Chant,” that we get to hear another side of Cosmo Frequency that is even more laid back. Although the sounds of Native flute and tribal drumming bring an earthy ambience, there are still enough electronic elements for this song to fit comfortably into the style of the album. For a composition called “World of Light,” I’ll coin the term “electro dream pop” to describe its’ style, which includes Lisa singing Paul’s lyrics about “consciousness.”

As much as I greatly enjoyed the variety of grooves and spacey electronic effects on the preceding songs, I was quite 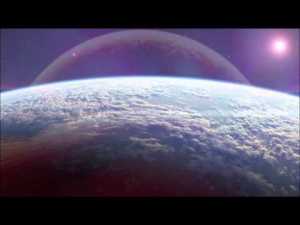 taken by the softness and serenity of a track called “Winter Solstice.” Its’ meditative and melodic atmosphere is quite lovely to settle into and reflect on the stillness of the season. However, the cold of winter soon gives way to the heat of a two-part composition called Mt. Emotion – Part 1 and 2. Brent’s aforementioned DJ experience shines again, driven by what he calls a “progressive trance beat.” On Part 1, I particularly liked the chord progression and the dynamics of the piece, which varied nicely and added interest. Part 2 brings the beat, which is skillfully layered with synths and sequencers. The album draws to grand conclusion with a Winter Olympics-inspired track called “Horizon.” Book-ended by a piano intro and outro, the song soars with high energy and a driving rhythm.

Although the album has been released fairly recently, it is already enjoying critical acclaim and radio airplay. In fact, it has received a Best New Age music debut album 2013 for the New Age Stars Radio Awards, as well as reaching number 8 on the Zone Music Reporter Radio Chart in October 2013, and was named in the Top 25 CD’s for November, 2013 by the prestigious and long-running Echoes radio show, which is syndicated to over 130 stations nationwide. I am pleased to see Cosmo Frequency getting the attention they deserve for their excellent debut CD, and I believe that they have just begun to tap in to their collective creative potential. I’m sure that we will be hearing even more great sounds from them in the future. I’ll certainly be tuning into their frequency.