To borrow a quote from a classic Crosby, Stills, & Nash song: “It’s been a long time coming…” What that refers to in this context is the fact that the seed for the music that appears on Lis Addison’s new release Crown In The Sky, was planted far in the past, and like a mighty oak or redwood, has taken a long time to grow into its magnificence. The use of the tree metaphor, in this case, is intentional. With her previous albums having titles like Grace Of The Green Leaf and Song Of The Tree, it is obvious that nature is an important element in the life and music of Lis Addison.

She began her musical quest early in life, writing her first piece of music at the age of 11. A year later she travelled to India and an interest in world music was awakened within her, which is still evident in her music to this day. Lis eventually went on to study music formally and attained a Masters degree in electronic music and recording from Mills College – a rarity in the early days of the genre. At the same time, she also began to develop spiritually and wanted to incorporate that into her music. As an emerging eco-feminist, one day in a flash of inspiration a fully formed idea for a screenplay with a complete storyline, music, and characters came to her. Called Daughters of Urth, it told the tale of a Matriarchy that lives in harmony with nature. The project sat on the back burner for many years, until recently, when Lis realized that “the right moment is now.” In her words: “After many rewrites and edits, I decided to release the songs (as the Crown In The Sky CD) without the story because the messages are so pertinent to our lives today. The full story may be told in its entirety one day, but until then, I sing for you in honor of the Divine Feminine, our Mother the Urth and all her children.” A percentage of CD sales go to global tree planting projects and organizations that empower women and girls. 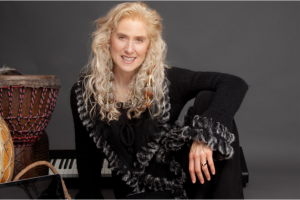 There is a strong sense of purpose and intention behind this music, which is about creating harmony with Mother Earth and each other. According to Lis, the songs remind us that, “every step we take is danced on sacred ground.” The dance begins, appropriately with a song called “Voice Of The Tree,” which sets the tone for the album with its elements of ambient, new age, jazz, and world music. Having heard all of the previous recordings by Lis Addison, I was a bit surprised, and delightfully so, by the jazziness of this piece. Her voice on this track has an airy, whispery quality that reminded me a bit of particular songs by Sade, or perhaps Norah Jones. But comparisons aside, Lis has a lovely, alluring vocal tone that perfectly fits the vibe of the music and draws you into the song’s misty magic, which is enhanced by the artful use of echo on the voice track.

In addition to her beautiful vocals, on every track, Lis’ extensive experience in music and recording is evident in the fact that she wrote all the songs and lyrics, did all the arrangements, produced the album, and played just about all the instruments. Additional instrumentation included her husband Dean Foster on bass and beats. As well as being a talented musician in his own right, he is also a master motion graphics artist and created the visuals for a new music video from the album which can be seen at this link: http://www.youtube.com/watch?v=lnSGjSNgD0k

Also included on select tracks is keyboardist Kit Walker and Christopher Krotky who added additional beats and collaborated with Lis on mixing and mastering. Another exotic addition from the other side of the world graces a track called “Bring Her Light.” These are the voices of the Kamba women and children from Kenya, Lis talks about her recent trip there: “I lived with these generous people and we sang, danced and planted trees together. I was able to use recordings from my visit there on this song.” The lyrics speak of how much we take from Mother Earth in our greed, and ask the question: “Can we quell our lust? Or will she turn us into ashes, and our ashes into dust?” This powerful message is set to a down-tempo groove with world music influences, that brought to mind a more laid back new age version of Peter Gabriel.

The title track opens with a lush orchestral intro that evolves into diverse movements throughout the piece. According to Lis: The phrase “Crown In The Sky” describes our human experience in which we are open and receptive to the spiritual realm yet anchored on the earth in the physical realm. Like the magnificent tree, we are at once radiant and rooted, reaching towards a future of promise and hope.” This process of growth is echoed in the lyrics:

“Out of the acorn growing high

And your Crown In The Sky

And your Crown In The Sky”

An intriguing artistic alchemy is created on a tune called “Carry Me,” that blends Middle Eastern influences with a funky groove morphing into more of a pop jazz feel on the choruses. On a track called “How Deep,” the sound of Indonesian Gamelan sets the tone as a contemporary urban chill rhythm and fretless bass create the pulse. The album draws to a fitting conclusion with a final tribute to the Earth, entitled “Mother Gaia.” What makes it even more fitting for LIs, as a mother herself, is that her 17-year old daughter, Katie Foster (also a musician) adds her vocals to this track as it builds to a crescendo in the second half. I especially appreciated the intricate layered vocals found throughout the album, that create rich textures, crosscurrents, and counterpoints. It’s obvious that a lot of energy went into working on them in the studio. Lis is also an excellent keyboardist and has a wonderful feel for synthesizers and electronic sounds that provide animation and atmosphere to the music.

As impressed as I was with the two previous albums by Lis Addison, Crown In The Sky is a fantastic release that reveals a new level of creative achievement. The music truly expresses the energies of earth and sky with its rootsy rhythms and ethereal ambiences, as well as its messages of appreciation (and concern) for our home planet. The unique blend of elements that Lis has brought together on this album should appeal to a wide cross section of listeners. This music marks a return to her roots as a songwriter, with contemporary influences of jazz, chill, and world music. I was moved both physically and spiritually by its propulsive energy, evocative melodies, and inspired lyrics. Crown In The Sky is an uplifting and thoroughly delightful listening experience.