While the Nashville area, and Tennessee in general, is best known as the Garden of Eden for country music, many other genres of music grow and flourish there as well. A case in point is pianist and Tennessee resident Joseph Akins, whose instrumental music has been compared to George Winston, David Lanz, and Jim Brickman. However, it’s been a long and winding road that has led to his current sound. In his pre-teen days, Joseph actually played the saxophone in the school band, in addition to taking piano lessons. A pivotal moment came for him in those early years while playing in his dad’s country-rock band. In his words: “I remember standing on a stage when I was about twelve years old and deciding that music would always be a part of my life.” As Joseph grew into his teens, he became enamored with rock and roll, which evolved into touring with a band and releasing a solo rock album in 1986. This phase was short lived however and he began to study jazz and electronic music, eventually earning Bachelor’s, Master’s, and Doctoral degrees. His affinity for education extended into teaching and he is currently a professor at the prestigious Department of Recording Industry at Middle Tennessee State University, the largest music-recording program in the world. Joseph has also produced DVD tutorials and writes textbooks on synthesizer programming and music production. In his career as a recording artist, Joseph has released a number of albums including Keys to the Heart, Masterpeace, Spirit Touch, and A Piano Christmas, which have been well received, achieving extensive radio airplay and chart success.

The title of his latest recording, A Southern Sun, provides some insight into the inspiration for the music. As 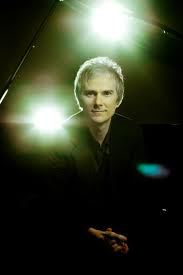 Joseph describes: “I wanted this album to reflect my southern roots more than my previous albums. I kept this in mind while creating it.” The first song is the title track, which Joseph says came from the cover art. Looking at that image while listening, it’s easy to envision a new day dawning over a field of tall grass gently swaying in the breeze. There is an uplifting quality to the melody and evolves through various movements. Joseph has a wonderful sense of dynamics and timing, knowing exactly when to pause for dramatic effect. I was also aware of how, in certain sections, his left hand provided a solid anchor, while the right hand danced lightly over the melody. The next track, “Along Stones River,” also reflects his surroundings and draws inspiration from The Greenway along Stones River in Murfreesboro, TN – a peaceful trail that Joseph visits often. Gentle rolling arpeggios provide a sense of movement and flow like a quietly meandering river. While on the first track, Joseph was inspired by the sun it is the rain that motivated his creativity on a more reflective composition entitled “Waltz in the Rain.” In his words, “this piece sounds a little sad to me but I wasn’t sad when I composed it. The melody came to me one late rainy night while playing around on the piano.”

By contrast, “Dancing On the Sea” is bouncy and upbeat perhaps even revealing a trace of Joseph’s background in jazz. More than a trace of this influence is heard on a track called “Muscadine Wine,” particularly in some of the choice of chords that lean towards the jazzy side of the spectrum. I found this piece especially appealing. I also greatly enjoyed the more luminous energy of “Sunshine,” which follows. The appropriately titled “So Beautiful,” is an elegant composition with a cinematic air that extends through its various movements with more of an introspective feel. Another song that lives up to its title is “An Eagle’s Flight,” which after a brief introduction, leaps off and takes flight. There is a dramatic flair to this piece, which made it one of my favorites on the album. And speaking of the title, Joseph relates an interesting anecdote about that: “Shortly after choosing the title for the soaring melodies heard throughout, my sister gave me an eagles necklace that once belonged to our dad, reminding me how fond he was of eagles. This confirmed that I had chosen the right title.” Another of my favorites on the album is an upbeat number called “Down On Town Square,” inspired by the enjoyment Joseph has in visiting the town square of Murfreesboro, TN. where he lives. The rolling style of the piano playing with its ornate embellishments reminded me a bit of another southern son, Bruce Hornsby. The album draws to the perfect conclusion with a reminiscence of Joseph’s childhood in Georgia called “Watertank Hill,” that has perhaps the most overtly country music influence on the recording. 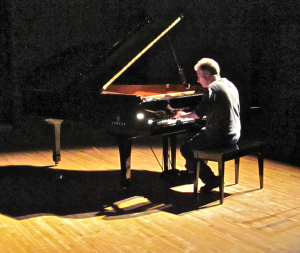 One of the things that impressed me the most about the music of Joseph Akins is the range of styles and moods he covers. Yet there is a distinct musical identity that is present in whatever piece he is playing. I admire an artist who can explore diverse musical terrain, yet maintain a continuity that allows the various elements to sound like they all belong to a body of work. I also found it interesting that as an educator who is immersed in the world of electronic music, synthesizers, and MIDI production he would return to his roots to make an album recorded exclusively on a solo grand piano. But it seems that the theme of returning to his roots, by celebrating his southern heritage extended to the instrument that has been a part of Joseph’s life since his earliest days. Joseph Akins is a supremely gifted pianist and composer with a flair for writing memorable melodies and performing them with great style and emotion. Fans of innovative piano music will certainly enjoy basking in the warm glow of A Southern Sun.