With her fifth release, There Was a Time, pianist/composer Kathryn Kaye follows up a string of critically acclaimed and chart topping albums, including her most recent, Patterns of Sun and Shade. Here, she once again reprises her long-standing working relation with GRAMMY winning producer and Windham Hill Records founder Will Ackerman and his call list of world-class studio musicians. With neo-classical, contemporary instrumental, and new age influences, Kathryn’s gentle melodies also draw from the deep well of the Appalachian folk music she grew up with. Her deep love of nature is also reflected in songs like “Spring Snow,” “Wind In The Aspen Grove,” Shadow Of A Bird In Flight,” and more. Kathryn’s sensitive and elegant music exhibits a perfect balance of sound and space that is as relaxing as it is emotionally evocative, on what is perhaps her most expressive recording to date.

I mentioned above about Kathryn’s early inspiration, and in our interview she elaborated on that: “Much like my previous albums, this one was inspired by songs I heard, sang, or played while growing up in the mountains of southeastern Kentucky.   More so now, though, music from the past combines to reflect what is happening in our troubled world today; the many tragic events, uncertainty, unrest, longing and hope for peace. And always, there’s the backdrop formed by the enduring grace and force of Nature that comforts us, calms us, and occasionally takes our breath away. For me, past and present merge more than ever in the songs you’ll hear on this CD.”

She goes on to say: “In addition to folksongs and hymns, composers such as Bach, Brahms, Mahler, Chopin, 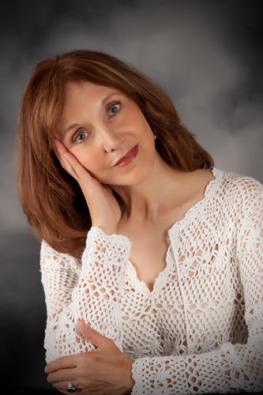 Faure, and Satie strongly influence my music. Many contemporary composers and artists are important to me as well, but there are far too many to name!” Although beyond her strictly musical influences, Kathryn shares: “Nature has always been my primary inspiration in music and in life, but I’m also touched by the bravery and resilience of people I’ve come to know, and by those I’ve only read about or heard of, and may never really know. Simplicity, solitude, and silence are major sources of inspiration as well.”

Also in our interview, I asked Kathyrn about her musical vision, to which she replied: “My loftiest vision is movement toward peace and unity in the world, but my humbler vision is to continue creating and performing music for as long as I can. Oliver Wendell Holmes once wrote: ‘Many people die with their music still in them.’ I’m not sure that it is MY music that’s inside me, because it comes from so many different times and places. But as songs continue to emerge, I want to share them with others and find out where they lead. I know it could sound trite, but I really do feel like a vessel for the music. When I compose or play the piano, alone or accompanied by other artists, the music is EVERYTHING. At those moments, there is nothing else.”

Of the 10 songs on There Was A Time, all but the first two tracks are original compositions by Kathryn. The album opens with the sentimental ambiance of “Saro Remembered,” which is based on an old English folk ballad from the 1700’s that was rediscovered in the Appalachians in the early 20thcentury. A delicate and wistful solo piano melody builds for the first two minutes and is then joined by the soulful cello of Eugene Friesen, who is well known as a member of the Paul Winter Consort. Shortly thereafter, the haunting English horn playing of Jill Haley adds atmosphere to the mix. Jill is a highly regarded instrumentalist both as a studio musician and on her own albums, which I’ve had the pleasure to write about. The nostalgic mood continues on the next track, entitled “Arise,” which is a traditional tune and the second of the two non-original pieces on the album. Here, Kathryn’s elegant piano is accompanied by Charlie Bisharat on violin, who is best known for his playing with Yanni and John Tesh, the French horn of Boston Symphony Orchestra member Gus Sebring, and Tom Eaton on accordion. I must take a moment here to acknowledge Tom, who in addition to being a talented multi-instrumentalist, is also the engineering wizard at Will Ackerman’s Imaginary Road Studios, and co-produced this album with Will and Kathryn. 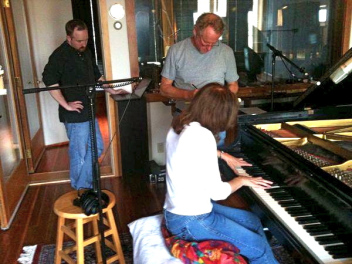 Kathryn in the studio with Will & Tom

From here, all the songs are original compositions, beginning with the title track. Kathryn’s exquisite melody on this piece, accompanied by cello, is heartfelt and touching, with a cinematic feel to it that would be perfect for a film soundtrack. In fact it makes a perfect soundtrack for the misty gray San Francisco winter day outside my window as I write this. However, the fog and the tempo lift on the next song, “Spring Snow,” This is a larger ensemble piece that includes most of the previously mentioned musicians, as well as world famous bassist Tony Levin who plays with Peter Gabriel and King Crimson among others. I particularly enjoyed Kathryn’s rolling arpeggio’s, which created a feeling of snowflakes falling. This is followed by “Wind in the Aspen Grove, a lovely solo piano piece which I’d imagine was inspired by the natural beauty of the Colorado Rockies where Kathryn lives.

On “Shadow of a Bird in Flight,” in addition to the other musicians, the maestro Ackerman himself makes an appearance on guitar, as well as on subtle percussion. This is one piece in particular where, as I alluded to above, Kathryn utilizes space as an element in the music to create a sense of dynamics and drama. Perhaps my favorite title on the album is “Learning to Waltz with Clouds,” which, as the “waltz” indicates, is written in ¾ time. There is a dreamy floating feeling to this song, and along with liking the title, this is one of my favorite tracks as well. I probably don’t need to comment on the feeling of a solo piano piece called “Bittersweet Goodbye,” as the title says it all. The album draws to a close on a pensive note in “Darkening Skies,” which unlike most of the other songs leans towards being more impressionistic and less melodic. Again, the well-chosen title provides an apt description of the song’s mood and tenor.

While there are a range of emotions expressed and evoked on this album, overall the vibe is low key and often understated. Yet within that there is great thoughtfulness and depth of feeling. Kathryn has an interesting compositional style that is not about being flashy or ornate, but is more softly and subtly expressive with a poetic air about it that draws you in. In that regard, I’ll leave the final words to Kathryn who shares: “It’s always my hope that listeners will discover something in what they hear that can take them deeper inside themselves, but at the same time, beyond themselves.”