If the name Blackmore rings a bell, you may recognize it as the surname of Ritchie Blackmore who created one of the most recognizable riffs in rock history: “Smoke On The Water” and ascended the stairway to heaven of guitar stardom in Deep Purple and later in Rainbow over a career spanning three decades. The other half of the Blackmore’s Night name belongs to award-winning songwriter and vocalist Candice Night, an incredible talent in her own right. The couple has been together for close to twenty years. However, you won’t find any fist pumping stadium rock here. What the duo and band members have been putting out since 1989 is an earthy blend of folk rock with Celtic and Renaissance influences, sometimes lovingly referred to as “Ren-rock” by fans.

When they met in the late ‘80’s they discovered a mutual love for Renaissance music and a desire to bring it to a contemporary audience, culminating in their 1998 debut release, “Shadow Of The Moon,” which featured a guest appearance on flute by Ian Anderson of Jethro Tull. On the metamorphosis from his former musical identity, Ritchie says: “I just have an incredible passion for this kind of music and wanted to do it. During my final days in Deep Purple and Rainbow, I felt I was getting stale at writing hard-rock riffs, that I was repeating myself, and I just couldn’t stand it. So switching to this was rejuvenating, very refreshing.” 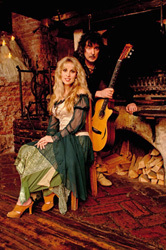 This new album is their eighth studio release and is named for their baby daughter Autumn. According to Candice: ““We recorded ‘Autumn Sky’ a little over a year ago. I was nine months pregnant when we finished it in May 2010. I felt the parallel of creating the music at the same time I was creating a life form. The energy of that force brought the music to another level.” Another level indeed: in addition to the inner experience, the album went straight to the top on the Billboard New Age charts. However, not surprising, given that the previous album of Blackmore’s Night, “Secret Voyage,” debuted on the Billboard charts in the US at number one and held that spot for four weeks in a row, and then remained in the top ten for 72 weeks.

In addition to the impressive vocals of Candice Night, the album features acoustic and electric guitar, keyboards, bass guitar and drums. Also included are a number of instruments that may not be as familiar to some listeners such as hurdy gurdy, bombards, gemshorn, nyckelharpa, pennywhistle, mandolin, rauchepfife, shawms, chanters, and renaissance woodwinds. The couple has an extensive collection of historic instrument gathered from their global sojourns. Rounding out the band with their wonderfully inspired musicianship and authentic sounding stage names are: Squire Malcolm of Lumley (Malcolm Dick) –drums & percussion, Gypsy Rose (Elizabeth Cary) –Violin, harmony vocals, Earl Grey of Chamay (Mike Clemente) -Bass, rhythm guitar, and Bard David of Larchmont – keyboards, backing vocals.

Their music, which bridges the 16th and 21st centuries draws inspiration from nature, mythology, and fairy tales, as well as from their travels. They sometimes perform in European castles and fortresses on moonlit nights, providing an unforgettable concert experience for those fortunate enough to be in attendance. Fans often take advantage of the opportunity and dress up in period costume for the shows. As Candice’s related: “We tour a lot of castles and historical venues and we kind of retain the spirit of a lot of these places and kind of weave the legends and myths and come up with our own blend and our own sound of music that brings the old together with the new.” Ritchie adds: ““We like to get back to a simpler time. It’s nice to shut things down — to unplug from all that stuff and go back to a place where light was provided by a fire. And, there is something special about a maiden in a window and a knight on a horse. With our music, we try to bring people to that escape.”

The music on the CD is wonderfully diverse and includes traditional medieval sounds ranging from melancholy ballads to lively romps, as well as some tunes where the rock influence is more prevalent, once or twice calling to mind the aforementioned Jethro Tull. Speaking to the diversity of their music and the difficulty in categorizing it, Candice says: “We do such a variety of music I don’t think they know where to put us. We have anything from rock to pop to tavern music to gypsy music, to ballads, to cover songs. But I don’t feel like it should be fitting neatly into a box of labels for one type of music and that’s it. It feels so confining.”

The album opens with a rousing rocker entitled “Highland.” There is an excellent video of this song available for viewing on their website which gives a good feel for the vibe of the band, and highlights the charismatic persona of Candice Night. The next song, “Vagabond (Make A Princess Of Me) slows things down and shows their more traditional influences. Tracks like “Journeyman” and “Keeper Of The Flame” give Ritchie’s electric guitar fans a taste of what they’ve been waiting to hear as he breaks into a fiery finger dance on the fretboard of a Stratocaster. The ability to “burn” like that one minute then turn around and play a lilting folk ballad on the mandolin showcases

not only his musical dexterity but also his evolution as an artist. One of the most unexpected inclusions on the album is a cover of “Celluloid Heroes” by The Kinks. I actually like this version better than the original, and while the movie star theme of the lyrics differs from the album in some ways, there is perhaps some universality in the story and their arrangement of it fits quite well musically.

“Autumn Sky” definitely cast its spell on me and I appreciated the band’s commitment to their roots without being bound by them. Diverse elements blend alchemically in the music of Blackmore’s Night and reflect a creative spirit that infuses centuries-old music with fresh energy and vision. 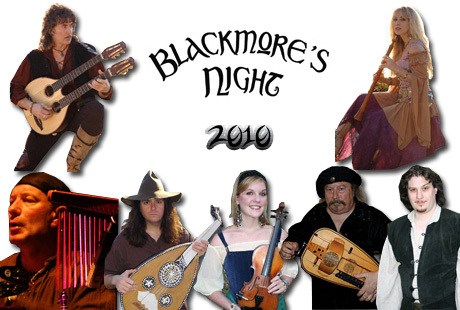