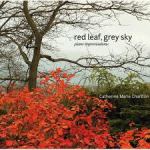 While most parents have to plead, coerce, and cajole their children to practice their musical instrument, Catherine Marie Charlton, who started playing piano at the age of eight, practiced so much that, incredibly, her parents sometimes had to ask her to stop. But all that practice and classical training came to fruition as she developed into a talented recording artist, composer, and improviser who has performed in Europe, South America, and throughout the US, and has even received an accolade from Grammy-winning pianist George Winston who said of her: “Charlton has a unique and beautiful dedication to composing for the piano.”

Her global appearances include a performance of her commissioned work “A Dance for Argentina” at the United States Embassy in Buenos Aires. She has garnered numerous awards, nominations, and chart success, and her four albums are heard throughout the world on a variety of radio programs. Although it’s been ten years since the release of her “River Dawn: Piano Meditations” CD, it still remains one of the best selling New Age albums of all time on cdbaby.com, the web’s largest retailer of independent music.

A lot more could be written about Catherine’s history and accomplishments, but a glimpse into her latest release, “Red Leaf, Grey Sky: Piano Improvisations” beckons. I think the concept of “quality over quantity” is appropriate to mention in that, while the six songs on this recording clock in at just under 25 minutes, it is so rich in content that it doesn’t feel like an abbreviated work by the time you are finished listening to it. Perhaps it would be best classified as an EP (extended play), which is defined as: “a recording with four (or more) tracks of equal importance, though not more than 36 minutes in total.” This seems to be a trend that has been growing in popularity and I’ve been seeing more and more artists releasing in this format.

Catherine has an interesting style on the piano that draws equally from new age, jazz, and classical. Not surprising since among her influences, she includes: George Winston, Liz Story, Keith Jarrett, Chick Corea, Cecil Taylor, Chopin, Rachmaninoff, and Debussy – quite a range of composers from which to draw inspiration. But the way in which she integrates these influences is what makes her special. Overall, her compositions are quite sensitive and lovely, however, every once in a while you hear something in them that makes you aware that she is not afraid to tread closer to the edge musically and let her more left-of-center jazz inclinations show. You get the feeling that in a performance she might easily give freer reign to the more avant-garde side of her musical spectrum, yet in this recording there is but a hint of this. The first and last pieces on the CD are compositions, while the others are all improvisations. 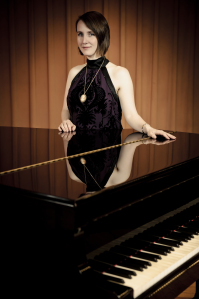 The first song, “Lullaby For Swingtime,” follows an arc of emotion from introverted to effusive. The midsection in particular, has a wonderful upbeat optimistic quality that brought to mind an image of a surfer riding on the crest of a wave.  The second track, “Introspection,” as the title infers, draws on the inner or yin energy, and for me, has a definite improvisatory feel, where you are just going with the flow and not having to know where it will take you. On “Wonder” Catherine becomes somewhat “adventurous” in her chord changes and phrasing giving the piece a more complex and dramatic air that challenges the listener to stretch a bit. An interesting contrast is revealed between this piece and the next, the title track, which is Zen- like in its simplicity and sparseness – the complete opposite of the previous song. Slow and spacious it perfectly captures the misty haze of an overcast day as well as highlighting the range of Catherine’s stylistic repertoire. “Transformation” continues in a similarly subdued mood, yet moves a little to the “outside” as they say in jazz, becoming more esoteric and experimental. Yet, at the midpoint of the piece, and perhaps this is what the title alludes to, there is a definite shift and the music opens up, like sun breaking through the clouds, into a more uplifted space, that is indeed a “transformation.” The daylight continues into the last track, appropriately titled: “The Sun Is Shining, The Birds Are Singing,” the most-lively piece on the album. Quick little clusters of notes, give the impression of songbirds chirping away on a beautiful day as a lilting melody ends the CD on an up-note.

It can be seen from this brief overview that contrasts abound in Catherine Marie Charlton’s music. This is perfectly reflected in one of her photos that she chose for the cover, showing a warm vibrant blaze of color juxtaposed against a somber background. I found this play of opposites in Mother Nature to be quite stunning, and I enjoyed seeing some of Catherine’s nature photography on her website, which as an avid gardener, she has a keen eye for.

Some solo piano recordings can work well as background music to set a mood, while other’s like this one inspire more active listening and ask more of the listener. Those looking for an evocative and eclectic musical journey, will certainly find it in the piano compositions and improvisations of Red Leaf, Grey Sky.” 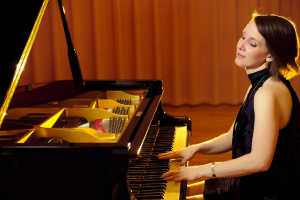