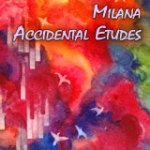 While some composers may spend great amounts of time and effort carefully writing each note and chord change of their music with pencil on notation paper, others choose to create spontaneously according to their inspiration in the moment. Pianist Milana is one of the later, who as poet William Blake described: “kisses the joy as it flies.” The title of her new album Accidental Etudes is descriptive of this aspect of her creative process. In her words: “It never ceases to amaze me how music finds its way to come through us from the world and back into the world. Anything that surrounds us can become the inspiration that ends up being a musical story, a journey on the ivory keys: a sight from a window, a child’s laughter, bad weather, good weather, tranquility of a forest, rumbling storms, pain and happiness, madness within and falling in love. Every time I get a chance to escape to my world of music with a touch on keys, I feel like I discover another improvisation hidden in my effort to compose. These improvisations of mine are purely accidental: they are moments in time that never repeat.”

Given that everything around her can serve as inspiration for her music, Milana has a lot to draw from. In addition to being a pianist, vocalist and music school graduate (with honors), she has had the life experience of living in very different cultures around the world.  Born in Ukraine, Milana lived in Israel for many years and eventually moved to Canada in 2008 where she lives now. Not surprisingly, her music is diverse as well and has been described as “embracing a variety of styles – everything from folk, blues, opera and Middle Eastern, to her soft spots for rock and jazz.” This diversity is actually part of her creative process, as she describes: “It’s fun to go over different genres and moods in some kind of a loop: jazz, blues, rock, classical, ambient, mad, angry, relaxing, meditative, melancholic, contemplative, surreal, and so on, and so forth. Never know what will inspire another improvisation and how it is going to sound.” 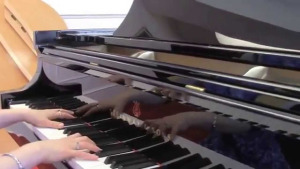 with her original songs (mainly jazz and soul, with piano as the leading instrument). Her music has earned her a number of awards and honors on SoundCloud, ReverbNation, and AudioSparx. As a composer and lyricist, her style has been described as “reminiscent of Tori Amos and Sarah McLachlan.” Much of her musical influence and life experience blend and are reflected within the tracks of her fourth album release, Accidental Etudes.” Among these influences heard on the title track which opens the album is neo-classical, which is not surprising as Milana is a fan of Beethoven. In her words: “One of the reasons why I love Beethoven and am inspired by him – he was among the first ones (if not THE first one) to use piano as a full orchestra, playing both low and high octaves, unlike previous composers who tend to use the mid octaves.”

Some of that keyboard range is heard on the second track, an upbeat tune called “Sunny Keys,” where some of the mid and lower registers are brightly accented by sparkling sounds of the higher octave keys. With a generous 18 songs on the album, there isn’t room within the scope of this article to write about each one, but I’m happy to share, what are for me, some of the highlights. Expressing her individuality is a track called “Dare to Be Me,” which starts off bold and assertive, yet expresses some more reflective sentiments within. Showing what is perhaps a more vulnerable side is a spacious and impressionistic piece entitled “Feel My Pain.” With a bit of jazz influence, this piece brought to mind Keith Jarrett in particular passages. I particularly liked Milana’s performance dynamics and the sense of determination in a piece called “I Won’t Give Up.” A different side of the emotional spectrum is displayed in “The Madness Within,” which as the title implies is quite intense, and reveals her classical influences. On a more contemplative note is “Missing the Sun.” Something I was aware of in this track, as well as in many of her other songs is the unpredictability of her chord changes and the flow of the music. This is a positive thing, and I enjoyed be continually surprised at where the music would go next within a song’s movements as it unfolded. 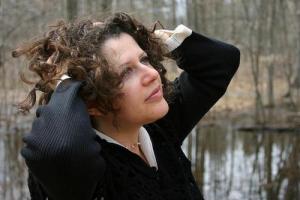 Again, in a case of the title capturing a song’s essence, “When I Am in Love” is a lovely romantic ballad with shadings of pop and jazz elements. This, however, was not always the case. A song called “Dancing with Hades,” was not what I would have expected at all, and certainly did not conjure up any hellish imagery. It was actually quite touching and serene. By the time I got to track 15, “When I Can’t Fly,” I thought I had a fairly good idea of Milana’s stylistic range, but she managed to surprise me once again. On this track, she introduces a bit of dissonance, not heard in her other pieces. It gives the piece a little more edge that some listeners may find adventurous. One of my favorite songs was the stately and elegant “Waltz of a Dying Candle.” I found this one emotionally evocative and I liked the imagery that the title kindled. However, for me, the best was saved for last with a gorgeous piece called “Out of the Dark,” which was moving, full of hope, and a perfect way to end the album.

While this recording is easy to enjoy, it’s harder to classify, given the variety of influences that shape it. According to Milana: “I am not a ‘purist’ when talking about styles and genres, my playing style is a blend of neoclassical, jazz, blues, soft rock and some others. It turns to be quite troublesome to get a review in piano-related magazines for such a ‘non-purist’ piano album. ‘Lovely, but doesn’t fit our format’ is a typical answer.” However, on the other hand, its’ stylistic inclusiveness opens the door to a wider listening audience. I appreciate the improvisational nature of Milana’s creative process and hope she continues to have more musical “accidents” in the future.