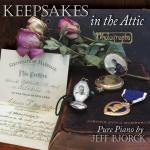 As the title, Keepsakes in the Attic, implies, pianist/composer Jeff Bjorck has created an album filled with nostalgia and treasured memories, both real and imagined. (Note: Bjorck is pronounced as Byork – one syllable, rhymes with “York”) In my interview with Jeff, he spoke about the inspiration and concept for the album: “As I composed the pieces for this CD, I repeatedly imagined myself in the attic of an old house, with sun drifting through a single window, casting a warm light on an old steamer trunk like the ones my great-grandparents used when immigrating from Sweden in the late 1800s. I envisioned myself perusing many of my family’s heirlooms, and it was this vision (also depicted on the back cover) that inspired this album.”

He goes on to say: “As I prepared this CD, the stories seemed to coalesce into a meaningful sequence.  I hope that many of these compositions can prompt some of your own favorite personal memories, rather than merely conveying the sense that you are sharing mine.” I greatly enjoyed the concept for this album and along with the track notes he has provided for each song, I found myself imagining many of the scenarios he described. And while Jeff’s music is instrumental, it is quite visually evocative and conveys imaginative stories in musical notes, rather than words.

In addition to music, Jeff leads a rich life filled with many professional and personal interests. His “day job” is as a clinical psychology professor, researcher, writer, and psychotherapist. In his spare time Jeff enjoys weight lifting, hang gliding, gardening, and photography. While he has 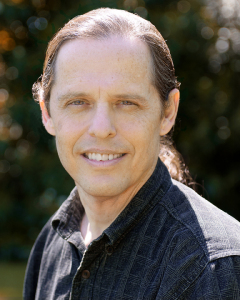 been called a: Renaissance man, in his words: “I believe this is a kind way of saying that I have so many life pursuits that there is not sufficient time to become a true master of any of them.”

The current of inspiration that nurtures his life and music flows from the deep wellspring of his spirituality. In our interview Jeff related: “ My faith is my primary inspiration for all facets of my life, including music and all other forms of artistic expression. I have often said that my creativity merely imitates the Creator. When meeting new people, however, I typically do not immediately disclose my Christian beliefs. Especially today, when Christianity seems to be so often draped in the unkempt garments of politics and hypocrisy, I prefer to let my actions reflect my beliefs. To that end, I have always loved the quote that is often (although probably not accurately) attributed to St. Francis of Assisi: ‘Preach the Gospel always, and if necessary, use words.’”

In this regard, Jeff shares: “My greatest joy, however, is hearing that my music has been a comfort particularly to those who are suffering or grieving. To that end, I believe that my most significant musical accomplishments have been those instances where I have helped to lift someone up. I am especially thankful that, through a cooperative effort several years ago with the nonprofit organization, Guideposts, my music helped to comfort 75,000 hospitalized children and their parents. I have also been deeply honored hearing of a number of individuals who have requested that my music be played during their final days and hours on earth. In short, the same core drive that motivated me years ago to become a psychologist who encourages hurting people also drives my music.” Jeff also gives of himself by doing active service and travel to Africa as well as other parts of the world with Lifewater International, a Christian group dedicated to ending the global water and sanitation crisis. 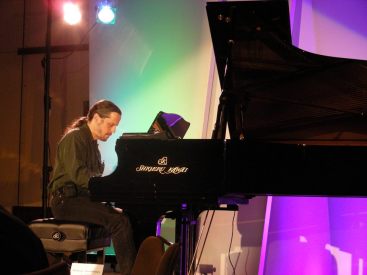 This album is Jeff’s sixth release, following a string of well-received and critically acclaimed albums. Highly-regarded music reviewer Kathy Parsons of MainlyPiano.com calls Jeff’s new album: “His best and most personal album yet.” So let’s climb the stairs to the attic and see what treasures and memories we can uncover. The appropriately named opening track, “Afternoon Reverie,” captures the nostalgic mood one might feel while searching through family heirlooms and the bittersweet memories of loved ones long gone. There is a wistful yet warm ambiance to Jeff’s solo piano melody that provides a perfect introduction to the album. This feeling continues into the next track, Returning Home,” which as Jeff says: “…was inspired by the times I found myself driving from far away back to my hometown and to the house where I grew up.” There is a sense of forward motion in the melody that captures the feel of driving, as well as a sense of anticipation in getting closer to home.

Not surprisingly Jeff’s spirituality and his fascination with the past come together in his love for traditional Christian hymns. In fact, his 2008 album is titled: This I Know: Ageless Hymns of Faith. This is further reflected in a track called “Mother’s Hymnal,” which evokes this memory for Jeff: “We always went to church as a family of five, and I would typically sit next to my mother. I can still hear her voice in these memories.” There is a tinge of “old time religion” in this piece, as well as bit of a wistful air. And speaking of family, I was moved by the tender heartfelt strains of a composition entitled “Grandad’s Rocker.” With 13 tracks on the album, there isn’t room to go into detail about each one, but what follows are some of my highlights and favorite moments.

An ethnic ambiance is embodied in “Midnight in Moscow” which Jeff describes in this way: “This is another composition inspired by imaginary recollections. Here, I picture old plane tickets being lifted from the steamer trunk, wrapped in brittle tissue paper inscribed with the words, ‘Father’s Russian adventure.’” (See the video below for a live performance of this track.) Another composition with a “father” connection is “Hope in the Heartache” which expresses the grief Jeff felt after his dad’s passing. However, as the piece evolves, it moves into a lighter and more hopeful space, as the title alludes to. Yet another song that connects with this paternal theme is “Playing Catch with Dad,” which Jeff describes as one his “favorite boyhood pastimes, 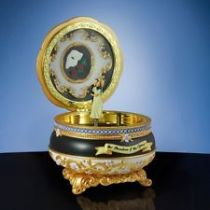 ” and one that I can relate to from my own experience. While nostalgia is often tinged with wistfulness, here it takes on a more upbeat feeling. The album concludes with a lovely little piece called “Nana’s Music Box,” that recalls the love in a grandmother’s eyes as her grandchildren lift the lid on her antique music box to delight in it’s enchanting song. According to Jeff, “I chose to end this melody by figuratively leaving the lid open so the echoes and memories can continue on in the listener’s heart.”

In today’s world where there is so much fascination with “the latest thing” or what is on “the cutting edge,” I found Jeff’s appreciation for the past to be refreshing. In his words: “I certainly find much to value in our current day and age, but given its increasingly frenetic pace, my love for, and sense of connection with, the past has only grown.” With regard to his music, Jeff shares: “I believe my playing often has more in common with the feel (but not the skill!) of composers like Satie, and Debussy, and even a bit of stormy Beethoven, rather than New Age composers. Given my love of nostalgia, I suppose it is no surprise that I gravitate toward “Old Age” music!” Keepsakes in the Attic is a warm-hearted musical journey that I greatly enjoyed taking and particularly appreciated the wide range of emotions portrayed within its beautiful melodies. Jeff Bjorck is a talented and expressive pianist with a particular gift for sharing evocative stories in song.