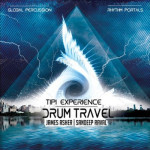 World Music and percussion fans, be forewarned: when pressing “play” on the new release by James Asher and Sandeep Raval, keep a firm grip on you socks so as not to have them knocked clean off. I was about to say that “this is one seriously powerful recording,” although the reality is that is actually two recordings – a double album; something you don’t find very often these days. But Drum Travel offers some of the most mind-blowing, earth-shaking percussive energy and cross-cultural influences that I have encountered in quite a while.

Having been a music journalist for over 30 years, James Asher is a name I am well familiar with, 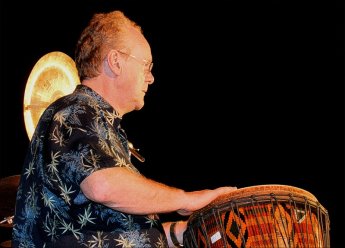 going back to 1989 when I wrote a magazine review of his first commercially released album entitled The Great Wheel. I didn’t know it at the time, but prior to that recording, James’ career was already in full swing having done studio work in London with rock music icon Pete Townsend of The Who. As time went on, James’ musical directions diverged in various ways. One was along the lines of his growing interest in holistic health composing meditation music for a company called Aura-Soma that focused on color therapy and healing. However, James is probably best known for his recordings in the World Music genre with best-selling albums like Globalarium, Feet In The Soil, and Tigers Of The Raj – which Pete Townsend described as “utterly magnificent.”

James credits UK based multi-percussionist Sandeep Raval as being “very helpful in both increasing my understanding of the (Indian) music, and introducing me to many excellent 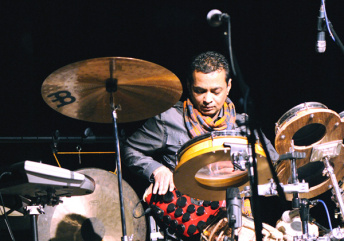 Indian musicians in the UK.” In addition to collaborating with James on Drum Travel, Sandeep also has other albums to his credit, including Worship Through Sound and Mosaic in Motion. He also played an invaluable part in the production of Andrew Lloyd Webber’s acclaimed musical, Bombay Dreams (scored by A R Rahman – Slumdog Millionaire). Sandeep has performed on stages around the world, and is proficient on a wide range of percussion instruments in many genres. Together Sandeep and James make for a formidable collaboration that blends diverse cultural and stylistic influences into a mesmerizing musical mélange that includes Worldbeat, Latin, ecstatic dance, shamanic, jazz, blues, Indian folk, meditative and Native American.

In speaking about their relationship, James shares: “Sandeep Raval and I go back a long way. He was the person that helped me source a lot of the fine musicians that joined me on Tigers of the Raj. After many years of being friends we also started performing live together at ecstatic dance events in London. Drum Travel is an ambitious undertaking indeed! 18 months in the brewing, it just seemed to need to continue to that point to feel complete. Even if the average attention span is apparently now 8 seconds.”

As the curtain rises on the first of the two discs, the intro to track one, “Fugira,” with its drums and bass, flashed me back to Santana at Woodstock with their epic version of “Soul Sacrifice. But it soon evolves into it’s own unique direction, which does include some propulsive rhythm guitar by Simon Brewin, who also plays bass on the album. It additionally features Italian language vocals by Carolina Maggio, who is an integral part of the recording, particularly on the second disc. This is followed by an all-drums and percussion piece called “Takita,” that lays down a funky and intricate groove. “How It Feels” is another vocal track featuring Carolina, this time in English, that while also percussive, has a more orchestrated feel than previously heard. It’s not hard to imagine from the title what the percussion-only vibe of track four, “Bring on Brasil,” might be. This is one of a number of shorter, approximately two and half-minute pieces that are like sonic sorbet between some of the longer tracks.

Despite it’s title and bluesy chord progression, “Beside the Blues,” is actually quite jazzy with its 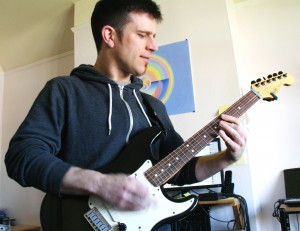 Wes Montgomery/ George Benson-style guitar octaves. Along with some tasty lead guitar and fretless bass solo, this tune is a nice up-tempo showcase for the talents of fret-master Simon Brewin. Also in this vein is the smoking hot “Chilli Pickle Chaser.” James and Sandeep throw all kinds of percussive and cultural ingredients into their musical mixmaster on “Percussive Kitchen” and “Drums for the Dragon.” Without the inclusion of any melodic instruments, the phenomenal drumming skills of this dynamic duo really stand out. According to James: “We make a good team. Sandeep does the flowery energized and technically challenging parts while I keep the backbeat going and am thinking of the overall shape etc.” Sometimes it is hard to tell who is playing what, but suffice it to say James and Sandeep are both master drummers in their own right.

After an intro of spacey synthesizers and down-tempo chill groove, the music breaks into a reggae beat with Italian spoken word and sung lyrics by Carolina. I had been waiting for a song that highlighted the tabla drum virtuosity of Sandeep Raval, and a track called “Pappadoms from Persia” delivered it on this fast-paced Eastern-flavored composition. Very tasty! The last two tracks, “Breaking Good” and “Seven Veils” are the longest on this disc at approximately ten and fourteen minutes respectively, and allow the ensemble to stretch out to explore diverse and exotic musical landscapes. All in all, Disc One represents quite an eclectic collection of tunes with stellar performances by all involved. 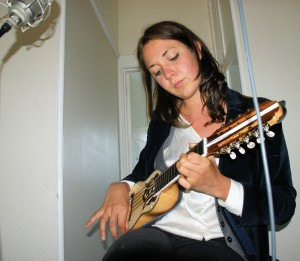 According to the liner notes: “On the second disc, subtitled TIPI Experience, “the rhythmic journeys deepen. Drum Travel draws on many profound rhythmic traditions to illustrate the ability of drums to ease and empower transformative personal journeys that can have extraordinary and life-changing impacts on the traveler.” As mentioned, Carolina’s presence is particularly felt here on songs like “Neptune Skank” and “How It Feels” on which she plays a small Andean stringed instrument called a charango that is similar to a ukulele. A different cultural, yet equally earthy vibe is conjured on “Hey Wanaina” with its tribal drums, Native American chanting, and addition of The Gathering Sound Community Choir. Powerful percussion and orchestration combine on a fast-paced tune called “If the Earth Could Speak.” As the title implies, a song called “Accelerando” starts off leisurely and gradually picks up speed featuring an interesting vocal interpretation by Praful Dave. One of my favorite pieces on this disc was “The Great Transition,” that highlights an intricate arrangement and diversity of instruments. Incidentally, in addition to the four core members of this group, at least ten other musicians make appearances on various tracks, including world-renown drum circle leader Arthur Hull. At a half hour in length, the final song, “On the Outbreath,” is the most ethereal piece on the album and makes for a wonderfully dreamy meditative experience.

As someone who appreciates percussion and rhythm, I can’t speak highly enough about the 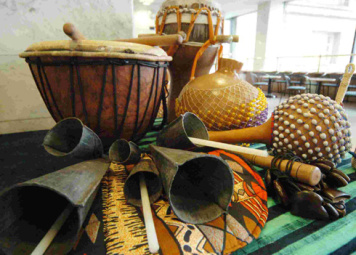 incredible talents of James Asher and Sandeep Raval. Both are highly accomplished drummers and the synergy of their work together is even greater than the sum of its parts. The intricacy of their patterns and the way the two musicians flow together builds a convincing case for the existence of telepathy. They also both play keyboards on the album, and as mentioned, there are stunning contributions from Carolina and Simon as well, but as the title alludes to, drums are king here. And its not only the skills and percussive dexterity James and Sandeep have built up over the years, but the wide range of musical styles they apply them to throughout the recording. Also, as the title hints, Drum Travel would be the perfect music for driving or a road trip, as well as for dancing, exercising, moving meditation, or just an exhilarating up-tempo listening experience. Drumming is like the heartbeat expressed in music, and James Asher and Sandeep Raval energize this pulsing multi-cultural body of work with life force and sonic spirit.