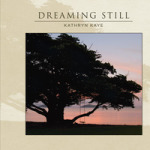 Maybe it’s the rarified air of the higher elevations, but there’s something about the magic of the mountains that seems to inspire the vision of artists and musicians alike. So it is with gifted pianist Kathryn Kaye, whose roots are in the Appalachians and her branches are in the Colorado Rockies where she currently lives and draws deep inspiration from. The folksongs and hymns that she heard growing up in southeastern Kentucky were fertile soil for her musical growth, which began at the tender age of four as she began playing piano. The seeds of those early days took root as she went on to major in college and later perform as a pianist and vocalist in a genre-spanning career that ranges from folk to opera and beyond. Additional musical training in Germany only served to nurture her blossoming skills.

All of which brings us to the present moment and the release of her first CD, “Dreaming Still.” It seems these days, with the advent of computers and recording software, that so many first albums are self-produced in home studios. Not that there is anything wrong with that of course, but Kathryn Kaye has taken a giant step further… more specifically to Vermont. There she was guided in manifesting her musical creation by none other than Will Ackerman, the Grammy winning guitarist and founder of the legendary Windham Hill record label, which was home to many of the finest musicians in acoustic new age music. In the wooded sanctuary of the famed Imaginary Roads studios, Kathryn flourished creatively, aided by the production team of Ackerman and mastering engineer Corin Nelsen. Working in an environment such as this has its perks, not the least of which is the opportunity to enlist the accompaniment of some world-class musicians. Among them was one of my favorite violinists, Charlie Bisharat, who has toured with the likes of Yanni, John Tesh, and numerous others. Also adding to the talent pool on strings were virtuoso cellist Eugene Friesen and bassist Dan Greenspan.  Further instrumentation included Jill Haley on English horn, percussion by Derrik Jordan – along with Ackerman and Nelson, as well as a bit of vocals on one song by Noah Wilding.

With a stable of talent such as this, it’s easy to imagine the music becoming overwhelmed by complex arrangements and over production. However, this is far from the case. In fact a number of the album’s 14 songs are solo piano or duets, with the accompanist adding subtle but tasteful touches to accentuate the evocative simplicity and melodic beauty of Kathryn’s compositional style. I think that listeners who enjoy the expressive keyboard artistry of David Lanz, George Winston, or Liz Story would find a lot to like in the music of Kathryn Kaye. “Dreaming Still” is an impressive effort, made even more so by the fact that it is Kathryn’s first. Luckily we won’t have to wait long to hear the second, as she already has plans to come down from the mountain and head back to the forests of Vermont to pursue another step in her unfolding musical journey.  If this album is any indication, it will be something to look forward to.