There can be little question as to the source of Kathryn Kaye’s creative inspiration. The beauty and mystery of nature have always played prominently in her artistry. Even the title of her latest release Patterns of Sun and Shade reveals her fascination with the natural world. Of this she shares: “I’ve always been fascinated by sunlight filtered through leaves or bare branches, the play of light and shade in clouds and high mountains, and shadows on a rock wall or on a narrow path winding through the woods.” There is no doubt that her home in the Rocky Mountains of Colorado provides an endless bounty of natural splendor, where she captures its essence in music and photography. However, another source that feeds into her musical wellspring are the hymns and folksongs of the Appalachian Mountains of southeast Kentucky, where she grew up.

Listening to the music of Kathryn Kaye, for me, evokes the same feeling of comfort and warmth as a reunion with an old and treasured friend. This is the fourth album of hers that I’ve had the pleasure of writing about. Previous recordings include: What The Winter Said, Heavy As A Feather, and her debut release Dreaming Still. GRAMMY winning producer and Windham Hill Records founder Will Ackerman, who has produced all of Kathryn’s albums has said of Kathryn’s music: “Some of her pieces feel so hauntingly familiar that they seem like part of your DNA.”

In an interview with Kathryn, I gained some interesting insight into her music. In her words: “Most of the listeners of my music describe it as soothing, but a few have commented that it conveys a sense of longing. Immediately after listening to one of the songs, one listener turned to me and asked, ‘What are you longing for?’ I believe the music conveys both comfort and longing, at least in part because it was inspired by the very old folk ballads and hymns that I heard, sang, and played while growing up in the mountains of Eastern Kentucky. Those beautiful old songs often carry a message that includes a mixture of hope, loss, sadness, peace, and longing.” This blend of contrasting emotions make Patterns of Sun and Shade the perfect title for her music. 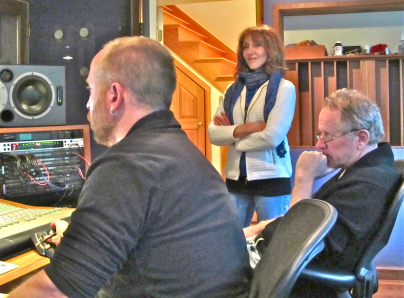 Tom, Will, & Kathryn in the studio

The album was recorded at Will Ackerman’s Imaginary Road Studios in Vermont, where he, along with Tom Eaton and Kathryn co-produced the recording. There is certainly no shortage of breath-taking natural vistas there either in the beautiful rolling hills of Windham County, Vermont. There is also an abundance of world-class studio musicians in Will’s roster to add accompaniment to the compositions of artists who record at Imaginary Road. On Kathryn’s album, the list includes Paul Winter Consort cellist Eugene Friesen, percussionist Jeff Haynes of the Pat Metheny Group, violinist Charlie Bisharat who plays with Yanni and John Tesh, Peter Gabriel touring musician Tony Levin on an exotic electric stringed instrument called the Chapman Stick, and frequent Will Ackerman collaborators Jill Haley on English horn and Gus Sebring on French horn. Engineer/ producer Tom Eaton who is a fantastic musician in his own right also provides additional instrumental support, as does Will himself.

While mountains and memories provide a good deal of inspiration for Kathryn, the opening track, “Julia’s Eyes,” is drawn from even closer to home. As Kathryn tells it: “I wrote this song for my daughter, who was born with the largest and most beautiful pale blue eyes I had ever seen. She’s grown up now, and her eyes are still a striking shade of blue!” Starting out on solo piano and evolving into a duet with cello, the piece is written in ¾ time as a waltz, and as such, has an elegant and graceful ambience.

With five musicians in addition to Kathryn, the next composition, “Elk Creek in the Fall” is one of the largest ensemble pieces on the album. It also has a lovely story that Kathryn shared: “By an old dirt road near my childhood home in southeastern Kentucky, a little creek trickles down from higher in the hills. It winds gently through groves of deciduous trees (glorious in autumn), past an old family cemetery and the remains of an abandoned cabin where I once sat by the fireplace with friends, playing and singing folk songs during an autumn thunderstorm. I remember the dinner bell on a tall post in front of the cabin, and sometimes when I play or hear this song, I imagine the resonant gong of the bell at dusk. The musicians who joined me on this recording didn’t know the stories behind it, but nevertheless, were able to capture the images and memories perfectly.”

In contrast, “Something Like a Dream” is a solo piano piece, and according to Kathryn: “This 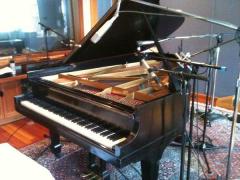 song feels like a dream to me as I play it. It’s one of the few compositions on the CD that isn’t directly connected with nature, and it wanders in and out like the patterned images of sleep.” In addition to Kathryn’s wonderful playing, the song also highlights the incredible highly modified Steinway piano that is the crown jewel of Imaginary Road Studios. The lower registers of the keyboard are remarkably rich and resonant, providing a strong foundation for the lighter midrange and higher melodies to dance upon. It is quite stunning to hear someone of Kathryn’s sensitivity take full advantage of its stellar tone.

One of my favorite tunes on the album is “Adrift in Fading Light,” not only for the music, but for the title as well. I love the evocative mental picture it creates. According to Kathryn: “A visual image and the experience of drifting on a still lake at dusk were with me when I wrote this song.” This piece features some of Kathryn’s most impressionistic piano work, along with subtle accompaniment on percussion, bass, guitar, and violin. 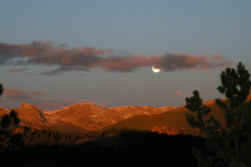 I also liked the image of a song entitled “Tiny Sliver of a Moon.” The piece has a romantic air tinged by a trace of longing, as mentioned earlier. An interesting touch was the addition of accordion played by Tom Eaton. As Kathryn shares: “I think the moon in all its phases holds some magic for us all. The melody in this composition is drawn from a folk song that I don’t remember, and the entrances of the accordion and violin near the end of the song seem to bring together the spirits of people in different parts of the world.” 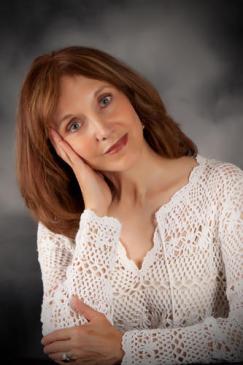 Patterns of Sun and Shade is another stunning recording from a gifted musician who has consistently revealed the depth her artistry and vision with each successive release. In Will Ackerman’s opinion: “Kathryn Kaye is as talented a composer and pianist as any with whom I’ve ever had the pleasure to work.” That is high praise coming from a producer who has worked with some of the best. Although classically trained as a pianist, Kathryn’s style is her own, and above all else, articulates the language of her heart. Sometime the softest, simplest melody speaks volumes emotionally and resonates with the listener in the most profound and personal of ways. The sensitivity heard in Kathryn’s playing is not something that can be taught, but comes from deep within. Like the album’s title, the music expresses both light and shadow in subtle shadings and more saturated colors. I’ll leave last words to Kathryn who in reaching out to Patterns of Sun and Shade listeners shares: “May you discover your own patterns, even if very different from my own, when you listen to this music!”