I’m trying to imagine the experience of having an album produced by one of your musical idols. I know that if Carlos Santana produced my next release, I would certainly have that dream-come-true experience. But for guitarist Vin Downes, that dream became a reality when he had the opportunity to work with Grammy winning producer and Windham Hill Records founder, Will Ackerman. Although Vin’s early musical interests were in electric guitar, a paradigm shift occurred when he heard the opening notes of David Cullen’s “Along the Way” on a Windham Hill guitar sampler. From that moment, everything changed and Vin immersed himself in the fingerstyle guitar music of artists like Will Ackerman, Michael Hedges, Alex de Grassi, Leo Kottke, and David Cullen in the late 1980’s – a golden age for these acoustic excursions, thanks in great measure to the efforts of the maestro Ackerman and his genre-defining record label. However, in addition to learning by ear from listening to these seminal recordings, Vin went on to earn a degree in classical guitar performance and music education from William Paterson University. Beyond this, he has also studied Celtic music at the Irish Arts Center of Manhattan, as well as learning and performing Indian tabla with Ustad Kadar Kahn. This certainly represents a well-rounded education, which later extended to American roots music, jazz, and improvised music.

Since that time, Vin has released three albums, including his brand new one, Unlike the Stars. His first two albums were well received and garnered an award in the Great American Song Contest, as well as placements in film and TV. Vin’s new release, however, takes it to the next level and provided him an opportunity to write and record with Will Ackerman at his famed Imaginary Roads Studio in Vermont – a facility that has seen some of the finest musicians in the world pass through its doors. And speaking of which, a number of them were special guest accompanists on this recording, and will be mentioned in the discussion of individual tracks.

The album opens, most appropriately, with a piece called “Where I Began.” Right from the start, I could tell that Vin 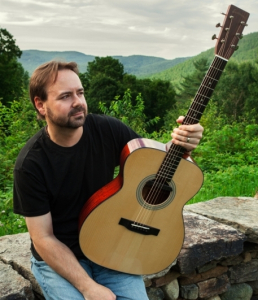 has a well-crafted sense of dynamics, which creates an artful balance between his sometimes-intricate fingerstyle technique and the use of space. I quite liked the chord progressions he used which I found emotionally evocative. The song starts off with solo acoustic guitar, but is joined after about two minutes by bass virtuoso Tony Levin, who is known worldwide for touring with the great Peter Gabriel, as well as with King Crimson and others. Although Tony is capable of jaw-dropping bass playing, his approach here is more minimalistic and provides just the right accents where they are needed. This is a lovely piece and makes for a wonderful entrance to the album. Going with the flow, we come to “Riverbend,” a sweet solo guitar track. A more wistful air is felt on “Dark Blue Wind,” another solo piece with a haunting melody. One thing I was aware of in listening to Vin’s fretwork is how, between creating a bass line on the low E string, and complex finger picking patterns on the other strings, it often sounds like more than one guitar playing.

On a track called “Departure,” however, there actually is more than one guitar playing – in this case, Will Ackerman himself. Tony Levin adds his bass as well. It’s a peaceful pastoral tune highlighted by exquisite interplay and echoes the classic Windham Hill sound that so many know and love. Cellist Eugene Friesen, who is best known as a member of The Paul Winter Consort, accompanies Vin on the album’s title track. The composition is quite spacious by comparison, starting off, like most of the tracks, with solo guitar. As the cello comes in the effect is moving and deep, adding a soulful presence to the piece. Eugene is a frequent guest on Will Ackerman-produced projects and his sensitive playing is always a welcome addition. Another frequent guest is Tom Eaton, this time on piano, who joins Vin on a track entitled “Skies and Openings.” Tom is actually the recording engineer at Imaginary Roads Studio, and often provides accompaniment on a wide variety of instruments on many of the albums that Will produces. At the end of this feature article, there is a music video of an earlier solo version of this song. It is interesting to actually see Vin playing the guitar, and I am most impressed by how effortless he makes it look.

Delicate arpeggios trace a dreamy chord progression on “Window Looking Back,” an impressionistic guitar soundscape that is traversed by the flute of David Watson. I was particularly aware of the balance of the woody, earthy tone of the guitar and the light airy flute. David Watson has extensive credentials in the music industry having performed and toured with Alicia Keys, Mariah Carey, The Rolling Stones, and many more. On a track called “Unweaving,” I thought I detected faint traces of Vin’s earlier explorations into Celtic music in particular passages. Perhaps my favorite selection on the album is towards the end and is entitled “Turning Years.” This one features the ensemble of Vin on guitar, bassist Tony Levin, and David Watson on flute. The way that David multi-tracked both flute and alto flute together gave an intriguing, almost horn-like quality to the sound that was quite unique. 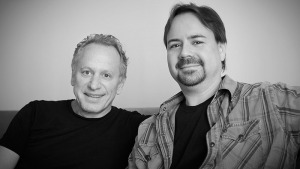 Will Ackerman and Vin Downes

While Vin’s guitar playing is impressive and can range from tastefully understated to dazzling, I am equally impressed with his skills as a composer. Vin has a wonderful sense of composition that brims with emotional content. I enjoyed all the many different spaces he explores, not only from one track to the next, but even within the boundaries of a single song. I must reiterate that his use of dynamics is impeccable, and I appreciated how he uses space to allow a composition to breathe. Obviously, I’m not Vin’s only fan, and I’ll leave the last words to Will Ackerman to share his perceptions: “Vin Downes is such a brilliant guitarist and such a heart-felt composer that it leaves little room for the producer to do much except try to convince himself that he was indispensible. I wasn’t. Vin is a consummate player who draws upon a wide variety of styles. The marvelous thing is that his musical voice is unique enough and powerful enough to hold these different threads together seamlessly. This is as impressive a recording as one could hope for.”