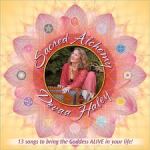 Although “kirtan” or Indian devotional singing has existed for centuries, it has been enjoying a renewed popularity, especially in the new age community. The music of Devaa Haley, which finds some of its roots in this ancient tradition, also brings a contemporary perspective to the mix. The thematic vision of “Sacred Alchemy” is the exploration and expression of wisdom and power of the sacred feminine. The album musically reflects 13 faces of the Goddess, including including Tara, Kali, Mary Magdalene, Isis, Aphrodite, Pele, and others.

While some of the songs lean towards the traditional, others include ambient grooves, electronica, and world percussion. I found this synergizing of various influences to be most appealing and I especially appreciate the tangible spiritual energy that permeates each and every track. Devaa truly uses her music as a vehicle for the expansion of consciousness and the re-awakening of the sacred feminine – something that is greatly needed in our world today. 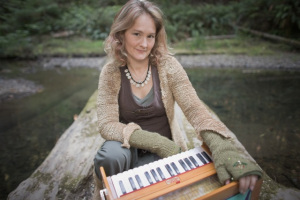 organ), the album features a cast of incredible musicians and singers including Suzanne Sterling, Sarah Eden Davis, Sonja Drakulich from Stellamara, and others. Also of note is an all-star group of producers including Geoffrey Gordon, Ben Leinbach, and Christopher Krotky who also lent additional music support on keyboards, guitars, percussion, and more. The music has been described as ranging “from sexy and untamed (great for dancing) to reverential and tender (perfect for yoga).”

As one might expect from a CD with the title “Sacred Alchemy” there is a communion, not only of ancient and modern, but also of diverse spiritual and cultural traditions such as Hindu, Buddhist, Sufi, Christian, Egyptian, Greek, Hawaiian, etc. This album certainly achieves its goal of “expressing the glory of God/Goddess and love for Spirit embodied in us all that surrounds us.”

This theme of unity and communion is also reflected in her work as the founder of the Inspiring Women Summit (www.inspiringwomensummit.com), which is a virtual gathering of 55,000 participants from more than 160 countries. According to Devaa: “This is perhaps the most exciting time in history to be a woman on this planet. We are part of the vanguard of a new era, one in which women and feminine qualities are restored into partnership with the masculine. While it’s true that our world faces many crises, never before as women have we had so many tools, resources and freedoms to wake up and consciously evolve ourselves, and the world around us. So many of us are realizing that we DO have the power to shape our destiny and usher in a new society — one based on principles of love, cooperation and peace.”

While the focus of this album is undoubtedly on female energy, it is important to remember that each of us, no matter our gender, has male and female qualities in varying degrees, and that the awakening of the sacred feminine is of great value to all humanity In our quest to become whole and balanced beings. With reverence for musical traditions of the past, Devaa Haley breathes new life and fresh energy into the devotional music of kirtan, and imbues it with her own unique perspectives on Goddess archetypes. “Sacred Alchemy” is music with a mission.