Veteran musician Ray Spiegel and his Woodstock, NY-based ensemble have recently released an exciting world music album entitled Moksha. The word “moksha” is a Sanskrit term that means liberation or release. This is most appropriate in that the music, while based in traditional Indian Ragas and rhythms, breaks free from strict classical forms by integrating “the full spectrum of moods, grooves, and tempos of East and West from hard driving dance beats to meditative spiritually oriented music.”

While many Western musicians dabble with the exotic sounds of the East, Ray Spiegel has an extensive formal education that is impressive, to say the least. Although he started his musical journey on clarinet at the age of six, Ray went on to learn a wide variety of instruments including Indian folk drums, vibraphone, marimba, and assorted western and Asian percussion. However he is best known for his mastery of the Indian tabla drums. Ray is one of the few Americans who have learned the art of tabla in the traditional style from tabla master Ustad Alla Rakha, who often accompanied Ravi Shankar. Among Ray’s other teachers and inspirations is tabla virtuoso Ustad Zakir Hussain, who I once had the pleasure of seeing in concert with jazz-fusion guitar virtuoso John McLaughlin and his landmark world music group Shakti. As early as 1970, Ray began his formal training at the Ali Akbar College of Music in San Rafael, CA. He also spent time in New Delhi, India learning his craft. In addition, Ray studied vibes with world-renown jazz musician Bobby Hutcherson and honed his technique around the New York metropolitan area and the San Francisco Bay area. As such, he is equally at ease performing tabla in a classical concert in India as he is playing vibraphone in a club in New York. 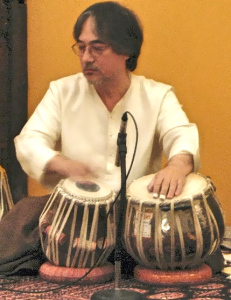 Over the years, Ray has had a diverse and distinguished career that includes presenting lecture-demonstrations, master classes, and performances at Julliard, Harvard, Dartmouth, Colgate, Amherst, Bennington, and the New School of NYC, to name but a few, as well as receiving prestigious grant awards from the National Endowment for the Arts, and the American Institute for Indian Studies (Smithsonian Institute) to further his study of tabla. He has also composed and recorded film and television soundtracks. Ray’s performing and recording credits vary widely and include Paul Winter, Zakir Hussain and the Rhythm Experience, The Grateful Dead, Patty Smyth, Mickey Hart and the Diga Rhythm Band, Gabrielle Roth, Bon Jovi, Bill Cosby television productions, and many more. The members of the Ray Spiegel Ensemble have equally impressive credentials, as we will soon see.

The title track opens the album as a dreamy ambient soundscape sets the stage, and serves as a fuse for a propulsive drum track that positively ignites after about 30 seconds. This polyrhythmic groove features three very different drummers, including Ray on tablas and percussion, Junior Gabo Wedderburn on djembe and conga’s, and Frank Velardi playing a full Western drum set. The rhythm absolutely cooks as the three lock into the beat, each in their own style, sweeping the listener along in an earthy current of sound. One of the first things that really caught my attention was the combination of tablas and drum set. It’s unusual to hear them together, and I enjoyed the way they interacted with foundational rhythms and fills, as well as with the congas. Additional percussion was provided by Robert Levin. A highlight for me was the breakdown in the middle where Ray performed an impressive tabla solo in the traditional Indian style where a vocalization of the rhythm pattern precedes the playing of it, becoming increasingly intricate as it evolves.

Holding down the bottom was well known bassist Ira Coleman whose credits read like a who’s who in the top echelon of jazz (Herbie Hancock, Tony Williams, Freddie Hubbard, Wayne Shorter, and more). Recently he has been playing with Sting in concert and recordings. The melodic elements of the track are created by Ramesh Misra on sarangi, a short violin-like instrument and Stephen James playing the sarod, which is roughly like a cross between a sitar and a guitar. Ramesh is considered to be one of the very top sarangi masters in India, who a few years ago, stepped out of his traditional role to record a track on an Aerosmith album. Stephen James, a student of Ravi Shankar, was a close friend of Ray who passed away at the age of forty-nine. The recording is dedicated to his memory. These players appear on a number of tracks on the album, along with additional accompanists.

The second track provides a chance to catch our breath as Ray performs solo on a multi-tracked drum piece featuring tabla and manjira (small hand cymbals). The ensemble plus Stan Scott on harmonium, kicks back in on track 3, “Soul At Sunrise,” a mostly mid-tempo excursion that picks up steam as it goes. Between this piece and the first one, I got a feeling of the music having something akin to an Indian-flavored Grateful Dead jam in the way it seemed to flow organically rather than adhering to a strict compositional structure.

On the album’s other solo track, “Tal Sawari,” Ray integrates East and West by combining tabla drums and marimba. The remaining four tracks are ensemble pieces, mostly up-tempo, except for the final one. Highlights include an all-star percussion jam on track 6, “Connect The Dots,” where four drummers participate in a call and response pattern, or “trading licks,” as they call it in the blues. But speaking of jams, at over fourteen minutes in length, the album’s longest track, “Wild Mushrooms At Telluride,” takes the listener on a trip that evolves through a layers of rhythmic and sonic spaces. Very cool! Things slow down considerably on the last composition, appropriately titled “Farewell.” This piece was written by Barun Kumar Pal, who plays a Hansa Veena, or Hindustani slide guitar. In addition to the aforementioned accompanists, this one also includes Melanie Richeson on harp. In contrast to the mostly upbeat songs on the recording, “Farewell” has a dreamy wistful air to it that provides a glimpse of the ensemble’s range.

Anyone who appreciates Indian or World music, and percussion in particular, will love Moksha. The level of musicianship is exceedingly high throughout, and I was often blown away by the incredible speed, dexterity, and mastery of Ray on the tabla drums. But equally impressive was the intricate interplay between the various instrumentalists. The Ray Spiegel Ensemble puts their own unique spin on Indian music that is charged with creativity and the integration of non-Eastern elements that make for an exotic listening experience.