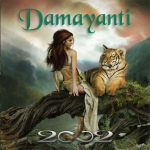 Perhaps it wasn’t Sgt. Pepper who taught the band to play, but it was just about 20 years ago today that recording artists Pamela and Randy Copus, known collectively as 2002, began their musical career together. Looking back over that time they have created an impressive legacy that includes 14 albums – 9 of which have been on the Billboard Charts for a total of 270 weeks during the past 10 years. Described as: “classically tinged melodies, dreamy flutes, crystalline piano, tender strings, celestial choirs, harp, and acoustic guitar,” this portrayal gives an idea of the elements involved, yet in the listening is revealed a spiritual and sensual sonic alchemy that provides some of the most elegant and evocative music in this genre that I have ever heard.

Having been familiar with their music over the course of their career, I was delighted to receive their latest release, “Damayanti.” If there was ever a soundtrack in search of a film this is it. Actually, there is a narrative that goes with the music – “a love story as old as time, in which Princess Damayanti and Prince Nala challenge the gods themselves to keep their love alive.” The plot unfolds instrumentally song by song, each accompanied by a paragraph in the CD liner notes that sets the scene. I enjoyed reading along with the music to get the synergy of the sound and story. It’s not surprising that there is a cinematic quality to their work. As Randy explains: “Our music has always had great commonalities with film soundtracks. The new album takes this style to a new level for us. Many of the albums we’ve produced over the years, particularly the earlier works, have been centered on stories. We returned to this form with Damayanti. There are lush string orchestrations and those emotional ‘moments’ in the music that are the hallmark of movie scores.” When asked what makes the melodies on Damayanti different from earlier albums, Pamela replied: “It’s a microcosm of the 2002 career. The many avenues we’ve explored over the past 19 years are all represented in this one release. It brings it all together.” 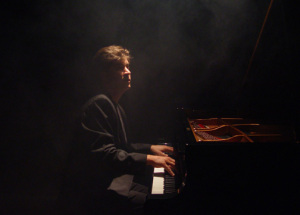 It’s hard not to overuse the word “lush” in describing the acoustic opulence this music is imbued with. The rich sonorous strings that open the album on “Forever My Love,” cue the listener that an extraordinary journey in sound has just begun. This grand entrance gives way to ethnic elements on the second composition, “ Flight Of The Swan” as the mystical strains of Indian tamboura and rhythm of tabla drums create an Eastern ambience before a contemporary drum track and luxuriant orchestration come sweeping in. Riding that wave is some tasteful and tone-full guitar work by Randy on this upbeat composition. The mood slows on the next track – the appropriately named “Beauty And Grace” with its’ regal and resplendent air.

On “Challenge From Heaven” Randy’s haunting piano weaves a melody through a tapestry of strings and celestial choirs which, incidentally, are created by recording their voices many, many times and layering them to create a “virtual choir” with an angelic quality. All of this sound sculpting is done in their state of the art studio, which as a music producer, I could not help being duly impressed with. 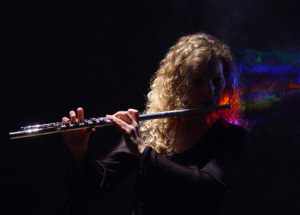 Space does not permit a detailed description of every song, although the richness and diversity mentioned earlier are characteristic of the entire album. However, one of the highlights in the second half is the dreamlike intro and Pamela’s plucked harp strings that evolve into the dramatic theme of “A Choice From The Heart.” I also enjoyed the ethereal quality of “A Divine Encounter” as well as the Enya-like feel of “Destinies” on track 8. One of the most impressive features about the music of 2002 is the skill with which they integrate traditional and electronic instruments. These days it’s easy to emulate just about any sound on a synthesizer or sampler and often times, in a lot of  today’s music, fewer “real” instruments are used. While 2002 does incorporate synths and computers in the recording process both Randy and Pamela are highly accomplished musicians who cover a wide spectrum of traditional instruments, which lends an authenticity to their sound that I greatly respect.

I love the evocative visual quality of this music and hope that some visionary producer is enchanted enough by the magic in this soundtrack and the timeless tale it tells, to want to make it into a movie. In the meantime, there is certainly more than enough to stimulate the imagination in the lavish melodies of “Damaynati.” 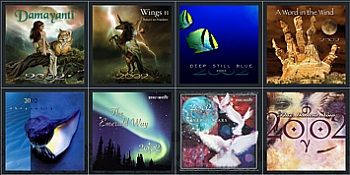