I don’t believe that I have ever begun a feature article with a disclaimer, but I will say at the outset that the scope and magnitude of Shanti Samsara is so expansive, that whatever I can fit within the bounds of this article will just be scratching the surface, and that readers are encouraged to visit the website for the full picture. That said, Shanti Samsara is a masterwork from Ricky Kej of India who won the GRAMMY in the new age category in 2014 with his collaborator, South African flutist Wouter Kellerman for their album, Winds of Samsara, which paid tribute to Ghandi and Martin Luther King. Shanti Samsara, however, is much more than an album. Subtitled “World Music For Environmental Consciousness,” the deluxe version of it which I received contains 2 CD’s enclosed in a 156 page hardcover book that is chock full of information as well as beautiful color photos and artwork. It is quite an impressive package to say the least! But that is just the physical presentation. There is a powerful message, and quite a story about its inception and importance. 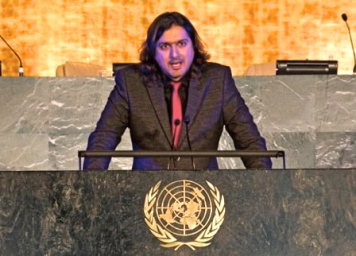 Ricky Kej speaking at the UN

So let’s begin at the beginning. On September 7, 2015, Ricky and his wife Varsha, were invited to the office of the Prime Minister of India, Narendra Modi, who wanted to congratulate Ricky on his GRAMMY win. What was supposed to be a 10-minute courtesy call turned into an hour-long philosophical discussion that ultimately led to the creation of Shanti Samsara. Among the topics the Prime Minister brought up was his concern for the environment and the need to protect it. This resonated deeply with Ricky, a long time conservationist who believes in the power of music and media to stimulate awareness. In his words: “We looked at each other and decided – let’s make an uplifting album that inspires environmental consciousness.” In that moment, the seed for Shanti Samsara was planted which culminated in the album being officially launched at United Nation COP21 climate conference when the Prime Minister of India formally handed the newly completed album to the President of France, Francois Hollande as a gift on stage. Since then, Ricky Kej has personally addressed the General Assembly of the UN, as well as performing music from Shanti Samsara there.

In between the planting of that seed and it’s eventual fruition, an unimaginable amount of international effort went into making this dream a reality. The sheer number of people involved in this project is staggering, as is their diversity. Over 300 musicians from around the world, 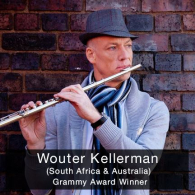 including 20 GRAMMY winners participated. Among them are the aforementioned Wouter Kellerman, Stewart Copeland who played drums with Sting in The Police, Peter Yarrow of Peter, Paul, and Mary, country star Gary Nicholson, R&B singer Patty Austin, and African vocal group Ladysmith Black Mambazo, to name but a very few. There were also a great number of new age and contemporary instrumental artists who I have previously written about as well, such as Darlene Koldenhoven, Ron Korb, Paul Speer, Seay, Vito Gregoli, and so many more. I sincerely wish I could list them all. But in addition to musicians are spoken word contributions and more from international luminaries in the political spectrum and entertainment world like actresses Rosanna Arquette, Francis Fisher, Lindsay Wagner, and Bollywood superstars Amitabh Bachchan, Hariharan, and Shankar, Mahadevan. I must also mention long-time Ricky Kej collaborator Vanil Veigas who played a major role in the engineering and production of the album. 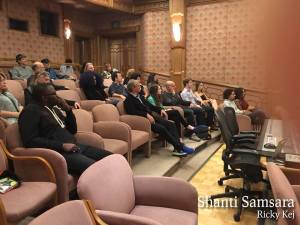 And as they say in TV commercials: “But wait, there’s more…” The theme of Shanti Samsara is also represented by a number of exquisite and professionally produced videos filmed on location at various places around the world. I was fortunate recently to attend a special showing at the state of the art screening room of Dolby Labs in downtown San Francisco, after similar showings were held in New York and Los Angeles. Steve Robertson, who was intimately involved with this project on a number of levels, hosted this event along with Wouter Kellerman, who in addition to speaking played live flute to one of the videos.

While the video showing was just about 20 minutes in length, the impact was extremely impressive, as the visuals powerfully reinforced the messages. One video dealt with the effects of climate change on a global level as well as specifically on the Pacific island nation of Kiribati, which is slowly being submerged by rising sea levels. Other videos dealt with the Kali Forest Reserve in India, the extreme problems facing the elephant population in India and the efforts to save them, the life-giving waters of the Ganga River, the endangered biological diversity of the Western Ghats mountains and also Australia, as well as much more. This consciousness-raising montage illustrated the adage that “a picture is worth a thousand words.” Talks are now under way to take this showing on the road to college audiences. Incidentally, all these videos can be seen on the Shanti Samsara website, and I highly recommend checking them out.

With two full CD’s, dozens of tracks, and over 300 musicians involved, there just isn’t room to go into the music in as much detail as I would like to or usually do in my feature articles. But I must acknowledge Ricky for his herculean accomplishment in the writing of this music and the collaborations he has fostered. To give an idea of the scope of this project, I’ll highlight the first song Ricky composed for this project, “Samsara,” which translates as “the world around us.” Its soaring melodies and skillful blend of World Music and Indian melodies make it the ideal medium to celebrate our relationship with Mother Earth. 80 musicians from the Royal Philharmonic conducted by Christopher Tin and recorded at the legendary Abbey Road Studios in England are featured with a host of musicians and groups from around the world, too numerous to mention on this incredibly powerful and moving composition.

The diversity of music on this album is absolutely mind-blowing. Not surprisingly though, a  number of the songs reflect the musical influence of India. On disc 1, track 2, “Ganga” blends traditional Indian sounds in a symphonic context that is about the importance of water to all life on earth. An interesting merging of elements is heard on a song called “Kudrat” which means “universe.” Beginning with a choral passage based on texts from Saint Francis of Assisi’s, “The Canticle of the Sun,” it flows into Hindu verses that encourage mindfulness about the natural world. Lyrics sung in English are heard in the upbeat “Festival Divine,” which also features Wouter Kellerman on flute. A track called “Compassion” incorporates the Asian sounds of bansuri flute and koto, as well as a brief spoken word invocation by the Prime Minister of Japan. I was particularly fascinated by a track called “Earth Song,” which incorporates sounds of our planet recorded from space by NASA, along with the haunting tones of award winning Canadian flutist Ron Korb. The first disc concludes with a lovely instrumental version of the Indian National Anthem, which brings us back to where the seed for this album was planted and nurtured.

On disc 2, “One Song,” brings together the vocals of Darlene Koldenhoven, who has performed with Yanni, Pink Floyd, and others, with the warm earthy sounds of African reggae singer Rocky Dawuni in a message of world unity backed by a mix of Indian instruments and a lush string orchestra. The words of the iconic Persian poet Rumi are heard on a mystical-sounding track that bears his name as the title. Drawing from a very different tradition is a piece called “Aimsir” which features The San Diego Jewish Men’s Choir conducted by Ruth Weber singing in Hebrew. Hindustani Classical vocals add to the exotic mixture of this track as well. American vocalist Patti Austin, whose extraordinary career has included singing with Michael Jackson, brings her soulful sound to a track called “Love Divine,” that also feature the choral vocals of new age recording artist Seay.

While much of the music on the album is lively and upbeat, a more melancholy ambiance is heard in “The Voice Of Kiribati,” the aforementioned Pacific island nation that is on the front 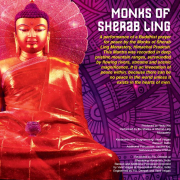 lines of climate change. On what Ricky Kej calls “one of the purest tracks on the album,” “Monks of Sherab Ling” was recorded by him in the North Indian city of Dharmasala where the Dalai Lama lives in exile. Their extremely deep voices and rich overtones produce a profound effect on the listener. The album draws to a close on “Where Are My Rainbows” with the voice of one of the early American folk singers to use their music to rally people against social injustice – Peter Yarrow, best known as one third of the legendary Peter, Paul, and Mary.

I must reiterate what I started off by saying that what is written here barely scratches the surface of the breadth and depth of this incredible project. At the Shanti Samsara website, the entire contents of the 156 page book can be seen, as well as an opportunity to hear the music, view the videos, and more. But beyond what can be seen and heard there is the intention behind it, and the fierce urgency of its message. Here, Ricky Kej shares his personal perspective:

“A global heralding of conscious action: that is what Shanti Samsara is. The environment is a 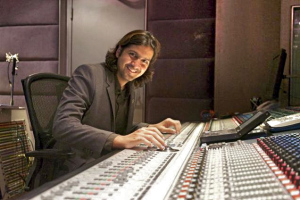 natural extension of the self. One cannot exist without the other. A drastic change in our ways is the need of the hour; a realignment with a collective goal that is bigger than ourselves. We must rekindle our inherent connection with Mother Earth by accepting responsibility for our actions. Every individual is connected by an intricate web of consciousness which transcends space and time. Each individual life plays a crucial role in maintaining the balance that serves all equally. Let us heed our mother’s call and consciously work together for a future that is bright and beautiful for everyone, especially the children.”

Shanti Samsara is a multi-media magnum opus from GRAMMY winning producer/recording artist Ricky Kej. The project expands beyond the role of music as entertainment to deliver a clarion call for awakening about the environmental issues that affect every living thing on earth. In today’s deeply divided world, this is something that all people, regardless of race, religion, or political beliefs can come together on and unite around. And, as Shanti Samsara brings to light, it is not only a good idea… it is imperative!