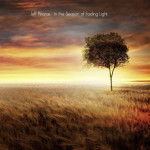 Looking out my window at the sun slowly slipping below the horizon of the San Francisco Bay this mid-November evening, the music and the title of Jeff Pearce’s latest CD, In the Season of Fading Light, create a most appropriate soundtrack. As on the cover of his album, clouds tainted in muted yet luminous hues are breathtaking in their beauty, while they subtly signal the coming darkness of winter in this transitional time of year. And speaking of transitions, there is a major one to be found on this, the tenth album in Jeff’s extensive career as a recording artist. I have been a big fan of his music over the years and am certainly among the many who regard him as one of the premier ambient guitarists in the new age music genre. His sonic explorations on electric guitar with special effects and looping, as well as an esoteric 10-string instrument called the Chapman Stick have expanded the spectrum of guitar-based music with a textural ambience that is often mistaken for synthesizers. So the aforementioned transition to this primarily piano-based CD, came as a surprise, and marks another chapter for this innovative instrumentalist.

Before delving into his new music, and the interesting project it evolved from, I’d like to share briefly about Jeff’s journey to this point in time. He started playing guitar in 1980 at the age of 13 and continued on into his college years when his world became expanded by a number of unlikely influences. While many young guitarists of that era were drawing inspiration from the likes of Led Zepplin and Van Halen, Jeff’s musical perspective was broadened by his discovery of medieval polyphonic composer Hildegard von Bingen. Although I can’t think of many (or any) electric guitarists who cite her influence, Jeff was inspired to explore this path less travelled in his music. Another revelation for him while in college was the landmark ambient music of Brian Eno, and in particular, his seminal Music For Airports. In 1993, Jeff released his first album and he has been a prolific recording artist ever since. His music has received critical acclaim, success on the charts, and extensive airplay on syndicated radio programs like “Hearts of Space,” and “Echoes.” In addition, his music has been used in high profile projects by The NBC Summer Olympics, Muzak, and Mercedes Benz, as well as in film and video soundtracks.

This abbreviated retrospective brings us to the present moment and Jeff’s latest release, In the Season of Fading Light, and the project behind it. The music on this album is from his “Provision Series,” in which he created a new musical track each month for a year and made them available by digital download with a percentage of the profits going to different charities. Among them were: the Juvenile Diabetes Research Foundation. American Heart Association, American Childhood Cancer Organization, Special Olympics, Goodwill Industries International, the Search Dog Foundation, St. Jude Children’s Hospital, and the Red Cross. This new album contains all of the tracks from the series, with $1 from each CD sale going to Feeding America, a charitable organization, which services food banks around the country. Jeff is certainly to be commended for his efforts, both musical and humanitarian. 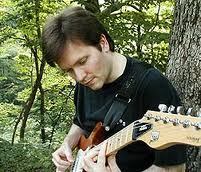 As mentioned, Jeff Pearce is best known for his impressionistic ambient guitarscapes, so the release of this decidedly piano-centric album was an unexpected event for people familiar with his previous music. Traces of his guitar electronics are found on some of the songs, such as the title track, which opens the album. Ethereal sustained guitar softly shadows the chord changes on this atmospheric and melancholy composition. A similar air pervades “A Secret Of The Moon,” where the guitar takes on the semblance of a string section, gently supporting the wistful piano melody. Other songs, such as “Where All Rivers Begin,” “Harvest Prayer,” “Newfallen,” and a number of others are all piano solos, and evoke memories of some of the classic Windham Hill pianists. This is not surprising, however, given that Jeff has been studying with one of the best of them – Philip Aaberg.

I was intrigued while listening to a tune called “After The Frost,” when, about two thirds of the way into the song, the piano was joined by a cello-like tone, which sounded to my ear like an electric guitar being played with an Ebow – an electronic device which sustains the string producing a bowed effect. Another interesting use of sustained guitar is found on Winter Waltz where extended notes are gently pitch bent, trailing off ghost-like into the distance. Perhaps my favorite song on the album was “Words From The Rain,” a dreamy drifting piano soundscape with clouds of guitar ambience and the sound of rain providing imagery for the minds eye. While I have been pointing out some of the guitar accompaniment, the piano is clearly Jeff’s primary voice on this recording. The guitar work in this context is tasteful, yet understated. As much as I have always appreciated Jeff’s exquisite ambient guitar playing, and look forward to hearing more of it in the future, I acknowledge him for stepping out to explore other avenues of instrumental expression. 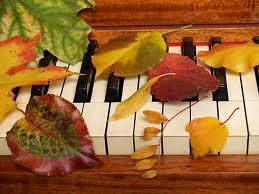 was impressed with how well the music evoked the feeling of the title: In the Season of Fading Light. Other than a few songs toward the end, such as The Road and the Wind,” and “Into Spring,” which as the titles would imply, express more lightness and motion, the album’s aura could be described as reflective, haunting, and ruminative, portraying in sound the spirit of approaching winter. The audio quality of the CD is excellent, and sparkles from the expert polishing in the mastering stage by Grammy winning producer Corin Nelsen. The album closes with the appropriately named “Where All Rivers End.” This was another of my favorites and featured a subtle sonic tapestry of guitar gracing a meditative piano journey.

In speaking about the inspiration for his artistic endeavors, Jeff shares: “There are many different things that can inspire music: nature, memories, paintings, etc…. and I’ve been inspired by all these things at one time or another. Usually, the music flows best when I’m in a state of peace in my life.” There is a sense of peacefulness that comes through in this atmospheric music and I have no doubt that listeners will find just the right moments where it would make their own perfect soundtrack.

Jeff Pearce will be making a rare west coast appearance at AMBICON in May of 2013. Sponsored by Hearts of Space, this is the premier event for fans of ambient music.