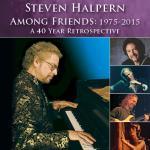 Like many reading this, I’ve been a fan of Steven Halpern’s music for over 30 years.  His groundbreaking meditative and healing albums, including SPECTRUM SUITE, CHAKRA SUITE, and ANCIENT ECHOES, earned him a well-deserved reputation as a founding father of New Age music. As I wrote in my review of his PARADIGM SHIFT album: “If anyone has ever helped to create and define a musical genre it is Steven Halpern.” In my three decades as a professional new age music reviewer I have had the opportunity to review many of his recordings, and recently had the pleasure to collaborate musically with Steven on the award-nominated album AMBIENT ALCHEMY.

One thing I always like about checking out his latest album is that I never know exactly what to expect. While Steven has developed a “signature sound” that many know him by, others would be very surprised by the diversity of styles and influences found in his vast catalog of approximately 80 releases. Anyone who listens to the retrospective, AMONG FRIENDS, is sure to find some delightfully unexpected moments that will expand your perception of the Halpern sound.

One of the distinguishing features of Steven’s music is the way non-linear time, space, and silence, are integral parts of the 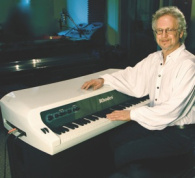 music. As a listener, this kind of music makes it easier to get into the timeless present moment. Part of what makes his music unique is not just his use of space and silence, but the actual tone of his main keyboards, the Fender Rhodes electric piano and Yamaha Concert Grand Piano. I can usually tell it’s him, instantly, when his music comes on cable or satellite radio that I’m listening to in the background.

All of Steven’s numerous releases were produced by him and released on his own indie label.  Many of the jazzier and world/fusion albums however, never received the attention that they deserve when they were first released, for a variety of reasons. AMONG FRIENDS rectifies that oversight, ‘setting the record straight’ as the old saying goes. The album highlights Steven’s collaborations with other artists, including Paul Horn, Michael Manring, Paul McCandless, Jai Uttal, and many more.

The songs are like a multi-colored string of beads, each with its own distinct hues and patterns reflecting luminous moments in time. Particular standouts are the opening tracks.  Paul McCandless plays the sweetest oboe, soaring over a luxurious string ensemble and airy Rhodes electric piano.  It is totally appropriate that this song opened Steven’s DEEP ALPHA, which garnered his first GRAMMY nomination.

With “Shared Secrets,” I felt as if I were hiding in a corner as Steven and 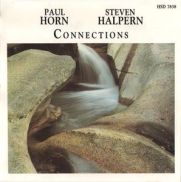 Paul Horn recorded their intimate duet.  Paul creates a memorable melody over an unusual 3-chord progression that Steven suggested 30 seconds before they began playing.  Musicians will appreciate how Paul shows off the chord changes (F minor, D flat, B flat), the true sign of the master musician that he was.

Going back into the meditative/brainwave entrainment zone, DEEP THETA 2.0 features Argentinean master musician Jorge Alfano, who takes the shakuhachi bamboo flute to places it’s never been in its 800-year history. ” Deja-Blues” combines a hypnotic Middle Eastern rhythm with a blues-inspired wordless vocal by Melissa Phillppe, and bamboo flute by Schawkie Roth. “Mirage” features the exotic sounds of duduk, also played by Alfano, over a percolating groove played on dumbek. The album closes with the sensuous “Deep Peace,” featuring Paul McCandless, and Marc van Wageningen anchoring the song on bass. 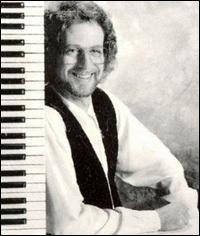 In the beginning – Steven Halpern in the 70’s

While Steven is best known for his ethereal ambience, this retrospective also illuminates some of his more earthy and sensual sounds.  I’m sure that many of Steven’s fans and listeners are not aware of his earlier incarnation as a jazz/rock trumpet and guitar player. After hearing his fiery trumpet and guitar chops on “In Another Life”, I was aware that his signature keyboard stylings combine both ambient, textural aural architecture and thinking like a horn player. He’s not just the keyboard accompanist; his voice is equal to the flute or sax in the mix for a reason.

This 40-year retrospective, AMONG FRIENDS: 1975-2015, offers the most complete appreciation of the many facets of Steven’s musical vision. It’s like an audio “Back to the Future” trip through time and space. With a musical legacy as rich as Steven Halpern’s its nice to have a cross sampling of it in this time capsule of treasured collaborations. AMONG FRIENDS makes a wonderful introduction to Steven’s music, or for long time fans, a compilation of some of his historic recordings. I greatly enjoyed hearing the spectrum of creative chemistry that was conjured up over the years, and believe that listeners will find it equally inspiring.