The album being featured here, “A New Horizon,” is a re-released special edition with two bonus tracks by Spanish-born recording artist Jose Luis Serrano Esteban. Originally released in 2009, and titled “Un Nuevo Horizonte” in his native language, it is a follow up to his debut release, “Dreamland.” For many musicians, making an album is an exercise in the creative process and they are happy to leave the technical aspects to engineers and producers. However, for Jose Luis, the studio production work is an integral part of the overall project that he is well qualified to play a major role in, as his background includes extensive training and experience in both music and sound engineering.

Starting out on keyboard at the age of 12, his influences were the decidedly sophisticated recordings of artists like Jean-Michel Jarre, The Alan Parsons Project, and Mike Oldfield – quite heady material for one so young. He soon developed a passion for the guitar and began formal music studies. However, in time, the lure of emerging technology caught his interest and in 1993 he began to study Telecommunications Engineering at a university in Madrid, where he eventually graduated in 1997. He further expanded his studies into the field of computers and music as well. Some of his early jobs in the music industry included working on PA systems at concerts, installing broadcast facilities at radio stations, and even serving as a sound technician for the Olympics. In the years that followed, his education continued with learning about composing soundtracks for film and TV. These various aspects of his musical persona have led him to view the actual process in the studio with as much importance as the musical compositions being recorded, and it provides him with the opportunity to further sculpt his sound. Jose Luis not only employs his talents on his own recordings, but has collaborated on a number of musical and visual productions with other artists as well. “A New Horizon” is a masterfully crafted blend of new age, classical, rock, electronic, and world music, which was influenced in his early years by recordings he heard on the Windham Hill and Narada labels. Having expanded his instrumental palate to include Spanish classical guitar and a variety of acoustic and electric guitars, bass, piano, synthesizer, and percussion, he is also joined by a host of talented musicians including Nacho Serrano (bass and 12string acoustic guitar), Nuria Felix (violin), Santiago Puente (clarinet), Gloria Esteban (flute) and Covadonga Serrano (piano).

A soft lilting melody on nylon string classical guitar over a background of subtle synthesizer and acoustic guitar sets the stage for what promises to be an inspired instrumental excursion over the next 16 tracks. “Coming To Life” is a feel-good tune that oozes optimism and introduces percussion and Jose Luis’ soulful electric guitar playing to the mix. A lively upbeat air and Spanish influence pervades his “Colors Of The Countryside” composition, highlighted by some tasteful violin playing and Flamenco-style handclaps. Like a fine wine, the album seems to increase in richness and complexity as it evolves. Track four, “Planet Earth” is a multi-layered mélange of arpeggiated bell sounds, piano, synthesizers, guitars, drums, and more that evokes an expansiveness befitting of its title.

The flow of the album has an organic feel, almost like breathing, where more outgoing songs are often followed by a song or two with an introspective nature. Such is the case on the next two tracks: “The Start Of A New Day” and The Inner Light” which are more reflective of an in-breath. An interesting juxtaposition exists between “Cosmos” with its richly orchestrated soundscape reminiscent of Narada artists like David Arkenstone, and the next track, “Moon” which featured a spacious haunting melody on solo classical guitar. A couple of my favorite tunes were the appropriately exuberant “Spring Has Arrived” and a mid tempo guitar driven piece called “Further Than The Milky Way” which had the feel of an instrumental power ballad by the rock group Journey, and is featured as a music video on his website.  I could also hear a bit of the Mike Oldfield inspiration in Jose Luis’ music as well. As may be surmised by the previous descriptions, there are a multitude of influences at play on “A New Horizon,” yet like sangria, they are tastefully blended and provide a festive and refreshing listening experience, brimming with originality and creative energy. 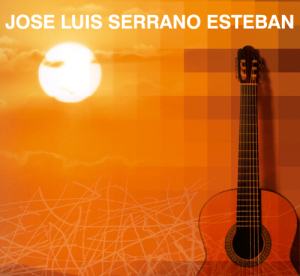