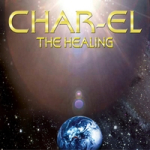 I must say that I have been a long-time fan of the otherworldly music of Ohio-based synthesist and keyboardist/composer Charles Thaxton who records under the name of Char-El.  So the news of his latest release, The Healing, was not only music to my ears, but to my mind and body as well, which I’ll talk about in a minute. Charles is a veteran electronic music producer with deep roots as a live performer in the progressive rock genre. He played in a number of bands with appropriately prog-rock names such as Stargate, Galileo, and Voyager, which was a Tangerine Dream-influenced trio doing original music in planetariums and at outdoor events. Inspired early on by groups like The Moody Blues, Genesis, Yes, and others, he eventually became enamored with the instrumental music of new age artists such as Kitaro and David Arkenstone. Charles’ earlier albums like Worlds Without End and Heaven and Earth, which received critical acclaim and extensive radio airplay, reflected his love of both of these genres, combining electronic atmospheres and sci-fi sonics with more earthy rock elements. For me, as a classic rock guitarist evolving into a synthesizer soundscape creator, his music was a magical blend that spoke to both polarities of my creative spectrum.

The Healing, however, is more than a bit of a departure, although a welcome one. The mood is so mellow and 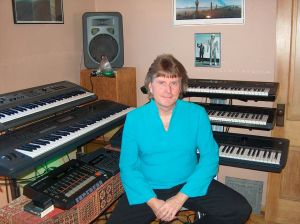 enchanting that I don’t miss the drums and soaring guitars one bit, as much as I enjoyed them before. As the liner notes describe: “The music consists of peaceful and melodic looping sequences and incorporates nature sounds on several cuts, and is designed to support massage, Reiki healing work, meditation, or any kind of self-help therapies. The album features Ohio musicians Desra Dabney on classical and wood flutes, Denise Grupp-Verbon on harp, and Gerald Natal on nylon and steel-string acoustic guitars, accompanying Char-El’s atmospheric keyboards.” This is music with a mission as can be seen in the album’s title and song names such as “Healing Heart,” “Heal The Land,” and “Healing Prayer.” As such, this album could not have arrived at a more opportune time for me personally.

Shortly after receiving the CD in the mail, and before I had a chance to listen to it, I had a medical emergency and spent five days in the hospital before I was sent home to recuperate from major surgery. When Charles heard about this, he emailed me and suggested that I listen to the album while I was recovering. This sounded like a good idea, and one that I took him up on. For the next week or so, I listened to the album over and over with headphones, even waking up in the middle of the night in pain and putting it on. I can’t say how grateful I was to have this incredibly soothing music at this difficult time. It was just what the doctor ordered. Since that time, I’ve listened to it again and find it just as beautiful and relaxing as I did before. This album is a must-have for anyone’s musical medicine cabinet and the perfect solution after a stressful day or as an accompaniment to any kind of healing work, yoga, meditation, etc.

While the CD is listed as having 7 tracks, each with its own title, in actuality, it plays as one continuous musical flow. At the track markers, the CD player shows it as progressing to the next track, although there is no break in the music. This makes it especially good for the kinds of activities described above. Opening with “Healing Heart,” we are ushered into this peaceful world with the sound of a soft wind blowing, tinkling chimes and the beat of a human heart setting the stage for the piano, airy flute, acoustic guitar, and lush synthesizer orchestration that follow. There was something in the chord progression and feel of the piece that touched me in a profound way, similar to when I listen to “Pachelbel’s Canon.” It is divinely comforting and, to me, evokes the feeling of returning home to the arms of a loved one after being away for a long time. As track 1 flows into track 2, the sound of a babbling brook marks the transition and a subtle shift into another musical dimension is under way. As the piece unfolded, I had a brief flashback to one of the quintessential and most popular new age albums of the mid 90’s, The Fairy Ring by Mike Rowland. Although other elements such as heavenly harp glissandos and gentle guitar added a distinct flavor to this gorgeous piece entitled, “Heal The Land.” 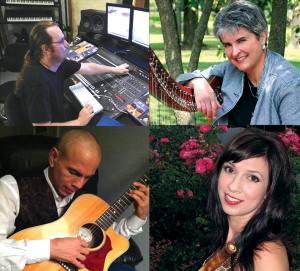 collaborators on The Healing

Charles’ piano and synth work is beautiful as always, although it was interesting to hear it in this understated context and playing a role of supporting the overall vibe of the music rather than being more out front and in the spotlight as the main focus. And speaking of supporting roles, I don’t know that I’ve ever heard as much accompaniment on a Char-El recording as on The Healing. The flute, harp, and acoustic guitar all blend harmoniously to create a holistic musical experience that is greater than the sum of its parts. The nature sounds found on some tracks also add a distinctive ambience. I particularly liked the whale vocalizations on “Heal The Seas,” as they blended with Charles’ ethereal synthesizer textures. The sounds of birds and crickets evoked more earthy and airy elements as a background for keyboards and harp to glide over on a track called “Heal The Skies.” The album concludes with “Healing Prayer,” and on this blend of new age and neo-classical influences I was particularly aware of Charles talent for composing and arranging. Little touches like knowing exactly the right moment to orchestrate the swell of a string section for dramatic effect only reinforced my appreciation of Charles’ musical sensibilities.

As mentioned, this release is a bit more understated than the previous Char-El albums, but intentionally so. It is also a more collaborative effort, with Charles and his accompanists going to great lengths to create a soundtrack for the healing of body, mind, and spirit. From my personal experience, I can say they have certainly achieved that goal. I especially like the way it flows from one track to the next without interruption, allowing the listener to drift on the music’s mellifluous momentum. The Healing enfolds you like an angelic embrace, and is an album that will have an honored place in my permanent music collection.