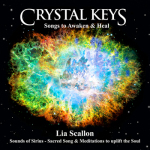 In retrospect, after the release of “Crystal Keys,” her ninth album of sacred music, it must seem like another lifetime in which former actress Lia Scallon shared the stage with the likes of Cate Blanchett, Glenn Close, and Liam Neeson. However, a higher calling has led her on another path, devoting her life to spiritual pursuits and awakening consciousness. Born in Ireland and graduating from Trinity College Dublin, Lia has been living in Australia where she has achieved great success and recognition that is now becoming worldwide. Having once written a review in Awareness Magazine about one of Lia’s earlier Sounds of Sirius releases, I was familiar with her unique talents and looking forward to experiencing the evolution of her music.

The album’s subtitle – “Songs To Awaken & Heal” goes a long way in describing the intent of its creator. In her words: “Music is a Universal Language that transcends all language barriers. It can bring body, mind, and spirit into harmony and balance. Sacred music and chants, for example, have been known to charge and harmonize us, on all levels. From the Pythagoreans and Plato through to the Renaissance, music was used to heal the body and to elevate the soul. Both artists and scientists believed earthly music to be but a faint echo of the heavenly Harmony of the Spheres.” Hence, this concept is not without historical precedent and is being embraced by a new generation of musicians and healers at a time of great awakening on our planet.

The soul-stirring sound of Lia’s crystal clear voice at times evokes the ethereal ambience of fellow Irish-born recording artist Enya, although with it’s own distinctive quality and sense of purpose. One will notice right away that the chants and lyrics are not in English, nor are they in any other language they might be familiar with. Lia describes her inspired vocalizations as a “Language Of Light.” She goes on to say: “the soul seems to recognize what is being said and is stirred into remembrance of its true origins. As the listener responds intuitively to the melodies and words, they find themselves enfolded in a cocoon of peace and relaxation.” It’s easy to close your eyes and imagine yourself in the healing temples of ancient Egypt.

It took me a moment or two to adjust to not recognizing or understanding the meaning of the words on a conscious level – the mind likes to make sense of everything. However, after surrendering to the unfamiliarity, I began to let go and experience their rhythm and vibrations on a deeper level. It was not long till I felt an appreciation that I didn’t have to conceptually process their meaning and could just feel the flow and the loving intention behind the sounds. Supporting Lia’s vocals are a number of talented musicians with extensive and impressive music industry credentials that collectively include touring or recording with Yanni, Tina Turner, Annie Lennox, Joni Mitchell, British folk-rock group Steeleye Span, and more. Although used subtly and sparingly, instrumentation features keyboards, flute, didgeridoo, Tibetan and crystal bowls, gongs, chimes, and a variety of percussion.

The theme, as implied by the title “Crystal Keys,” delves into the gifts and the energies of the mineral kingdom. The album is divided into ten tracks, each of which focuses on a different crystal or mineral such as sapphire, amethyst, clear quartz, emerald, ruby, etc. Accompanying the CD is a beautiful full color booklet that gives affirmations and describes the inherent quality of each stone. I enjoyed reading the words as I listened to the music to reinforce its healing effect. Having first heard it on stereo speakers and then on headphones, I found that the experience was definitely enhanced through headphones where the vibrations of Lia’s sacred harmonics seemed to resonate more and penetrate to deeper levels of Being.

Just as there is great variety in the color, shape and properties of each stone, so is there a spectrum of sounds that go with each one. From the powerful, grounded, earth and fire energy of Ruby to the warm meditative glow of Citrine, as well as the more lyrical, Native American-like rhythmic chant of Sapphire, and my favorite, Amethyst, with it’s longer dreamy sounds and harmonic overtones, each song, like the stone it represents, reflects diverse facets.

Samples of the CD can be heard on Lia’s website, along with some beautiful video creations. As mentioned earlier, there is a sense of purpose to this music. It is not created for “entertainment” as much as it is intended as a tool for inner attunement and uplifting the spirit. If this is the kind of experience that appeals to you, Crystal Keys may just unlock the doors of perception and provide a glimpse beyond. 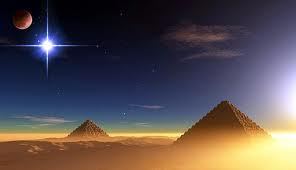