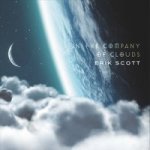 On his stellar new release,  In the Company of Clouds, bassist/composer Erik Scott follows in the lofty footsteps of his critically acclaimed and chart-topping album Spirits, which I had the pleasure of writing about. With its blend of Erik’s signature melodic fretless bass along with steel guitar, synthesizers, guitar, percussion, and a bit of choir-like gospel vocals, the music creates an ambiance that is both earthy and ethereal. The alchemy of these elements is quite unique and takes the listener to uncharted sonic terrain. It’s not easy to forge a unique sound in today’s crowded music world, but Erik manages to produce distinctive music that absolutely sounds like no one else.

In my writing, I like to provide personal perspectives by and about the artist, their inspirations, creative process, and more. My recent interview with Erik Scott revealed powerful life-changing events that had a direct influence on this album as well as on Erik’s very existence. Sharing a bit 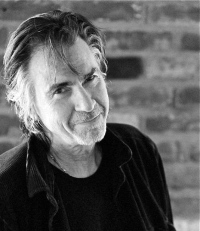 of this will hopefully add additional insight into this remarkable artist and perhaps inspire others in dealing with the unexpected circumstances that life sometimes puts in front of us.

Shortly after the release of his previous album, Spirits, Erik received the dreaded news of a cancer diagnosis. Here, he shares about the profound effect that had on his life and his music. In his words: “Priorities are re-ordered, or at least analyzed as you come to grips with the fact that as it turns out, you’re really NOT immortal after all. Luckily, with help, I fought that batch of bad guys off, and I now make efforts to encourage others to know that cancer is not the death sentence it once was. It is an instrumental record…there are no words to tell the listener how he or she is supposed to feel, so it all comes down to conveying a mood with the music, and I hope that I was able to give the music a feel that resonates. 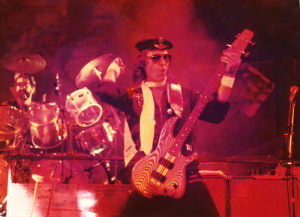 Its’ been a long and winding road to get to this point for Erik – not only in terms of this recent ordeal, but in regard to his music career over the past 40 years. For those who may not be familiar, Erik was deeply embedded in the mainstream music world as the bassist for rock star Alice Cooper, as well as over the years, playing with Carl Palmer of Emerson, Lake, & Palmer,  Flo and Eddie of the pop group The Turtles, and the experimental R&B/rock band Sonia Dada in addition to doing session work with Kim Carnes, Pops and Mavis Staples, and others. Eventually though, Erik’s creative direction began to shift, and as he shares: When you play more traditional bass in an ensemble setting, as I did for forty years…usually the melodic chores are taken by other instruments… and since I have so many melodic ideas, I just decided to see if I could carry the ball in the upper registers of the bass, and use the effects normally reserved for those other instruments, IE: echo, delay, wah, etc. Initially, my music was reviewed as having “interesting and unusual guitar sounds”, when in fact it was all bass in the upper registers.” Hence, what I referred to earlier as his unique and distinctive sound.

So let’s delve into that sound and focus on In the Company of Clouds. According to Erik: “I

intended that a warm groove should permeate this record, and part of the instrumentation I used to convey this vibe is human voices, used as instruments, rather than to present any lyrics. I have always responded to the waves of simple chords from a gospel choir.” The opening track, “Nine Lives,” is one of two songs on the album that incorporate these sounds. While there are no lyrics on the album, I couldn’t help but notice the surprisingly vocal quality of Erik’s fretless bass playing on this song that almost seemed to be singing words. As Erik shared in our interview: “In writing the melodies for ‘Nine LIves” I found myself dueting a bit between vocal bits and fretless melody, almost a call-response. So I harmonized the vocal parts, and then got Larry, Sandy and Bryan to sing them, and they sang like angels.” In a context of ethereal synthesizers, percussion, and the always-tasteful steel guitar playing of John Pirruccello, who plays on every track, the effect is extremely uplifting and makes for a perfect introduction to the album.

The other song that features gospel-like vocals is track 3, “Women Of Avalon.” There is a wonderful cinematic quality to this piece that draws deep inspiration from mythology. As Erik describes: “Brought together by seemingly mortal wounds to King Arthur, Guinevere, Morgana, Viviane… sorceress, priestess, healers, and defenders of the faith, brought Arthur thru the mists to the mystical Isle of Avalon, and to the Lady of the Lake. Were they secreting him to his final resting place? Or taking him to be healed thru secret ceremonies of skill and sorcery?” This track is truly epic and embodies the mist and magic of this ancient saga.

A song I was looking forward to hearing is “Breathing Room,” as it features a guest appearance by my favorite ambient guitarist, Jeff Pearce, whose own music I’ve written about on a number of occasions. Here he delivers his signature dreamy sound over a background of celestial synthesizers, steel guitar, percussion, and of course, Erik’s mellifluous and melodic fretless bass – a stunning combination. With regard to the unique way Erik uses his bass, he shared: “Often, and especially on this record, I try to express melodies in effectively minimal statements, using the nuance of performance to express emotion. I try to use more space as a sonic environment that will free these more simple statements to speak volumes.”

Another beautifully uplifting track is “Victory,” which Erik describes as: “…generating a feel of triumph and thoughtful celebration, maybe reflecting how I felt when they said the cancer had disappeared. Triumph, but not a wild party-like celebration, because it’s a quieter, thoughtful, thankful mood involved in cancer recovery, as you might guess.” As I was listening to this album, every once in a while I would hear a melody or a phrase that reminded me slightly of something, perhaps in the distant past. One of those moments was on a track called “First Cup,” that brought to mind the psychedelic rock classic “It’s All Too Much” by the Beatles. Not to say that it sounds just like it at all, but perhaps there was something in the way it moved me (wink). The album draws to a serene conclusion with a dreamy piece called, “The Long View,” which quite appropriately, leaves the listener with their head in the clouds.

If I had to sum up my reaction to this album in one word, it would be “wow!” As a music

journalist, I listen to hundreds of albums a year, and I love when a recording crosses my path that is so distinctive, hearing it for the first time feels like stepping foot on an undiscovered land. As well as being a highly accomplished instrumentalist, Erik Scott has a fertile imagination and the musical vision to create compositions and arrangements of unlikely elements in ways that can’t help but make you sit up and take notice of their originality. While in addition to bass, Erik who also contributes keyboards, drum and percussion programming, a bit of vocals, and mandolin, has brought in a superb supporting cast of accompanists to bring his vision to life. I must also mention the exquisite sound quality of the recording, which is not surprising given that it was mastered by Tom Eatonwho is well known for his work with Will Ackerman at Imaginary Road Studios.

In conclusion, I’d like to share Erik’s own words in reply to my question about his musical goals: “I hope to make music that not only entertains, but matters a little. If I can make music that somehow helps people simply survive the ordeals that life can throw at you, I think that would be worth it. That might matter. That is after all one of the qualities of New Age music, isn’t it? Helping, healing, smoothing the edges?”