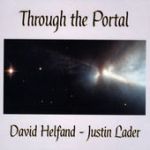 Some music is created from a deeply personal perspective while other music is quite universal. However, the new album by David Helfand and Justin Lader encompasses both. The title, Through the Portal, refers to that threshold that we all must pass through at the end of our earthly existence. Although for David, the inspiration to create this music came from the profound emotional experience of his own mother’s passing. In his words: “As an artist is driven at times to document in some way their direct experiences in life, many of the pieces on Through the Portal and the album as a whole is an impressionistic reflection of my journey and the emotional landscapes I traversed while losing a loved one in my family.”

While much of the inspiration for the music grew from the seeds of David’s experience, he acknowledges Justin’s role as well: “As Justin has been co-composing music with me for the last few years, he has become the voice and the other half of the music through his impeccable, heartfelt viola performances. He journeyed with me on this emotionally driven voyage with great heart and shared in the dreaming of this music.” In addition to playing viola and co-writing the music, including one of the album tracks on his own, Justin also contributed keyboards and percussion. Instrumentally, David plays Celtic Harp, guitar, Mellotron, keyboards, and percussion. For those who may not be familiar with the name Mellotron, it is an electronic keyboard originating in the early 1960’s that was favored by progressive rock groups such as Genesis, King Crimson, The Moody Blues, and perhaps most famously remembered on The Beatles iconic “Strawberry Fields.” David and Justin are also joined on various tracks by Elizabeth Gergel on cello, Mark Hurwit on percussion, and Anthony Proveaux on bass, who also engineered the album at Pro Arts Studio.

In my interview with David, he shared about the evolution of this album: “Various pieces 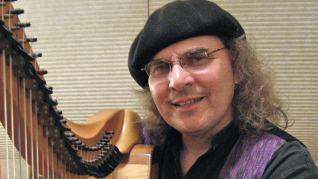 on Through the Portal emerged as if they came right out of the ether’s and were inspired from a feeling I was having the summer before the passing of my mother.  As I knew she was in treatment and doing reasonably well, I started to feel this feeling of hollowness as if wind was blowing through the windswept valleys of my heart and my usual inner feelings of well being were slipping towards the edge of an abyss. Many of the pieces were composed and recorded during that summer and worked on for the next two years after my mother’s passing. In total, the album took three years to complete as it took time for the musical journey to completely unfold.” 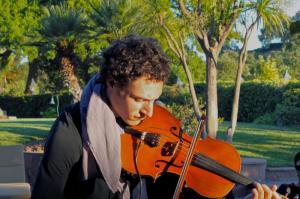 To this, Justin adds: “While the album has a strong connection and narrative aligned with the passing of David’s mother, the album stands independently as a concept album, as follows: The concept album is an exploration that space is a medium separating conscious souls from passed souls. The awe, complexity, and depth of outer space is the perfect fit for the album. While David and I have played a lot of music in the folk and world traditions genres, I was excited when David first proposed the idea of a space music album. I don’t think David knew that I deeply appreciated the genre and had grown up cherishing Stephen Hill’s radio program, “Hearts of Space.” Coming from my classical background, space music is frequently not taken too seriously in the academy, but I find deep merit and appreciation in the reflective, textural, and often-impressionistic qualities.”

So lets explore these spacious realms and delve into a sampling of he album’s 10 tracks. According to David: “Through the Portal,” the first composition on the album was the first piece to emerge, and came out of that feeling of an almost desperate sense of awe and loss before loss even set it’s place before me.” David’s celestial synthesizer choir creates an otherworldly ambiance that is beautifully balanced by the warm woody tones of Justin’s viola and Elizabeth’s cello adding a more earthy quality to the ethereal atmosphere. This is followed by “At the Beginning,” which introduces the sound of David’s Celtic Harp. The piece has a lovely evolution, starting out quietly and building into a well-defined mellow groove, propelled by bass and percussion over a background of keyboards and strings.

While the inspiration for most of the songs flows directly from the theme of the album as mentioned above, a track entitled “Homage,” is, as implied, a tribute… in this case to the music of Kitaro, and more. As David describes: “Homage” was a piece I wrote years ago, inspired by my first time seeing Kitaro and deeply inspired by the feelings I had with his music. I felt that the majesty of the piece reflected the majesty of the deeply mysterious universe and paid homage to the mystery and the vast unknowns of space.” Justin also cites a deep appreciation for Kitaro’s music as well. This song also follows an evolutionary arc, from very dreamy to more rhythmic, and back to dreamland again.

An interesting addition is a track called “Orbit,” which was entirely written and performed by 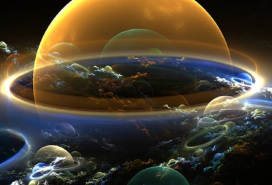 Justin as a solo piece on synthesizers and viola. It features an interesting blend of elements often found in this genre, including drifting electronic textures, gently percolating sequencers, and deep rez bass, in addition to his haunting viola melodies. While much of the music on the album was written by the duo, according to David: “Justin composed and recorded ” Orbit ” while I was in New York with my mother as she was passing and beautifully reflected the inner emotional landscapes of time, place and middle space from three thousand miles away.”

mother’s passing where I dreamt that she called me and said that ‘it has been quite a trip.’  As I was searching for inspiration for a piece I felt the album was missing, it felt like she sent me a gift from the heavens.” After the intensity of this track, it was nice to have the meditative atmosphere of “Endless Skies” provide a bit of sonic sorbet to mellow out to.

The album ends, most appropriately, with “Searching for You.” I use the word “appropriately,” since David describes the song as: “an ode to re-connection with loved ones, closes the album and was possibly the last earthly music that my mother heard as she took her last peaceful breaths, as it was played quietly for her during her final moments of life. As I was there during her passing, the piece faded out into the sunset as she took her last breath, as the angels carried her through the portal. I was humbled and deeply honored and moved that this is what she possibly heard during her final moments.” This song is absolutely gorgeous, deeply moving, and perhaps my favorite on the album. It is a stunning way to conclude the album and so perfectly in keeping with the album’s theme.

David and Justin certainly make for an interesting musical collaboration. Coming from different musical backgrounds and generations, this Oregon-based duo has covered quite a diversity of musical genres over the course of their 3 albums together. While Through the Portal is their venture into the space music genre, their previous music also includes Middle Eastern, Celtic, and Indian styles. Both musicians are quite accomplished in their own way, with Justin having 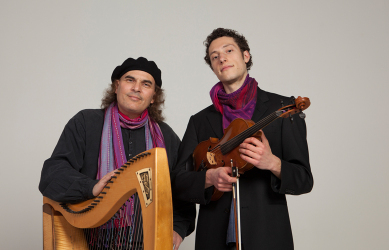 extensive formal education in classical music, and David honing his skills over the years playing in bands and absorbing the influences of British progressive 70’s rock, ambient space music, and a variety of World music traditions.

I will say that over the course of the album one of my favorite elements was David’s Celtic Harp playing, and the way he integrated it into a variety of musical contexts, from ambient and dreamy to more rhythmic sections. I was also greatly impressed with the degree of feeling, expression, and deep soulfulness that Justin evoked in his viola playing, which I found quite moving. And of course, all the other instruments they played so beautifully, added greatly to the compositions. Through the Portal is definitely one of those albums that takes you on a journey through diverse sonic spaces and landscapes of emotion.