Seamless is the perfect title for the eleventh release by solo pianist Christine Brown. In one of the coolest and most unique albums I’ve heard in a while, instrumental renditions of pop cover tunes, both old and new, segue in and out of classical compositions by the great composers. Beethoven intertwines with Led Zeppelin, Adele with Bach, and The Mama’s and Papa’s with The Eagles and Chopin, just to name a few. Christine Brown has taken the popular concept of a “mash-up” to a new level with her imaginative fusions played with impeccable style and grace. While Christine’s previous music has been highly regarded in the new age category, Seamless should appeal to a wide audience across a number of genres.

And speaking of previous music, I had the pleasure of writing about Christine’s wonderful last release, Souvenirs, which enjoyed great critical success as evidenced by it winning “Best Piano Album of 2014” from Whisperings Solo Piano Radio. Her CD was selected from over 100 albums that were voted on by a panel of pianists and composers. A number of her previous albums have also received a variety of nominations and accolades. In addition, Christine has the rare honor of being selected as an official Kawai Piano Artist, representing this esteemed piano company. My write up on Souvenirs includes information on her history and musical background, and readers who may be interested are encouraged to check out the link to it above.

Her new album, Seamless, however, takes a very different compositional approach in its blending of wildly divergent music, genres, and styles. As revealed in my interview with Christine, this is not a new creative mode for her: “As a teen, I would often create piano versions of popular music I heard on the radio. The little sheet music available then was not written for piano solos, typically just basic chords, melody line and lyrics. I mostly played classical music, but also 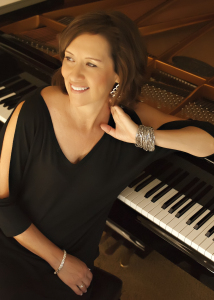 enjoyed contemporary composers. The concept of mash-ups of cover songs is not really that new for me! I consider myself a contemporary classical composer, which often overlaps into the new age genre of solo piano.”

I always find it interesting to hear about an artist’s creative process, and in this regard Christine shared: “My goal is to take a familiar melody and intertwine another piece, creating a blended song that is ‘seamless.’ For this album I really wanted to cover songs that had such a strong, compelling melody that even without the lyrics, the song would be recognizable. I also wanted to include a variety of music, from older classic songs, to current pop music. This album wasn’t something I just improvised and recorded. It evolved over a couple of years, but was put aside a few times. I kept writing and re-writing the songs, adding sections, moving sections, and my handwritten arrangements look like a puzzle, literally with measures cut and pasted together – it definitely wasn’t seamless in the beginning! This was a challenge that I really loved. I had so much fun that I’m already halfway finished with the second album of covers!”

Now that we’ve talked about the past and the future, lets focus on the present and the incredibly innovative music on Seamless. The album opens with an intro featuring the recognizable classical piece “Fur Elise” by Beethoven. Shortly thereafter, it segues oh so smoothly into, what is for me, one of the most epic rock songs ever, “Stairway To Heaven” by Led Zeppelin. Throughout the track, the two melodies intertwine exquisitely, and as Christine mused: “These timeless classics seem to form a perfect union, as if they were meant to be together.” I was so moved by this performance that I almost felt like standing up and applauding at the end.

From there we progress into a medley of three well-known pop songs called “The Police Trilogy.” According to Christine: “I have always been a huge fan of Sting and The Police, lured by the beautiful and simple melodies and lyrics. Here are just 3 of my favorites, woven into one piece – ‘Wrapped Around My Finger,’ ‘Fields of Gold,’ and ‘Every Breath You Take.’” I found it fascinating to experience these songs in a different light, purely as melodies without the lyrics and accompaniment, and from a classical perspective. Moving ahead (and back) in time is “Hello Someone” featuring two songs by Adele, “Hello” and “Someone Like You” paired with a piano version of Bach’s “Prelude Suite No.1 for Cello.” In a word – amazing.

With 11 song collages on the album, I won’t go into detail on all of them, but will present a representative picture and favorite moments. In “Moonlight Hallelujah” Beethoven’s “Moonlight Sonata” meets Leonard Cohen’s “Hallelujah” as these two classic and iconic songs blend smoothly in rhythm, phrasing, and breathtaking melodies. On the next piece, younger listeners will no doubt be familiar with the two songs by pop artist Sia: “Titanium” and “Chandelier.” An interesting and intriguing juxtaposition is on track 6 that pairs the darkly dramatic classical piece by Enrique Granados, “Valses Poeticos No. 3” with one of the lightest, most effervescent pop songs of the late 60’s, “Happy Together” by The Turtles. Talk about a yin/yang comparison – although Christine’s version of The Turtles song is infused with classical elements that allow it to blend more easily with Granados’ piece. 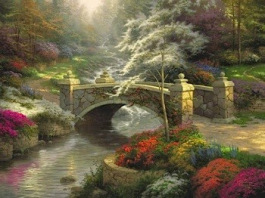 A pair of well-loved songs join in “Bridge of Grace” as Simon and  Garfunkel’s “Bridge Over Troubled Water” crosses over into the beautiful hymn, “Amazing Grace.” Also beautiful, yet heart-breakingly so, is the pairing of Bonnie Raitt’s “I Can’t Make You Love Me” with Sam Smith’s “Stay With Me.” My second favorite song on the album, after “Beethoven’s Stairway,” was “Hotel California Dreaming,” which interweaves The Mamas and The Papas “California Dreaming,” The Eagles’ “Hotel California,” and Chopin’s “Prelude Op. 28 No. 20.” Christine’s blending of these songs is masterful, and I particularly appreciated the lightness of the final notes added on after the darker minor key conclusion – a nice touch. The album’s last track provides a warm nostalgic glow in it’s fusing of Charlie Chaplin’s “Smile” with the classic “Wizard Of Oz” favorite, “Somewhere Over The Rainbow,” and makes for a perfect ending to an album full of surprises. 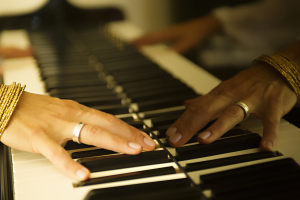 The title of this album could not be more accurate in describing the mastery in Christine’s blending of these unlikely song combinations. I would refer to her work as sonic surgery, in the way she was able to find and match melodic content from wildly disparate musical pieces and attach them so exquisitely as to make it feel like they were written as part of the same composition. While, for someone like myself, a member of the Woodstock generation, hearing the tunes by Led Zeppelin, Simon & Garfunkel, The Eagles, etc. brought back lots of memories, I also appreciated that Christine also drew from more contemporary sources like Adele, Sia, Sam Smith, and others, as well of course as the classical composers such as Beethoven, Chopin, and more – in essence providing something for everybody. The range of this album is astounding and the execution of it is brilliant, highlighting Christine Brown as one of the most imaginative artists in the solo piano genre today. I absolutely love this album and can’t wait to hear Christine’s next round of artistic alchemy.