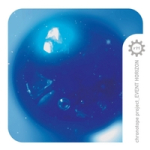 The word “chronotope” is not one you will find in the dictionary. It is, however, the nom de plume, or nom de synth in this case, of electronic music recording artist Jeffrey Ericson Allen. By his definition: “Chronotope refers to the essential unity of space and time. The music of Chronotope Project explores this time-space confluence and invites the listener on ambient journeys of deep texture infused with gentle pulsing rhythms and soulful melodies.” And after listening to Jeffrey’s self-described “Sensuous Ambient Music,” I’d say that gives a pretty accurate idea of what you will hear on this, as well as other albums by Chronotope Project.

Jeffrey’s background in the arts did not start with electronic music, however. Growing up in a musical household, he began cello lessons at the age of 8 with his grandfather, a cellist, conductor, and music educator. He went on to compose and perform classical music and even had his own string quartet as a teenager. While he didn’t major in music in college, he did take various music courses and has studied piano, voice, and the Japanese koto (a 13 string zither-like instrument). The flute is another of his favorites and he has a large collection of them from around the world. However, in the early 1980’s the emerging oscillations of electronic music became a focal point for Jeffrey. Immersing himself in the sonic circuitry of synthesizers, he has become quite adept at not only composing on them, but on programming and creating libraries of original sounds. Since that time Jeffrey has recorded a number of albums, which have been heard on radio programs like Hearts of Space, Echoes and Star’s End. He was also commissioned to compose dramatic music and provide narration for a series of more than a dozen soundtracks for children’s picture books.

I had the opportunity to write a review of his previous release, Chrysalis, which I portrayed as: “Lush sonic 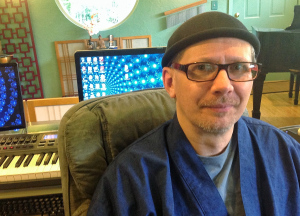 textures and ambient atmospheres conjure the element of space, with time being marked by gently pulsing rhythmic ostinatos and exotic percolating percussion. While some rhythmic elements evoke actual percussion instruments, others are created by unique and intriguing sequenced electronic sounds.” These are signature elements of Jeffrey’s sound, and are present on his latest release as well. This album, entitled Event Horizon, is described by Jeffrey in this way: “Each of the nine tracks has a strong sense of gravimetric pull toward a central motif, which enters the soundfield, evolves with the structure, then dissolves back into silence. The textures blend elements common to the art of Chronotope Project: the deep earthy foundation of sustained drones and rich chordal soundbeds, the flowing watery melodies, the scintillating sparkle of fiery sequences, arpeggios, and percussive inflections, and the etheric and mysterious veils that surround and envelop the texture.”

This description paints a perfect portrait of the first track on the album, entitled “Unwinding The Dream.” The yin-yang contrast of percolating sequencers providing forward motion with the atmospheric synthesizer textures and aqueous ambience was music to my ears. This kind of music is reminiscent of a particular sub-genre of electronic music known as “Berlin School,” which was first popularized in the 70’s by German experimental recording artists such as Tangerine Dream, Klaus Schulze, and Ash Ra, as well as influencing contemporary electronic musicians like Craig Padilla and Alpha Wave Movement. This is one of my favorite styles of music and I’m glad to hear it in a modern context. Track 2, “Akashic Love Songs,” features one of the elements I enjoyed most about the previous album, Chrysalis – the percussion. Jeffrey is a master alchemist in his blending of unique percussive sounds, both natural and sampled, and adding effects to them to create some of the most intriguing multi-layered rhythmic sequences that I’ve heard. On this track a tabla-like beat is accented by echoed drum hits stylistically reminiscent of Patrick O’Hearn. This entrancing groove, which is both earthy and ethereal, is the foundation of a soundscape that mixes a mélange of exotic electronic sounds, twinkling textures like stars falling from the sky, and acoustic guitar tones. I listened to this a number of times on headphones to try to identify all the elements that drift in and out of the mix, and while there is a lot going on, it definitely doesn’t feel cluttered. The word I would use to describe it is “magical.” 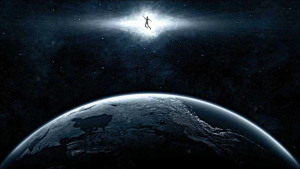 I was curious to hear what track 3, “Arecibo,” would sound like. I think I’m pretty safe in assuming it is a reference to the Arecibo Observatory in Puerto Rico, which has been used by SETI (Search For Extraterrestrial Intelligence). The music definitely has an otherworldly signals-from-space vibe to it. At just over 10 minutes in length, the next composition, entitled “No Birth, No Death,” is an expansive exploration of deep drift that picks up a subtle rhythm part way through, and is the longest piece on the album. An interesting addition on the next composition called “The Temple Bell Fades,” is the sound of piano – one of the few non-electronic instruments on the recording. The sound of the tolling bell gave me a Pink Floyd flashback for a moment – a nice sonic touch. More of Jeffrey’s incredibly cool percussion sequences grace a track called “Automatic Writing,” which floats on dreamy drifting clouds of sound. This track segues into the next one, “Geosynchronous,” and maintains the floating feeling, although the movement is provided by arpeggiated bell sounds, draped in silky shrouds of sensual synths. Track 8, the title track, has a bit of the feel I wrote about the first piece, with its pulsing electronic sequence and washes of ambient sound. The album draws to a close with a bubbly dreamscape entitled “The Path of Least Resistance.”

Interestingly, in scientific terms, the title, Event Horizon, commonly refers to the boundary of a black hole in space, and is defined as: “the point of no return i.e. the point at which the gravitational pull becomes so great as to make escape impossible.” I can say that from the very beginning of the first track on this album, I was drawn in by its musical gravity, and had absolutely no desire to escape. I truly enjoyed every track and every minute of this stellar CD. As a synthesist myself, I was extremely impressed with the seemingly endless palate of innovative electronic tonalities Jeffrey uses to paint his soundscapes. I also appreciate the spirituality that inspires his music. What I wrote about his Chrysalis album holds true for this one as well: “His Buddhist meditation practice has taught him the value of spaciousness and given him a sense of the transcendent, which is embodied in his music.” Jeffrey feels that Event Horizon is his “most mature and best-realized work to date,” and I would tend to agree, although I have enjoyed everything I have heard by this talented composer of time and space. Fans of Jonn Serrie, Robert Rich, and Steve Roach will find a lot to like in the sound of Chronotope Project. There is a cinematic quality to this music that could serve equally well as a film score or as a soundtrack for a movie in the mind’s eye. Event Horizon is a quietly masterful release that now occupies a place in the upper echelons of my all-time favorite ambient electronic music.