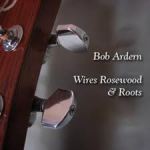 I’m looking closely at the photo of guitarist Bob Ardern to determine whether he’s got more than two hands. Judging by some of the intricate fretwork on his Wires, Rosewood & Roots CD, I can’t help but wonder. Seriously though, this veteran musician who hails from Nova Scotia, is one talented picker. His acoustic fingerstyle playing draws inspiration from the likes of early Al Stewart, Leo Kottke, Doc Watson, and English folk guitarists John Renbourn and Bert Jansch, among others. Bob’s own unique style is diverse and combines elements of folk, classical, jazz, and Celtic. He adds a distinctive flair with a technique borrowed from banjo playing as well.

Bob’s latest CD release contains twelve instrumental compositions, six of which are solo guitar, and six that include, at various times, piano, bass, cello, and percussion. The accompaniment, like herbs and spices in gourmet cooking are used sparingly and serve to subtly accent the guitar without adding too much of their own flavor. Among the intriguing aspects about Bob and his writing are his sources of inspiration. In his words: “I like to write songs that do more than simply rehash what everyone else has written. My music makes you think and touches nerves. I want to be more than just another writer of love songs so I look for my inspiration in newspaper headlines and history books, from the views outside my window as well as the reflections in the glass.” 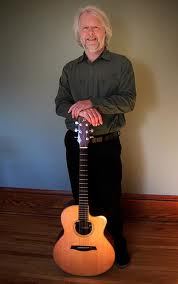 It’s “all aboard” on track 1 as we embark on “Dusty’s Train.” From its first chiming harmonics and rolling arpeggios to the chugging rhythm this song gets the album moving on down the line and gives a glimpse into Bob’s impressive guitar skills. The second piece, “Skating” is appropriately named in that the piano and guitar, rather than providing a background for the other to play over, features a number of melodic movements that are made in unison, like a pair of graceful figure skaters. And speaking of appropriate titles, track 3, “Palindrome” provides one of the most interesting musical concepts I’ve heard in a while. The term “palindrome” is defined as “a word, phrase, or sequence that reads the same backward as forward, such as madam or nurses run.” Bob took this idea and created a song based on it. As he explains: “The piece is a series of musical phrases played in forward sequence followed by the same phrases in reverse order – with slight timing changes so it doesn’t sound too uniform.  As I was composing it, it struck me that it would be an interesting form for the music to follow and the title suggested itself from the form.” This is a perfect example, as I mentioned, of drawing inspiration from unusual sources.

Bob’s stylistic range is well exemplified on “Scotch Rocks” which includes bass, drums, and a splash of piano on a jazzy number that still retains the folky feel from the finger picking. If there is such a category as “jazz-folk” this would fit right in there. In another unlikely inspiration, his song “Pray For Rain” takes its title from a recent drought in St. Lucia in the Caribbean. This piece adds the softer warmer sound of electric piano that steps lightly through the progression with the guitar, adding understated shadings here and there. Bob’s finger work sparkles on this composition. A couple of sprightly pieces, “Tea Rose” and “Flea’s Reel” follow. Although a reel is a specific form of lively Scottish or Irish folk dance, Bob points out, in a case of invoking artistic license that this Celtic-tinged song is not actually a reel but is technically a “slip jig.”

“Waiting for McAfee” is an instrumental folk ballad that seems to tell a story, although without lyrics it’s up to the listener’s imagination to tell the tale. In an example of drawing from historical sources, Bob’s composition entitled “Eleanor Of Aquitaine” is inspired by a major figure in the Middle Ages and a prominent name in women’s history. Born the Duchess of Aquitaine, she would eventually become Queen of England. This medieval theme fits right in with Bob’s interests and style of playing which was richly influenced by English folk music and groups from the golden age of this genre like Pentangle and Renaissance who created music based on these kinds of themes, as well as the history-based musical epics of Al Stewart.

For me, track 10, “Irish Mood” which is a pleasant pastoral piece with a hint of nostalgia, evoked a similar feeling as Sting’s “Fields of Gold,” which according to Sting: “is about feeling joyous, but knowing that the joy is going to end someday.” Of course the way one interprets music is subjective, especially instrumental music, but that’s the vibe I got from listening to “Irish Mood.” The next track, “Out Of Work” starts out laid back but picks up the pace with some nice cello playing, bass, and  snare drum played with brushes. The album ends on a real up-note with “Windrush, “ a definite toe tapper with some great bluesy guitar work accompanied by bass and drums.  There is an excellent video of Bob playing this song live, as well as a few others from this album, that can be seen on his website.  As a guitarist myself, I have a special appreciation for someone who has achieved the level of mastery on the instrument that Bob Ardern has. But I’m quite sure that anyone who enjoys relaxing acoustic music would find a lot to like in the well-crafted melodies of Wires, Rosewood & Roots.