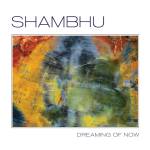 Having had the pleasure of featuring Shambhu’s previous release, Sacred Love, which was nominated as CD of the Year, Best New Artist, Best World Music CD, and Best Acoustic Instrumental CD by Zone Music Reporter, I was very much looking forward to his latest album, Dreaming Of Now, which was two years in the making. In my position as a music journalist, I have the opportunity to write about music created by recording artists from around the world. While emails and sometime phone calls are exchanged, it is not as often that I actually get to meet them in person. Fortunately, I did have the chance to meet Shambhu here in the San Francisco Bay area and get to know him quite well. As a result, I was invited to attend one of the recording sessions for this album, which was an experience I’ll always remember. 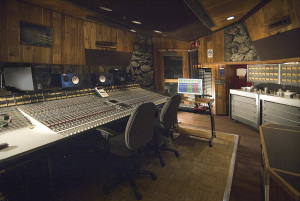 The session was held at one of the top professional recording facilities in the world – the famed Fantasy Studios in Berkeley, California. It was hard not to be star struck just walking through the building where the walls are lined with Gold records and photos of some of the artists who have recorded there over the decades, such as Stevie Wonder, Santana, Patti LaBelle, Sting, David Bowie, U2,  Journey, Eric Clapton, and Joan Baez, just to name but a very few. The reason I’m mentioning this is to provide some context for talking about how outstanding the sound quality is on this recording. But that is really just the beginning. After a certain point, the production moved to another world famous studio – Imaginary Roads, owned by Grammy winning producer and Windham Hill founder Will Ackerman, who helped produce the album along with Shambhu and recording engineer Thomas Eaton. Will also played an active roll in other aspects of the album in addition to the studio production. 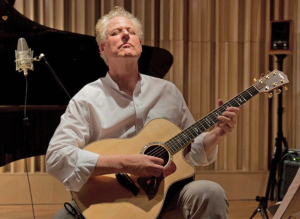 And then there is, of course, Shambhu himself – the nucleus around which all this revolves (and evolves). In addition to being an accomplished guitarist in his own right, one of the things that impressed me most about Shambhu is his ability to generate such elegant instrumental songwriting, full of unexpected chord changes with melodic twists and turns. The fact that this music not only flowed through him, but that he was able to write it out in individual charts for each musician and oversee a complex recording session, reflects on his level of musical mastery. However, beyond the notes and chords, there is Shambhu’s deep inner reservoir of spirituality that seeps into the pores of the music, and can be felt by the listener. Years of meditation and spiritual practice inform his creative process, as well as everything he does in life.

The album opens with Shambhu on acoustic guitar stating the song’s main theme, a beautiful descending progression that perfectly fits the title, “Waterfall.” As other instruments join in, the piece wends its way through a pastoral melodic landscape reminiscent of The Paul Winter Consort or the classic Windham Hill sound. The orchestration and arrangement of the tune is absolutely stunning. I don’t know if it is a skill he has developed or something intuitive (probably both) but Shambhu has a flawless sense of when to allow space for the music to breathe and when to bring it all together for dramatic effect. Everything sits perfectly in the mix. Even little touches like a cymbal swell, the ting of a bell, a brief cello accent, or a flourish on the piano, make their contribution in small yet immeasurable ways that reveal the vision and precision of the composer. This was one of the pieces that I heard being recorded in the studio in an early stage, and it was impressive then but nothing like what it has developed into. 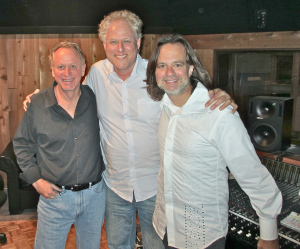 Everything I wrote about the first track also holds true for all of the others as well. Each one is so rich in detail that it would be impossible to cover them all in depth. But I’m happy to share some of the many highlights that stood out for me. While the opening song had a light and airy feel to it, the next one, entitled “Windows of Time,” is similar in instrumentation and structure, but has a deep emotional undercurrent that is quite moving. In particular, the violin work of Charlie Bisharat, which goes right to the heart and soul of the listener. There is also a nice sax solo by George Brooks, a consummate musician whose playing graces many tracks on the album. An interesting change of pace takes place on the next track called “Starbucks Landing,” which actually rocks out a little bit – maybe it’s the influence of the caffeine. This one finds Shambhu playing some electric lead guitar in addition to his acoustic. In a few places they were multi-tracked in harmony to create a twin guitar lead that brought back memories of The Allman Brothers.

Coming down off the buzz of the last tune is the title track, which is appropriately dreamy. Very different than anything preceding it, this one is a serene and spacious duet between Shambhu on acoustic guitar and virtuoso of wind instruments, Premik Russell Tubbs on flute, who later plays the electronic wind instrument on a track called “Jasmine.” Its’ an interesting paradigm shift from the intricacy of everything heard before. On the next track, called “Rendezvous,” it was nice to hear Frank Martin, who is a stellar pianist and keyboardist, have a chance to shine in the spotlight. Also worthy of focusing the spotlight on is the all-star rhythm section of bassist Kai Eckhardt and drummer/percussionists Jeff Haynes and Celso Alberti. Shambhu’s songs are not easy to play, and these guys totally nailed it throughout the album. One of my favorite songs, which also features one of my favorite instrumentalists, Jeff Oster on flugelhorn, is Devodance  (an homage to devotion, not the 80’s new wave band.) Jeff has the ability to take an instrument like flugelhorn, which is commonly associated with classical music and jazz, and use it as an ambient soundscape tool with drifting phrases and ethereal ambience. In this context, it is quite exquisite. An interesting contrast is provided by a couple of guitar-only tracks. “Searching” is a blend of folk and classical elements with Shambhu overdubbing a subtle guitar lead that accents his primary track. “Sanctuary” is a short acoustic guitar meditation that is like sorbet after a rich meal and draws the album to quiet close with a musical deep breath.

Dreaming of Now excels on so many levels that its’ hard to describe it without over-using superlatives. But ultimately, the music speaks for itself. I also wanted to shine a spotlight on the fascinating cover art, which is not what it appears to be.  While it looks like an abstract painting, it is actually a photograph of a piece of polished petrified wood. This is the work of Bill Atkinson, who was a member of the original Macintosh team at Apple and designed many of their groundbreaking software programs. Although I don’t have a crystal ball, I will predict that Dreaming of Now will soon be found at the top of the new age music charts. Shambhu has created a musical masterwork that sets the standard for music in this genre. 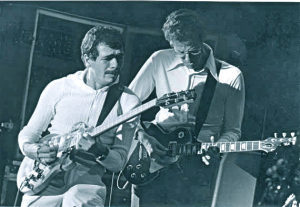 Shambhu on stage with Santana and band

While the following story is not necessarily related to this CD, it’s a little anecdote I wanted to share. Many years ago in the mid 1970’s on the east coast, I had the very rare opportunity to see my favorite musician, Carlos Santana perform an impromptu duet with another guitarist. It was a magic moment! When I met Shambhu at my studio in California, about two years ago he told me knew Carlos personally. When I related this story to him,  I learned, to my surprise and delight, that he was actually the other guitarist who played with Carlos that afternoon so many years ago! Shambhu has also played on stage with Carlos and the band.