In The Garden by composer, vocalist, and instrumentalist Seay (pronounced “say”), is one of the most uplifting, richly orchestrated, and lavishly produced recordings I’ve heard in some time, on a level with the work of renowned artists like David Arkenstone or Enya. In fact, while some of Seay’s vocals and arrangements may evoke favorable comparisons with Enya, she indeed has her own unique style that integrates a much wider range of world music influences. With themes that include love and respect for the earth, the oneness of all life, and more, In The Garden is an exquisitely detailed and deeply inspirational musical experience.”

Its not surprising that Seay’s music has a lot of international flavors considering her background. In addition to having lived in Washington, D.C., her father was an Army physician and their family spent a lot of time in the Far East, Korea, and Japan while she was growing up. Later, Seay got in touch with her English and Irish heritage while living in the UK and attending the prestigious Sotheby’s Art Institute in London with graduate work in Decorative Art and Languages, as well as studying in Spain. In addition, Seay has had extensive musical training with a number of renowned vocal coaches and graduate studies in voice from the University of Southern California in Los Angeles. She also spent a year studying Music Therapy with Don Campbell, author of “The Mozart Effect.” Seay now lives in one of the music capitols of the world, Nashville, Tennessee. Reflecting on the many places she has lived and traveled to, Seay shares: “I have always felt like I am a citizen of the world and my creativity reflects that.”

Seay has been fortunate enough, and talented enough, to work with an extremely impressive list of well-known artists. A short list includes: Annie Lennox, Cher, Crystal Gayle, and GRAMMY winning Indian composer Ricky Kej, to name but a few. She has sung on recordings for Motown, Warner Chappel Music, and more, as well as being involved in numerous large-scale projects for world peace and other humanitarian causes. Seay’s previous three albums have received critical acclaim, chart success, and airplay on hundreds of radio, satellite and syndicated programs with several million plays of her videos.

In my interview with Seay, she reflected on her inspiration for In The Garden: “The concepts for the music 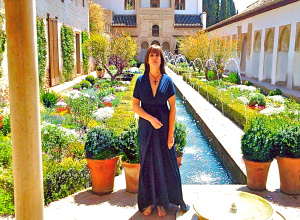 began on a trip to the Alhambra in Granada, Spain and the beautiful water gardens of the Generalife considered one of the seven wonders of the world. It’s just so magical, designed on the principles of sacred geometry, order, and beauty. I really wanted to take people to a timeless place of peace and beauty, to the mythical Shangri la, if you will. Another inspiration came from a most remarkable book written by Prince Charles called ‘Harmony’ that speaks about how mankind has abandoned it’s ancient balance with Nature and how rediscovering this balance is the key to solving our most crucial environmental issues and our great human purpose.” 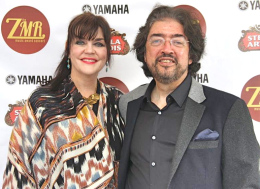 The list of people who worked on this recording in various capacities is quite extensive, and I’ll let Seay mention some of them in her own words: “GRAMMY winning Engineer Rob Beaton in Los Angeles helped me to begin this album mixing half of the project, which was almost a quintet with Seay, bassist Jerry Watts, Nashville arranger Geoff Koch and cellist Hitoshi Yamaguchi. It was a gift to have Rob, who mixes extensively film and trailers, consent to work with me and I learned a lot. Then GRAMMY winners Wouter Kellerman and Ricky Kej, along with the amazing composer/ engineer Vanil Veigas expanded the project. Stephen Peppos joined in for a track and then mix engineer extraordinaire Jeff Silverman who has worked with me for over a decade on my previous CD’s returned with a mix. Through it all engineer Jules Delgado spent hundreds of hours with me recording and creating these pieces.” There are many others, too numerous to mention, who played or contributed to the album and the complete list can be seen on its own page at Seay’s website. 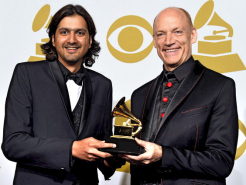 The album opens with Seay’s collaboration with Ricky Kej and Wouter Kellerman on a song called “Beautiful Earth.” The arrangement and orchestration are jaw dropping, and clue the listener in right from the start that this album is going to be an extravagant listening experience. Not to overdo the above-mentioned comparison with Enya, but I will just say that people who love the music of Enya, will be certain to enjoy this as well. In addition to the diversity of world music elements, one of the things that distinguish Seay is the content of her lyrics, which are all focused on themes of universal spirituality, environmental awareness, and higher consciousness. 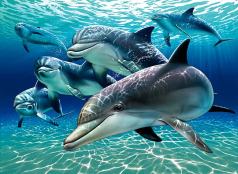 The second track, “Dream,” is the only one on which Seay played all the instruments without any other accompanists. It’s a lovely drifting piece enhanced by her wordless ethereal vocals. In my interview with Seay, she expressed a particular gratitude for track 3, “Oceanus,” and the reprise, “Into The Blue,” which concludes the album. In her words: “I composed this piece to the word “gratitude” after reading The Hidden Messages in Water by Dr. Masaru Emoto. I am an ocean lover, a certified diver and feel I truly am a water person. I received permission to incorporate pilot whales, humpback whales, bottlenose dolphins and the Pacific Ocean into the 2 tracks. This piece took along time to create, as I wanted to make my voice roll with the music and rhythms and as a part of the ocean waves. I made a very positive free flowing intention with my energy to say thank you to the waters of the world for it’s life giving presence.”

The album’s title track is an elegant composition that relies less on rhythm and more on Seay’s ambient keyboard textures, piano, and angelic vocals accompanied by Hitoshi Yamaguchi on cello. There is plenty of rhythm, however, on the next track, “We Are One,” provided by percussionist Erik Darken, as well as Pat Thomi and Jules Delgado on guitars, bassist Jerry Watts, and Geoff Koch on keyboards and orchestration. This piece has more of a symphonic pop feel with Seay’s beautiful vocals that sing of the interconnectedness of Life. I particularly liked the use of reverb, echo, and studio effects on her voice, which add an air of enchantment.

An interesting blend of elements is heard on “Anima Mundi,” which is another collaboration with Ricky Kej, Vanil Veigas, and their Raevolution Orchestra. Not surprisingly, with Ricky’s studio being located in India, there is a bit of Indian influence, especially in the intro. However, as the song evolves, it takes on a cinematic feel that brought to mind “The Lion King.” It’s a powerful and moving piece that is particularly distinguished by its detailed arranging and orchestration. A track called “The Golden Spiral,” refers to sacred geometry and a phenomenon found throughout the natural world. As Seay shared: “There is a grand design that God has 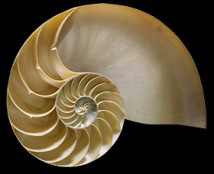 created. The spiral can be found in everything, shells, the way our blood circulates, the petals of a flower, the roll of the ocean waves, the shape of galaxies, the weather, there is a palette that God uses to create works of art.” I enjoyed hearing this theme expressed musically by Seay with her piano work driving the song, enhanced by layers of her keyboard atmospheres and vocal accents, along with Hitoshi on cello. Seay’s luminous composition with keyboardist Stephen Peppos entitled “Full Moon Sonata,” is as musically rich as it is visually evocative, and could certainly make for and exquisite film soundtrack.

At one point in my interview with Seay, I asked her if there was anything in particular that she wanted people to know about, to which she replied: “I sing every vocal. None of my vocals are sampled or are mixed in with any other sounds. I create and arrange and build my vocals every note and line.  Sometimes it is spontaneous and other times it is long process to create a desired effect. I have a 5-octave range and can sing in lots of languages and dialects. I am also an engineer and producer and have a studio. This has taken me some time to learn, working in the technology realm, as I need to get my ideas out, but it is very rewarding to bring your ideas to life.” 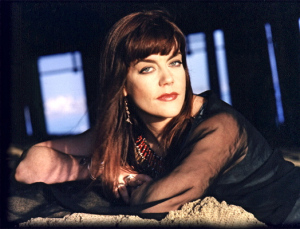 And she certainly does bring her ideas to life. The attention to detail throughout this album is astounding. Every song, whether ethereal or rhythmic, is characterized by lush production and outstanding musicianship by Seay, her accompanists, and studio personnel.  But in addition to the technical and creative aspect of the recording, is the intention and meaningfulness of Seay’s lyrics that makes In The Garden such an uplifting listening experience. In her words: “I seem to compose and write from a hopeful place; hope for the world, and for each other. I would say there was a definite convergence of inspiration for an artistic music project with themes of the earth, connection, and the splendor of life. One of the things I’d like for people to take away from this project, along with enjoying the music is that there is beauty and magic everywhere. I think it is a gift to be born and to experience life here on Earth.”