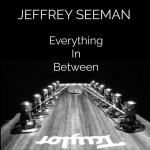 In talking to and writing about many different musicians and recording artists, I always find it interesting to hear about their creative process. For some, while they are working on their music, they don’t want to listen to anything else in order to maintain a strict focus on their own sound. And then there are those, such as guitarist/composer Jeffrey Seeman, who draws inspiration from what he hears and is happy to let it influence his creativity. From the young age of 8 years old, learning to play folk songs on a nylon string guitar that his mom bought him, Jeffrey soaked in the influences of artists such as Pete Seger, Peter, Paul & Mary and Joan Baez in the early 60’s. A few years later, as the British Invasion hit the shores of America, like so many others at that time, Jeffrey became intrigued by The Beatles and The Stones, and soon after, the psychedelic sounds of Jimi Hendrix and Eric Clapton. 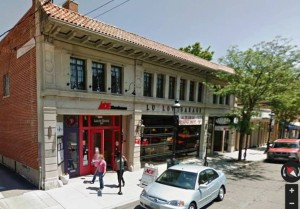 However, in 1969, a magical doorway opened for Jeffrey that changed his life. At the age of only 14, he had the rare opportunity to work at a new rock concert hall called Ludlow Garage in his native Cincinnati, Ohio. Also known simply as “The Garage,“ the club did not have a liquor license, so the teen and some of his friends were able to work there as unpaid staff. But the payment Jeffrey received was beyond what money can buy. He was able to watch the concerts from the side of the stage, be at rehearsals, and meet guitar royalty like BB King, Carlos Santana, Joe Walsh, Ry Cooder, Frank Zappa, Johnny Winter, Jerry Garcia, and many more. However, according to his bio: “But none of those guitarists influenced Jeffrey like Duane Allman (of the Allman Brothers).” When he first heard Duane’s famous slide guitar it was a revelation for Jeffrey. He had seen the light and a new life long passion was born.

Some of that passion was channeled into a rock band called Wheels that Jeffrey joined in 1976. The group achieved some degree of success and in 1982 recorded an album that was produced by Paul Barrere, the guitarist from Little Feat. But a dream come true for Jeffrey was when they shared the stage with The Allman Brothers! As time went on, Jeffrey became enchanted by the more acoustic sounds on the popular Windham Hill Records label that featured guitarists like Michael Hedges, Alex De Grassi, Will Ackerman, and more. So when the opportunity arose for Jeffrey to work on this new album with GRAMMY winning producer and Windham Hill Records founder Will Ackerman at his iconic Imaginary Road Studios, he jumped at the chance. 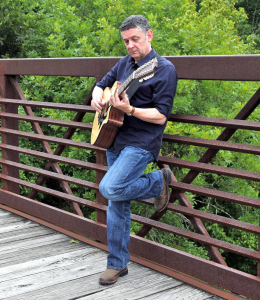 In September of 2014 Jeffrey shared several YouTube videos with Will, which prompted Will to suggest they should make a record together – and the project was born. According to Jeffrey: “I was attracted to Will Ackerman in the first place because Windham Hill earned a second-to-none reputation for stellar, bigger-than-life recordings of acoustic instruments and ensembles. This album has been a refreshing project because of the degree to which we focused on a melodic experience, presenting the songs themselves instead of brandishing technique or just making the music a platform for personal solo accomplishment. I actually only play one solo on the entire record.” In an interesting twist of fate, when Jeffrey released his Everything In Between album, the old Ludlow Garage re-opened and he was able to perform there on the very stage he dreamed of being on many years ago as a 14 year old.

The album gets off to a breezy up-tempo start with a tune called “Five Days Old,” that brought to mind some of Pat Metheney’s earlier music on the ECM Records label. Jeffrey’s free-flying guitar sound is further accentuated by the distinctive fretless bass virtuosity of Michael Manring who played on countless Windham Hill albums as well as with numerous other artists, including my own Ambient Alchemy album with Steven Halpern. Other sonic colors in the mix include the airy wordless vocals of frequent Will Ackerman collaborator Noah Wilding, the driving percussion of Jeff Haynes, who played with none other then Pat Metheney himself, and Tom Eaton on keyboards (more on Tom later.) Jeffrey’s guitar parts are multi-layered and include lively fingerstyle playing, big jangly strums on the chord changes, and accents of slide guitar. All are exquisite. This song would make a perfect soundtrack for cruising down a scenic highway on a sunny day. With regard to the title, Jeffrey shared this humorous anecdote: “I’m playing it for Will in the studio; he asks the name, and I say: ‘Well, I’m not really sure yet; it’s only 5 days old’ and he gives me this ridiculous look like: DUH, any other questions?” 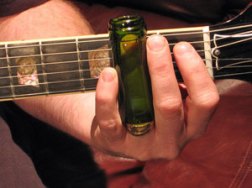 The aforementioned Duane Allman influence comes to the fore on the next song, “Acadia Walk” as Jeffrey delivers some tastefully melodic slide guitar work in a context with jazz, pop, and folk influences. The tune is beautifully written and I was impressed with the flow and dynamics of the song. Joining Jeffrey are, once again, percussionist Jeff Haynes and Tom Eaton on organ and accordion, along with Steve Bankuti on drums, and superstar bassist Tony Levin who is best known for his work with Peter Gabriel and King Crimson, as well as sessions with John Lennon, David Bowie, Stevie Nicks, Paul Simon, and many more.

A composition entitled “Michael’s Journey” is dedicated to the memory of a remarkable bass player from Cincinnati, the late Michael Bany. Another superstar is heard on this track, violinist Charlie Bisharat, whose extensive credits range from Yanni and Kitaro, to Michael Jackson, Keith Urban, and The Rolling Stones, among numerous others. Charlie’s playing on this track is incendiary and some fiery licks are traded back and forth between him and Jeffrey. Here I must mention a word about Tom Eaton who also plays bass on this song. While Tom is widely known as the recording engineer at Imaginary Road Studios, and a producer along with Will, he is also a brilliant multi-instrumentalist who adds a wide variety of accompaniment to many of the artists who record there. I recently had the pleasure of writing about Tom’s excellent own new release here on Music and Media Focus, as well as in Awareness Magazine.

While many of the songs on the album are highly detailed and intricate ensemble pieces, “Ever Present Always”

features a more simple, yet elegant duet between Jeffrey’s folky fingerstyle guitar with slide guitar accents and the soulful cello of Eugene Friesen, best known as a member of The Paul Winter Consort. A very unique sound is heard in the swampy ambience of a track called “Southern Night In The Woods,” complete with crickets and the night sounds of nature. Here Jeffrey is accompanied by a good friend of his from the Cincinnati Symphony Orchestra, Paul Patterson on violin, viola, and cello, as well as additional cello by Eugene Friesen. I honestly don’t think I’ve ever heard anything quite like this unusual blend of instruments and influences, which defies description.

Another distinctive hybrid tune is “Let’s Go,” with its mélange of contemporary instrumental and country flavors. Along with some of the previously mentioned musician’s, adding to the mix on saxophone is Premik Russell Tubbs who has also played with an extremely wide array of artists including Santana, Lady Gaga, Sting, Elton John, and many others. After a couple more excellent ensemble pieces, the album draws to a conclusion with an easy rolling, laid back duet between Jeffrey and Premik Russell Tubbs that leaves the listener in a relaxed, yet energized state after the lavish musical banquet that this album provides. 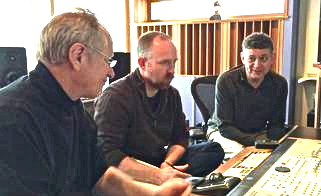 In a recent conversation I had with Tom Eaton, he referred to Jeffrey as “a serious player,” and I could not agree more. And Will Ackerman himself referred to Jeffrey’s music as “brilliant,” and remarked: “This is a remarkable piece of work, and we’re very proud to be a part of it.” Each of the many guitar styles Jeffrey plays are perfectly and tastefully executed, and the way they are blended and layered is masterful. I was also quite impressed with his songwriting skills, not only in the song itself, but also in the range of them throughout the album. Some of the ensemble pieces are elaborate with a number of accompanists which illuminate Jeffrey’s further talents as an arranger.

While I often write about albums that feature acoustic guitar, hearing slide guitar in this genre is a rare occurrence, so I greatly enjoyed Jeffrey’s unique take on it and the way he integrates it within a song, and with his other types of guitar playing. Everything In Between has something for everybody with its diverse stylistic influences and virtuoso performances, making for a truly “must hear” listening experience.