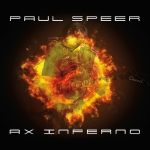 Although the title Ax Inferno, may conjure a variety of images in the reader’s mind, “ax” as it is used in this context, is a slang term for an electric guitar. And this new release by Grammy nominated and Emmy winning guitar virtuoso, Paul Speer, is quite incendiary, and does indeed kick some serious ax. I first became aware of Paul from his collaborations with new age piano maestro David Lanz. Their Natural States and Desert Vision albums were among the early music reviews I wrote for a magazine back in the 80’s. Their 1993 release, Bridge of Dreams, was a favorite of mine with Paul’s electric guitar soaring over David’s melodic keyboard soundscapes. Also appearing on that album was drummer Scott Rockenfeld of the rock band Queensryche. Since then, they have collaborated frequently, and their work has generated a Grammy nomination. Although Paul is best known for his fiery fretwork, he has also been a prolific producer and engineer who worked on over 250 projects in a very wide variety of musical genres through the years.

While most of my exposure to Paul’s music has been in what is considered a new age/ contemporary instrumental vein, this new release is quite something else. According to Paul: “I prefer to call my music “Modern Instrumental,” as I was never comfortable with the term “new age.” On this album, the blend of rock guitar with techno and electronica lives up to its fiery moniker. This is not music for yoga or chilling out to with a glass of chardonnay.  However, put it on while you are cruising down the highway, and you’ll be good to go. Just be sure to keep an eye on the speedometer once the adrenalin gets flowing. And the juices do flow as Paul puts the hammer down on the opening track called “Contents Under Pressure (Rock Mix). Charging out of the gate with tires smoking, it’s clear right from the start that this album is going to be an electric guitar magnum opus – and it is. Paul’s single note muted picking gets the song revved up, with drum fills and synthesizer pad creating an intro. Once the bass line kicks in, its’ off to the races with a blend of soaring lead and rapid fire riffs. This song and the next one, which are subtitled “Rock Mix” appear again with a different spin at the end of the album as “Techno Mixes.” Paul continues to keep the pedal to the metal on track 2, “Accelerator (Rock Mix),” as a fat sounding analog synth arpeggiator pattern lays down a pulsing groove with drummer Ron Krasinski pushing it to the max. I especially enjoyed listening to this with headphones to make out the details of Paul’s many layers of multi-tracked guitars playing at the same time – very cool! 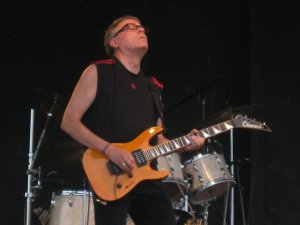 The sound of sirens and extreme weather make an appropriate into for a song called “Tornado Warning.” On this one, Paul lays back on the guitar until about half way through, when the six-string storm starts raging. A track called “Vortex” features interlocking sequencers creating an intricate electronic pattern for Paul to interact with on guitar. I have to say that it is unique, and for me exciting, to hear high tech music combined with rock guitar, as it is on this album. But I particularly like how the guitar adds a more organic and live element to the programmed synths, sequences, and samples. This approach began for Paul about three years ago. As he tells it: “I was getting into electronica, trance, EDM (electronic dance music), etc. and really liked the pulse and textures that kind of music has. But it doesn’t have guitar! I decided to do an experiment and created the techno version of “Accelerator” and put it up on my Youtube channel asking for feedback, since it wasn’t a style people knew me for. Well… the response was overwhelmingly positive and gave me the confidence to take it further and compose more in that vein.”

On track 5, “Helion Prime,” Paul eschews the rocking lead guitar in favor of trippy textures and effects with his signature, muted guitar picking triggering a rhythmic delay to provide momentum for the song. Although Paul has lived in a number of places over the years, perhaps there is something in the vibe of his current home of Memphis that has found its way into a tune called “Powerglide.” While still having electronic elements, the song cooks with a dash of funk, including some soulful organ sounds and smoldering lead guitar. A little of that vibe carries over into the next song entitled “Megatron,” with its driving mid tempo beat and bluesy rock fusion guitar solos that brought to mind the legendary guitar work of Jeff Beck and Ronnie Montrose at times. The last two songs are the aforementioned “Techno Mixes” of tracks one and two, “Contents Under Pressure” and “Accelerator.” Calling them rock and techno mixes, gives a pretty clear idea what the difference is between them and what to expect. But it was very interesting to hear the two versions and Paul’s  re-interpretation of them. 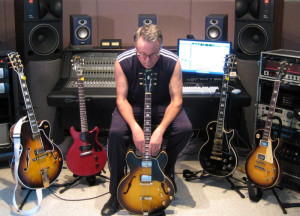 As the album title implies, Ax Inferno brings the heat. Roger Fisher, guitarist and founding member of the band Heart, has called it “guitarzy, fat-bottomed, creative and nicely recorded.” As a guitarist myself I have a special appreciation, not only for Paul’s masterful playing but for the incredible tones he is able to coax out of his instrument. He has put a lot of time into crafting his sound and it shows. Ax Inferno burns with creative fire and illuminates the contrast of futuristic high tech music and soul searing electric guitar. While Paul Speer has always been an innovator, his latest release finds him exploring exciting new sonic frontiers. Although he was being drawn to the latest techno sounds, he also had an ax to grind, so to speak. In his words: “This one I just had to rock out … I was ready to cut loose again and Ax Inferno is the result.” All I can say is: mission accomplished.