With a title like “The Atlantean Legacy” it’s easy to conjure up an image of a large time-worn leather bound manuscript with yellowed parchment pages, yet in reality, this book couldn’t be more 21st century. I received my copy on a CD-ROM disc that I read on my computer, and it is also available as an on-line download for your Kindle or other e-book reader. It came as part of a multi-media package that also contained a separate CD of music inspired by the book. I’ll talk about that later, but first a bit about the book and it’s author.

Paula Bates holds a Masters Degree in Counseling and works as a Licensed Mental Health Counselor. She is also certified in Hypnotherapy, Reiki, and a number of other holistic health practices, with a particular interest in women’s spirituality, which she facilitates groups and workshops in. Not surprisingly, she is also an

accomplished visual artist and painter. I say “not surprisingly” because of the incredible level of detail and imagery with which she paints her word pictures in the book, reflecting her artistic inclinations. According to Paula: “Since I was a child, creating art has been an integral part of my life. As a mother, a writer, and a trained therapist, I find the details in my subject matter are very important to me.” Her highly descriptive narratives leave little to the imagination while allowing it to soar at the same time.

The book dives right in and immediately immerses the reader in the story of Akana, a gifted young lady who is about to become a priestess on the mythical continent of Atlantis. This fictionalized account is steeped in metaphysical lore and pays particular attention to life and rituals in the sacred temple where she is in training. The book contains something for everybody with elements of mysticism, spirituality, ancient history, adventure, romance, and intrigue. Having read many books over the years by Edgar Cayce and others about Atlantis, I found a number of kindred themes woven into the fabric of this story, such as the use of crystals, energy grids, extra-terrestrial connections, dimensional gateways, and more. Readers who enjoyed the classic book “Initiation” by Elizabeth Haich will find a lot to like in this story as well.

The aforementioned descriptiveness of Paula’s writing style definitely drew me into the story and imbued it with a cinematic quality. Having drawn comparisons to “Avatar”, this would indeed make a wonderful movie – an idea not lost on the author who holds the hope that this will one day come to pass. Whether one believes that Atlantis was real, this story takes you into a fascinating and magical world that holds relevance and parallels with our own, as shortsighted modern day people continue to experiment with powerful energies that could ultimately lead to our destruction, as they allegedly did in those ancient times. “The Atlantean Legacy” is an intriguing blend of metaphysics and fiction that takes the reader on a journey of imagination and vision – an artistic bit of storytelling that makes you feel like you are there. And, who knows, maybe we were? 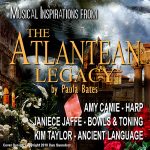 I can imagine nothing more gratifying to an author than for their work to be the inspiration for another artistic creation, as is the case with this CD being inspired by the writings of Paula Bates in “The Atlantean Legacy.” Amy Camie is an award-winning harpist, recording artist, and public speaker on the healing power of music, whose lush entrancing harp playing evokes a feeling of ancient times. Janiece Jaffe, who is a professional jazz performer with an extensive background in sound healing and various holistic modalities, adds ethereal textures on bowls and toning. Her beautiful crystalline voice reminded me at times of Enya. They are joined by Kim Taylor, a registered nurse, holistic healer, and teacher who creates invocations in an ancient language which adds a far away feeling of another time and place.

The story of how this music came about is an interesting one. The three came together, set up their instruments, and after a section of the book was read, they spontaneously created music in the moment based on the vibe of the writing. The energy flowed and the entire recording of 12 tracks was done in three hours. It really captures the magic and feeling of the story and creates a perfect background ambience while reading the book, or for listening later to immerse yourself in the spirit of Atlantis. If ever the book becomes a film, this would be a wonderful soundtrack.