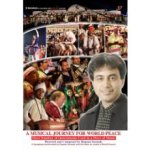 Its not everyday that I have the opportunity to write about something that has been awarded a place in The Guinness® World Records, but the musical event portrayed in this colorful DVD, is one of them. The concert, entitled A Musical Journey For World Peace, was a massive (and that is an understatement) international symphony that was held in Assam, India on February 24, 2013, and was attended by more than 30,000 people. The extravaganza brought together over 500 participants from around the world, including 106 vocalists and 370 musicians. The world record referred to is: “Most Instruments Used In A Musical Composition,” in this case, an incredible 315 unique instruments. A representative from The Guinness World Record Office, London was actually at the event and presented a plaque on stage certifying the award. The person receiving this prestigious honor was Rupam Sarmah, the creator and nucleus of A Musical Journey For World Peace. While awards of this nature can be the achievement of a lifetime, for Rupam, it was all about the message of universal harmony.

Originally from Assam, a north east state of India, and currently living in northern California, Rupam is an internationally awarded music and film director, a singer, songwriter, producer, engineer and a media entrepreneur. In addition to his artistic endeavors, he is also a computer engineer who has held senior management level positions at top media companies. For more than 20 years, Rupam has written songs in various languages and has directed music in feature films that have received a number of awards. His most recent film project, entitled In Search Of God, is an inspiring story of a young lady from the US who travels to India on a quest for deeper meaning in her life. The film received Best Documentary Award and was included in the Oscar 2011 long nominations list. I recently saw this film and was very impressed. The theme of unity between seekers on different spiritual paths, which was reflected in the concert event, was also a primary element in this film. For his next movie project, Rupam is directing a feature film that sheds a compassionate light on people living with disability. 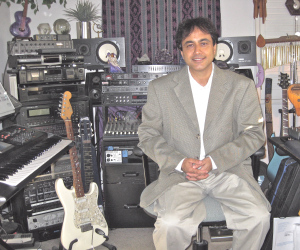 I had the opportunity to meet with Rupam at my studio in the San Francisco Bay area, and although he has achieved international acclaim for his work, he is a humble and down to earth person, whose only goal is to uplift consciousness in the world however he can.

And if this is what he is aiming for, he most certainly hit the mark with A Musical Journey For World Peace. Watching the DVD of the concert, I was blown away by it’s profound statement – and embodiment, of cooperation and unity. Hundreds of performers filling the immense stage dressed in the traditional costumes of their many countries, was quite a sight to see. Including Rupam up front, looking stylish in his cream color Indian-style suit and fedora hat as he sang, conducted, and served as the master of ceremonies. Watching the huge musical assemblage flawlessly performing the various movements of this nearly 40 minute symphony, was a living example of the beauty that can happen when people work (and in this case, play) towards a common goal. In Rupam’s words: “If only we could find acceptance, compassion, and love for each other regardless of religion, race, color, identity, the world would be a better place. We each have a choice of what we choose to focus on and that can make a world of a difference… a different world… how much we give is not a function of how much we have, but how big and open our heart is.” He goes on to say: “Music is the catalyst to bring people together and send the message of peace and love. The credit goes to the entire team, their motivation, their dream and the ability to make it happen.”

As can be imagined, an event of this magnitude and complexity took a monumental amount of effort and devotion to bring to fruition. Rupam planned the event for about two years. The actual composition, which he wrote all the music for, took over 6 months. In my interview with Rupam, he talked about the preparations involved: “I spent more than 5 months of dedicated time to train and rehearse with the vocalists and musicians in groups and remotely. We rehearsed with most of the core musicians and vocalist groups together for almost a month, and 3 days of stage rehearsal with all participants. Sound equipment started setting up a week in advance. I wanted to have everything set up including all microphone, camera, and lighting connections 3 days earlier so that we can get 3 days of rehearsal on the stage. It was a 40,000-watt sound system with over 300 channels connected in mixing boards, and lots of lighting and camera equipment. The stage was approx. 9000 square feet and 25 feet from the ground to the top of the stage where we had the drums section. There were people on the stage, off the stage, administrative people, local government, security officers, maZumba officials, who helped to make this event successful. Anything could have gone wrong – security was a big issue for a small cultural city like Jorhat with that many people in an open stadium. Everything went well without any problems.” 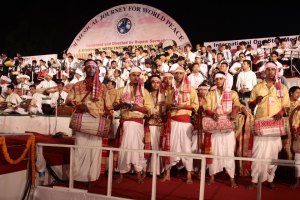 Another aspect that went well was the music itself. At first, watching the 4-minute trailer for the DVD, which is composed of excerpts from the concert – although wonderful, didn’t give me a full sense of how the music was a continuous flow from beginning to end over 37 minutes. But when I viewed the DVD, I was impressed with how smoothly it moved from one section to another with no breaks in between. According to Rupam: “The composition includes various styles sung in English, Sanskrit Mantras, Japanese Chanting, Tibetan, Irish, Chinese, Latino, Cuban, Assamese Borgeet, Bihu, Jhumur, various World Folk, Bengali, Hindi, North Indian Classical, South Indian Classical music and more.  The music needed to transition seamlessly from one section to the other with variations in time signature, key signature, tempo, and style change.” It occurred to me that with approximately 500 people on the stage playing a complex international symphony, at literally any point in the concert any number of things could have become a problem. But the absolute elegance with which it all played out is a testament, not only to Rupam’s vision and dedication, but also to the collective artistic energy of everyone involved.

I also wanted to comment about the camera work on the DVD. It’s probably next to impossible to imagine the challenges of documenting an event of this enormity. But the numerous cameras that were used did a remarkable job of drawing you into the festivity with an up close look at the performers and their interactions. Actually, in one way, it might have been better than being there, in terms of really seeing all that was going on. Being in a crowd of that size and viewing it from a fixed position would have been impossible to take in all the details of something that expansive. But the filming and editing allowed perspectives that would not have been possible in person. The event was shot from numerous angles, with panning, zooming, overhead views, etc. I was also impressed with how they were able to focus on which performers on that huge stage were soloing at any given time throughout the performance, as it was continually changing from moment to moment. The veritable rainbow of colors in the performer’s native homeland costumes also added to the visual magic. 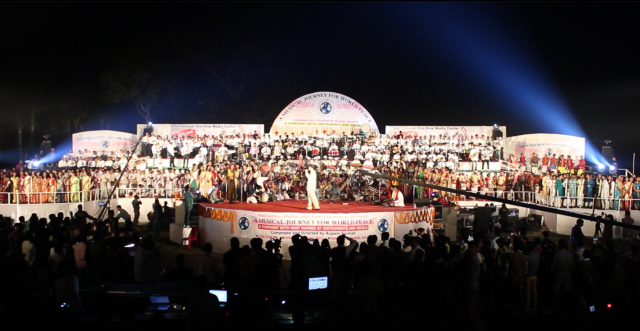 Trying to pick out individual musical highlights in an event of this magnitude would extend this article to about three times its present length. While the four-minute trailer gives a taste of this monumental concert, it barely scratches the surface of what is to be experienced on the DVD. This is truly a case of the whole being much greater than the sum of its parts. And this certainly holds true for the event in general. In fact, it is really the theme and reason for being of the concert. According to Rupam, “When dream of one person becomes the dream of many more, it can transform a small dream to a much bigger one and create wonderful things in this world to bring people together with love, peace and light.” An article in Time Magazine about the event quoted Rupam as saying “We did it together! We all came together here and have done which cannot be done without you. It is a small dream, but we did it and it belongs to everybody and it’s a history for us.” For 37 minutes, A Musical Journey for World Peace is the sound of many hearts beating as one. There is so much more I could write about this incredible event and the film that documents it, but it seems only fitting to leave the last words to Rupam, who says: “A Musical Journey for World Peace will continue… a song can change a moment, good music can touch someone’s heart, open their eyes, show a new path, change a community, and spread the message of love and peace to the world.”