I really like the first line in this quote from ambient guitarist Carl Weingarten, speaking about the inspiration for his new album: “Someone once told me that people don’t have ideas, ideas have people. And such is the case with Life Under Stars.  What began as a whisper in solitude took shape over the next seven years and eventually became a chorus of pedal steel, flutes, trumpet, bass, piano, percussion, vocals, and guitars.” Being an ambient guitarist myself, I’m always eager to hear what other artists in this genre are doing. And I was particularly interested to hear this new release by Carl, having had the pleasure of writing about his previous album, Panomorphia, about which I said: “There is really no one else who sounds quite like Carl Weingarten. His style is adventurous, exploratory, and intriguing, and to be able to create a distinct sound in today’s crowded music market is quite an accomplishment in itself.” But as innovative as that album was, his new one takes it to a whole other level.

However, its not like Carl just effortlessly pops out a new recording every year or two. Life Under Stars was actually eight years in the making by the time it was released. In fact, this album almost didn’t happen. As Carl shares: “I wasn’t going to make another ensemble album. That’s what I tell myself every time I finish one.  As rewarding as they are, and as grateful as I am for the music, as a one-person operation, it takes me years to compose and arrange the music, lasso the artists, and shuffle between studios to record an album of this scale.” 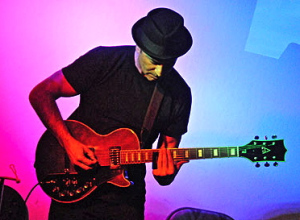 And the scale is impressive. In addition to Carl’s own contributions on acoustic and electric slide guitars, dobro, keyboards, looping, and sound design, not to mention writing 10 original compositions, the album features the talents of a dozen other instrumentalists, including bassist Michael Manring, Jeff Oster on trumpet and flugelhorn, keyboardist Kit Walker, Robert M. Powell on pedal steel, drummer/ percussionist Celso Alberti and more. According to Carl: “Over the many months we recorded, the players became the muse, inspiring me further, and Life Under Stars took on a life of its own.  It’s a pleasure to collaborate with so many wonderful musicians, and the act of creating new music with a community of artists is still a thrilling and rewarding experience. I tend to write for musicians I know and who know each other, and when they arrive to play, they’re already among friends, even if some of those friends are on tape.  So every track of every recorded performance is personal and as diverse as the musicians themselves.” Carl also credits engineer and co-producer Noah Perry: “whose ever-critical ear and attention to detail gave me fresh insights into my own work and made him an essential collaborator.”

In addition to being a multi-instrumental musician, Carl is also an award-winning photographer with a degree in cinema production. I mention this because some of his work along those lines is incorporated in the first music video for the album (see below), which is also the opening track on the CD. Entitled “I Remember Summer,” the video blends past and present including some of Carl’s latest endeavor – aerial photography, as well as memories of growing up, captured in footage he shot going back to the 70’s, and home movies his grandparents took in San Francisco in the early 1930s. Like the images in the video, the music itself captures the carefree fun in the sun feeling of the summer season. Ambient music can often be ethereal and meditative, however, Carl’s version here is an 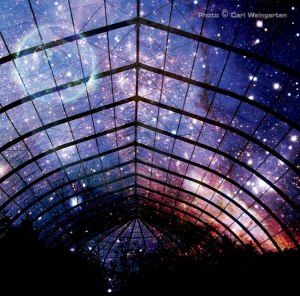 upbeat top-down cruise to the beach. This lightness of being carries over to the next track, a tune called “Evie.” On this one, Carl shares acoustic guitar roles with Pat Duffey. Adding to the freewheeling vibe of the song is the airy flute playing of Barbara Else, and the propulsive drumming of Brian Knave, who performs on two of the album’s tracks. When I mentioned earlier that no one else sounds like Carl, the same can be said for Michael Manring, whose distinctive electric bass playing is instantly recognizable and adds his unique signature sound to any track he plays on – and he plays on a lot of them here. As a side note, Michael, Carl, and ambient horn player Jeff Oster have a trio called Blue Eternity that performs around the San Francisco Bay area, including at a local planetarium, appropriately “under stars.”

Carl’s long-standing work with looping and rhythmic delays is front and center, providing a clock-like groove on a track called “A Different Rain,” which is a scaled down duet with drummer Celso Alberti, that also includes Carl on keyboards. On a slightly more-dreamy note, is “Mr. Sundance,” highlighted by the always-tasteful accompaniment of Jeff Oster on trumpet and flugelhorn. Equally ruminative is Carl’s duet with keyboardist Kit Walker on “Little Island.” One of my favorite tracks was a trippy piece called “Nightwalk.” On this one, Carl dips into his sound designer bag of tricks to create an atmospheric sonic collage that with Jeff’s ambient muted trumpet had a bit of Miles Davis meets Pink Floyd vibe – very nice! It is music like this that has earned Carl accolades for being one of the most innovative guitarists in this genre. 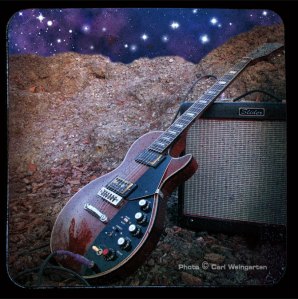 While his music has been called “cinematic jazz,” certainly an expansive categorization, it’s not quite broad enough to describe all the elements and nuances that make up Carl’s sound. His use of slide guitar and dobro in an ambient context is groundbreaking, and transcends the blues and Americana roots they are generally associated with. In Carl’s hands they become textural instruments that add exotic sonic colors to his unique soundscapes. In addition to his multi-instrumental talents, Carl’s sterling choice of accompanists is part of what makes his music so incredibly cool. The songs are not complex. “Simple is beautiful,” says Carl. But all the elements magically merge to create some of the most fresh and inventive music I’ve heard in a while. Life Under Stars is an album I’m over the moon about.