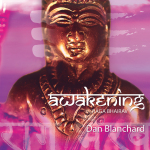 I’ll never forget the first time I heard the haunting strains of Ravi Shankar’s Indian classical music while in college during the late 60’s. It was so radically different from the music of Jimi Hendrix, Santana, and The Doors that I had been listening to, and was totally exotic and alien to my ear. Yet there was something in it that spoke deeply to my soul and I kept coming back to it, allowing it to beckon me down a ancient mystical path to a place within. Since that time a number of rock groups, most notably The Beatles, have dipped their toes into the mysterious waters of Indian music, incorporating sitars and other elements of it into their sound. However, relatively few Western musicians have delved deeply into this complex music in its pure form. Dan Blanchard is one who has. 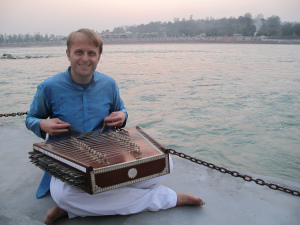 Starting at a relatively young age, Dan has been engaged in an intensive study of Indian classical music and the santoor (an ancient 100 string Indian instrument similar to a hammer dulcimer). On his website he writes about the origin of this music as stemming from Nada Brahma (Nada = sound, Brahma = creation) and that according to traditional beliefs, the whole universe was created from sound and vibration… the primordial Om. There is a deep spirituality that permeates this music, which Dan is very much attuned to. In addition to his musical pursuits, he is certified as a yoga teacher, yoga therapist, and soon as a practitioner of Ayurvedic science. He uses sound and these disciplines for healing and transformation and to support balance in our daily lives.

There is a lot to know about Indian music and Dan shares some simple explanations. His album Awakening is subtitled Rāga Bhairav (pronounced “Buy-ruv). “Rāga is the one of the main components of Indian Classical Music and can be considered a song or symphony.  Rāga,is  a Sanskrit which word, means “that which colors or leaves an impression. A mood is created by its notes and phrases.  Rāga Bhairav is an early morning rāga, ideal for meditation, contemplation, and introspection.” However, as interesting or enriching as it may be to know about the meaning behind the music, the knowledge is not necessary to simply enjoy it or reap the benefits from hearing it.

Indian music is often keyed to different parts of the day, and as mentioned, the music on Awakenings is created for the morning. According to Dan, “Morning sets the tone for the entire day.  Due to modern lifestyle and/or habit, often we rush into our day unconsciously.  Taking some time to start the day in a peaceful way has many benefits…” He has arranged the music on Awakening to follow a particular flow starting more meditatively, and gradually increasing tempo and adding rhythm to encourage movement and build energy before slowing down towards the end to allow the listener to integrate the musical journey. His Peaceful Vibes website provides additional information about the music as well as morning practice tips. 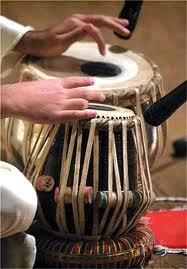 Listening to Awakenings takes me right back to those mystical feelings that were awakened on first hearing Ravi Shankar. As can be expected, the first two tracks are quite peaceful and make you want to take a deep breath, close your eyes and go within. On track three, “Emerging,” a clay drum called an Udu, imparts a wonderful earthy ambience and adds sense of motion to the music. The energy builds on track four as tabla drums add to the momentum. The tabla are a pair of hand drums which are integral to Indian music and can produce a wide variety of sounds depending on how they are played. As mentioned the tempo increases, and by the time we get to the end of track six, “Elation,” things are really cooking. The perfectly synchronized interplay of the santoor and tabla at this high velocity is impressive, and reflects the years of training it takes a musician to achieve such a level of proficiency.

“Transformation, “ the seventh track is a nice long one that adds female vocal, flute, and harmonium and might be equated to a “cool down” after a vigorous workout at the gym. Appropriately titled “Integration,” the last track retains the flute and hamonium bringing us full circle back to a meditative space, allowing time to assimilate what has transpired. I have no doubt that starting the morning in this fashion would be a wonderful way to greet the day and could certainly create a different perspective than what most people are used to. Dan and the musicians on the album have done a masterful job of providing an exotic and engaging musical experience that has practical applications for health and well-being.