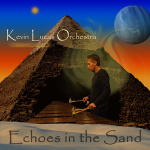 Back in the late 1960’s, Marshall McLuhan, one of the prophets of the electronic age coined the now-iconic phrase: “The medium is the message.” For recording artist and percussion virtuoso Kevin Lucas, his medium of music is all about conveying messages. The new CD by The Kevin Lucas Orchestra carries messages that are both timely and urgent, particularly with regard to climate change.

Kevin Lucas, in addition to being an up and coming music producer, is also an award-winning percussionist who specializes in marimba and vibraphone. While he has many accolades to his credit, what is most important to him is using the power of music to inspire and communicate. In his words: “When I created all of my parts for this album, I pictured in my body, mind, and soul that our ancestors are sending us messages. These messages are called “echoes in the sand.” Each and every song on the album is a different message that they are sending that relates to our modern world, yet resonate from a time and place in ancient history.”

While Kevin has many years of experience with percussion and music in general, this album marked a turning point for him. It was his collaboration on this recording with Raveolution Studios in Bangalore, India that helped take Kevin’s music to a whole new level. As Kevin describes: “I 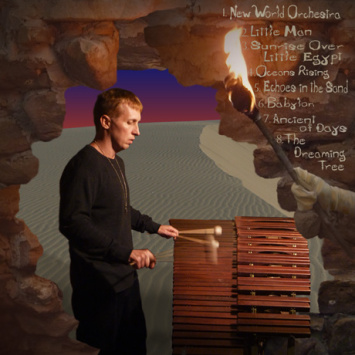 am extremely grateful and honored to have worked with Raveolution Studios on this album. They did an amazing job. Their producers, engineers, and video editors are absolutely amazing and so talented! Raveolution Studio has helped me truly evolve into my prime of the art form of my musical style within the last year. I feel like a very powerful part of my soul has awakened during the making of Echoes In The Sand.”

The influence of India, and of world music in general, is strongly felt throughout the album, as it is on the first track entitled “New World Orchestra.” With Raveolution providing many of the excellent musicians on the project, the exotic spices of Indian music flavor many of these savory compositions. Percussion lovers, especially, will rejoice at the rich banquet of sounds that both animate and accent the music. The next tune, a Ricky Kej composition called “Little Man” ventures a bit into pop music territory and features gorgeous female vocals sung by Alexis D’Souza. A real highlight was the exquisite electric guitar work by Paul Speer, a long time favorite of mine, who added his distinctive and instantly recognizable style to this song. Another Ricky Kej composition is “Sunrise Over Little Egypt,” which as the title implies, unveils a bit of Middle Eastern influence. I found it fascinating to hear Kevin’s incredible marimba and vibraphone playing in all these different contexts. I’ve always loved the sound of these two instruments and it was a treat to hear them played by someone with Kevin’s skill and creativity. I also appreciated the sonic seasoning of Indian percussion as played throughout the album by Varsha Kej. 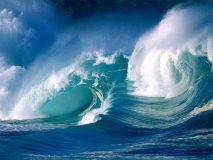 playing. Here he describes his inspiration for this piece: “When I wrote the marimba and percussion parts to this album, I thought about spiritual aspects that were speaking to me. For example, in “Oceans Rising,” I could actually hear and see the ocean and the waves crashing against the shore as I performed in the video. I could see the beauty of the ocean, as well as its wrath and power, and I beheld it with great respect. I wanted my parts to sound like the oceans rising up, both in appearance and in sound, and I wanted to portray the fact that they are sending us a message that has been brewing since ancient times.”

The beat doesn’t let up on the next song, the album’s title track, which is the last of three compositions by Ricky Kej. This track definitely rocks with an interesting blend of contemporary electronic sounds mixed with earthy percussion. As he spoke about with the last song, Kevin shares his process on this one as well as the album in general: “In the title track, “Echoes In The Sand,” I silenced my mind and tried to listen to what our ancient ancestors were telling us. When I started feeling things, I used these feelings to come up with the parts. I went through this process for every song.” A bit of Middle Eastern influence is heard once again on a track called “Babylon,” which features the innovative flute playing of South African musician Wouter Kellerman who also collaborated with Ricky Kej. Another fine contribution to this piece, as well as others throughout the album is the keyboard playing of Tholsi Pillay. I also enjoyed the rich mélange of cultural elements on the last two tracks “Ancient Of Days” and “The Dreaming Tree.” 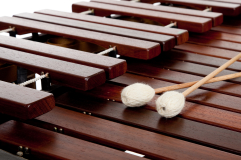 As a huge fan of marimba and vibraphone, it was a real treat to hear them as featured instruments. This is a rarity, especially in a new age music context, although this album definitely has a lot of world music influence as well. There were a number of times while listening that I wondered if someone could actually be playing them with such speed and dexterity, or whether there was some studio editing done. Luckily, I was able to see Kevin playing live on the “Echoes in the Sand” video (see below) and actually watch his virtuoso playing in real time. It was mind boggling, and I highly recommend checking this video out. But in addition to the stellar playing by Kevin and all the musicians involved, the composition, arranging, and production are all first-rate. The collaboration of percussion maestro Kevin Lucas with Raveolution Studios has conjured a uniquely exotic sonic blend that will reward listeners with an original and evocative musical experience.