It’s been about 3 years since I wrote about Celtic harpist Trine Opsahl’s enchanting album, Somewhere in a Hidden Memory, which I greatly enjoyed. In fact I was even inspired to think about learning to play the harp after hearing it. So I was excited to receive her new album, Unbroken Dreams, which features a new musical partner – her daughter Josefine, who is quite accomplished on the cello. According to their press release: “Beyond words, and one in spirit, best describes a unique bond between a mother and daughter who effortlessly share the gift of musical expression.” In Trine’s own words: “As mother and daughter we unite through our music in a timeless beautiful place of deep peace and tranquility as we resonate in unison with the language of our souls.”

This idea of peace and tranquility is woven into the fabric of the music Trine creates, not only in her recordings, but in her other musical endeavors as well. I remember while writing about her previous album, how impressed I was to learn about her work in playing at the bedside of hospice patients to facilitate peaceful transitions. In this regard, Trine studied to become a Therapeutic Musician practicing under the IHTP (The International Harp Therapy Program) and is now a Certified Therapeutic Harp Practitioner . She is also an advocate for healing music and harp therapy within the health care system of Denmark where she lives.

Interestingly before this, Trine had a practice as a lawyer, which she left to pursue her path in healing music, 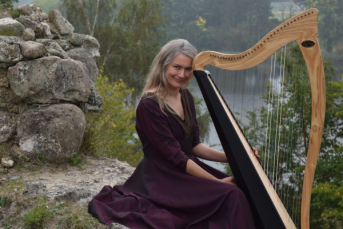 which she considers her “true purpose in life.” As she describes: “Creating and playing our own music is like a prayer. The music creates a sacred space that brings us closer to who we are and to each other. Spending time at the bedside of a hospice patient is maybe the best time spent at all. If you listen carefully to the dying you will get so many gifts and an appreciation of life and death as an ever unfolding reality. And if you listen even more carefully, the wisdom from the dying can even guide you and heal you. We need this healing so badly. What I probably want most of all is to share this wisdom and healing through music.”

Not surprisingly, Trine’s daughter Josefine heard the call of the muse as well, and exhibited a natural talent for music when she began improvisation on a cello at 12 years old as a young developing Waldorf School musician. 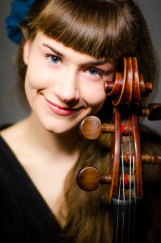 She began her studies at the Royal Danish Academy of Music in Copenhagen in 2011 and the following year she received 1st prize at the Music Academy Scholarship Competition for cellists. Josefine is now finishing her Masters Degree in Copenhagen, and has received a gold prize at the international classical music competition. Her music is quite diverse, and in addition to playing contemporary classical music, Josefine also delves into the avant-garde and electronic music genres. She is also a member of a number of different improvisational and progressive folk ensembles. This new album with her mother however, is not their first recording together. In 2008, they released their first collaborative album entitled Leaving my Silent Empty House, which was also released as a special edition for HRH Prince Henrik in 2010, celebrating his 75th anniversary.

In my interview with Trine, she explained what the name of her new album means to her: “Unbroken Dreams has so many meanings to its title. But the first and most important is probably that we as human beings have so many dreams broken thoughout life but to me it seems like there is always this one dream, which can never be broken. This unbroken dream is like a golden thread wowen through life. Most of the time this reality is only realised by our higher conciousness. Sometimes we recognize it in glimpses. This unbroken dream is what gives meaning to it all, even though invisible most of the time. The unbroken dream is also unfolding through the generations. Being mother and daughter playing together is a very beautiful and very strong expression of the unbroken dream.”

The album opens with a piece called ”The Last Grasp Of Winter.” The first thing that struck me about the music was the tonal contrast between the airy lightness of the harp with it’s heavenly connotations, and the considerably more earthy warm woody sounds of the cello. I don’t recall hearing these two instruments together in a duet before and I appreciated the yin/yang balance of them. It was interesting to think that although they are both stringed instruments, they couldn’t be more different in sound and the timbral range they inhabit.

Unlike Trine’s previous album which featured a number of shorter pieces and interludes, Unbroken Dreams has 13 full length tracks, with many in the 5 to 7 minute range. With this many songs, I won’t go into detail on all of them, but will be happy to share, what were for me, some of the highlights and favorite moments. Since the cello is by nature more of a solo instrument, for the most part, the harp provides the background and the atmosphere that the cello soars in. There are also times when the cello refrains and the harp is heard by itself. 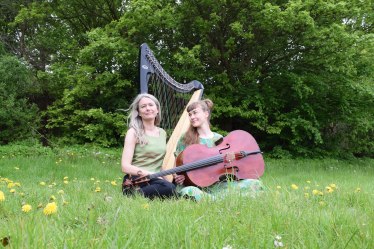 As the title implies in ”A Star In Heaven Is Born Tonight,” a lofty air is created, with the twinkling harp notes evoking celestial sounds. On ”Dawn/The Light Dances My Love,” I was impressed with Josefine’s range of expression on the cello. From the almost violin-like upper registers she played over Trine’s sweeping glissandos in the beginning, to an impassioned solo midway, and then the more soulful melodies towards the later part, I got a feel and an appreciation for her impressive talent.

I found the song names to be quite well chosen and remarkably descriptive of the music. Compositions like ”Drifting On Silky Clouds,” ”A Fairytale,” ”Diving Into An Ocean Of Love,” and more, sound quite like you’d expect them to as reflected by their titles. I liked the somewhat Celtic feel of ”Castle Of Unbroken Dreams,” which had a cinematic quality that I could imagine being in a film soundtrack. I had a similar sense about ”Rosebed Garden,” which was absolutely gorgeous and was one of my favorite tracks on the album. There is a heartfelt warmth and sentimentality in it that I found very moving. Another favorite was ”Norwegian Summer.” Be sure to check out the live performance video of this song recorded in the Concert Hall of the Royal Academy in Copenhagen, which can be seen at the end of this feature article.The album ends with ”Ladybirds And Butterflies,” that for me, evoked the bittersweet feel that characterizes a lot of Celtic music – very lovely.

Unbroken Dreams is an album filled with exquisite artistry and intricate interplay. It is often said that certain musicians who play together have ”chemistry” with each other. In this case, it goes beyond having chemistry to sharing DNA. There is a quality in the interaction of Trine and Josefine that seems both transcendent and effortless in its flow. One thing of interest in my interview with Trine was her statement: ” I will maybe not call myself a musician as much as I would call myself a sound healer. The center of my music and my approach to music is the therapeutic and healing capacity.” While the healing intent definitely comes through in her music, Trine is an exceptional musician in every way, and more than deserves to be known as one. And the same goes for Josefine, who despite her young years, is highly accomplished, not only technically, but also stylistically and intuitively. The blend of the earthy and the ethereal on Unbroken Dreams makes for a beautifully uplifting and heart-warming listening experience that is nourishing to the body, mind, and spirit.