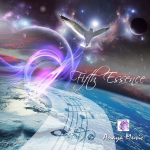 The sound of Fifth Essence is the sound of heaven and earth. Heavenly in it’s ethereal angelic voices and new age ambiance, and earthy in it’s rich symphonic strings and neoclassical influences. While Anaya is a talented composer whose intriguing and often unexpected chord changes and melodies caught my attention, I was most impressed with her heartfelt intention in creating beautiful music to inspire and uplift the spirit of the listener. In addition to the music, the album’s visionary cover art is gorgeous and inspirational as well.

Anaya’s interest in music began early in life for her, which is not surprising seeing that she came from a musical family in her native country of Brazil, which itself is rich in musical heritage. As she describes: “ My desire to learn the universal language of music emerged when I was 4 years old.” She began studying piano and guitar, going on to give recitals to friends and play in her school band, and eventually studying in a music conservatory. Interestingly, even as child, Anaya knew that she would be both a musician and a scholar.

Education has played a major role in Anaya’s life and the above-mentioned balance of the earthy and ethereal in her music is also reflected in the extensive range of her studies over the years. On the more concrete level, she has devoted 30 years of her life to academia earning undergraduate and graduate degrees, including a doctorate degree from Loughborough University of Technology in England and a post doctorate degree in Information Systems from Syracuse University in the United States. In the 1980s she moved to the capital of Brazil, Brasília, and began focusing more on managerial and academic activities. During that period she was the director of the Applied Social Studies department at the University of Brasilia. Anaya also did work in her field for the United Nations.  The complete list of her achievements and positions in the academic world is too lengthy to mention here in detail.

At the other end of the spectrum, Anaya’s studies of the metaphysical and inner dimensions of life read like 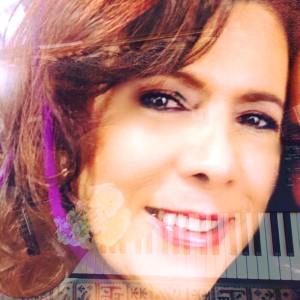 the table of contents for an encyclopedia of spiritual and holistic disciplines. Early in life she was introduced to Hinduism, Zen Buddhism, and particularly yoga, which she still practices today. As she evolved in this direction, she went on to study I Ching, Shiatsu, aromatherapy, kinesiology, Chinese medicine, Feng Shui, tarot, Kabbalah, astrology, and much more. As a Reiki master, Anaya has trained many therapists over the years, in addition to seeing private clients. She also did classical ballet for 30 years, was an Olympic gymnastic for 5 years, and is still doing a variety of martial arts and teaching Tai chi. While it may be hard to believe that one person could cover so much ground, the reality is that what I have listed is more of an introduction than a complete listing.

With all of this going on in her life, there was a period where music was on the back burner, but she eventually came back to it. According to her bio: “In 1990 Anaya again dedicated herself to music, initially as a classical singer and then composing guitar music. Anaya has over 200 songs registered at the Rio de Janeiro School of Music. In 1995 she devoted herself to studying keyboard and using computer and sound technology. Her earlier experience in computer science made it an easy transition to accomplish. Anaya was finally able to bring together the senses and technology.” And in our interview she went on to say: “I always searched for a deep understanding of universal spirituality to create a union between technology and the senses. That became the heart of my work. Our best instrument is the universal harmony of being.”

Which brings us to her current music release, Fifth Essence. The music on this album is intimately connected to an event that happened in Anaya’s life in the recent past which profoundly shook her world. In 2014, her long time husband and love of her life passed away. As many musicians do when experiencing intense emotion, she channeled it into her music as an expression of her innermost feelings. According to Anaya, “The song “The New Journey” is the first song I did in the day after my husband died last year.” 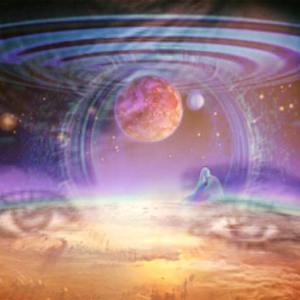 Generally, when I am writing about an album, I discuss the tracks in the order they appear in the album. While “The New Journey” appears later in the album, I will feature it first since it expresses an experience that some of the other songs flow from. One of the things I found most interesting about this piece was the intro. Although Anaya’s music is usually quite lush and multi-layered, this song begins with a solitary violin sound, and a bit of very subtle accompaniment in the background. The feeling I get from it, especially knowing the back-story, is that of being alone in the world. However, as the song evolves, she is joined by rich orchestration, as if to express: “You are not alone.” At over 12 minutes in length, it is by far the longest piece on the album, and expresses an intricate emotional odyssey in its duration.

And now, back to the beginning. The album’s first 5 tracks are part of a suite entitled “In love”. They are much shorter pieces and range from roughly a minute to two minutes each. In our interview, Anaya shared: “The song ‘In love’ is the song I did when joy and happiness came back to my life.” The first movement starts with Anaya’s wordless vocals layered and enhanced with reverb to create a celestial choir effect. Through the use of electronic keyboards, Anaya is able to add elaborate orchestration and symphonic emulations. Both classical and new age influences are evident in her style. The remaining 4 movements continue in this vein, as does the album in general which is composed primarily of orchestral string and choir arrangements, with a bit of flute and guitar.

But equally important as the “sound” of the album is the intention that Anaya has imbued the recording with. 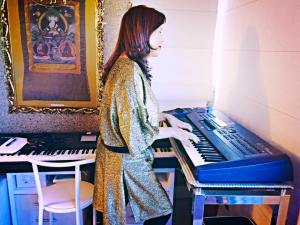 Her years of dedication to spirituality and metaphysical study are as much of an instrument in creating this music as her keyboards and voice are. As she shared in our interview: “My path is to touch people’s soul through music as I connect to my own inner Being. I create music to elevate the human spirit… to fulfill a collective yearning shared by humanity for harmony, unity and balance. It has been an amazing journey of transcendence with and through musical arts. The magic of music and the profound feelings of love are a divine instrument of perfection to give re-birth to our soul. Music is the sound of Light.”

With this in mind, I would encourage the listener to not only listen “to” the music, but to listen “into” the music… to feel the vibration of Anaya’s intention for healing and spiritual attunement.  Fifth Essence is not an album created for entertainment, but is more of a vehicle for meditation and inner awareness. To conclude, I’ll leave the final thought to Anaya who shares: “The magic of music is felt amidst the silence after the sound.”