It used to be that musical categories were fairly well defined, and that most songs fit neatly into little boxes called genres. However, in recent times, it seems that the lines have become blurred and the boundaries breached, so that just about any style can be merged with any other style to create some of the most innovative blends imaginable. A perfect example of this is the latest release by Canadian singer/ songwriter Lea Longo, entitled Songs Of A Siren. Here she combines her love of jazz and pop standards with the spirituality of mantra and kirtan chanting to provide a completely different twist on the East meets West concept.

So what is the motivation, and what thread ties together these disparate musical elements? According to Lea: The title, Songs Of A Siren, is influenced by the Greek Mythology, The Sirens, where the female sirens seduce the sailors to shore. I was intrigued by this concept while my life was undergoing transformation, so I decided to produce a collection of love chants. Showcasing the beauty of the female energy and voice, it enchants the listener into a blissful state. The Sanskrit symbol (on the cover) represents LOVE. I hope listening to these songs will bring you divine love.”

The devotional aspect of this music is a deeply felt part of Lea’s life that flowered when she traveled to India in 2006 and “discovered music mantra chanting with true chanting masters.” After this awakening, she pursued certification as a 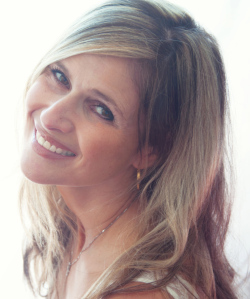 Kundalini Yoga instructor, which she is still active in as a teacher and practitioner. In addition, Lea has given numerous kirtan music performances at events such as The Toronto Yoga Conference, Open Mind Festival, Montreal Yoga and Chant Fest, Bhakti Fest, and more She has also produced albums like Zen Voyage and Peace Chants that feature sacred mantras. Interestingly, before this Lea had a highly successful career in a more traditional Hollywood setting, where her songs gained major television placements in shows like “Dawson’s Creek,” “Party Of Five,” Fox TV series “North Shore” and “Felicity,” as well as in the movie “Cheaper By The Dozen” starring Steve Martin.

Although the well-known classic song “Fever” was written in 1956 and has been covered by Peggy Lee, Elvis, Ella Fitzgerald, Ray Charles, Bette Midler, and even Madonna, if you’ve never heard it with sitar and tabla, and interspersed with Sanskrit chants, get ready for a trip into uncharted territory. This is, in fact, the song that opens the album. Along with the sitar playing of Radford Crasto and Shawn Mativetsky on tabla drums, are Western instruments such as bass, drums, and some very tasty George Benson-style jazz guitar, all of which provide a grooving background for Lea’s vocals, which range from sensual to spiritual, as she alternates between the traditional lyrics and mantra chanting. Imagine Sade meets Deva Premal and you’ll get an idea of this very cool combination. I particularly enjoyed Lea’s jazzy scat singing in unison with the guitar towards the end.

The next song on the album is also a pop standard ballad entitled “The Very Thought of You.” This tune, which dates back to 1932, also has a storied history and has been covered by some of the greatest singers of our era. Lea’s upbeat rendition forgoes the sitar and tabla, but does morph between the song’s English lyrics and devotional chanting in Sanskrit, as do all of the songs on the recording. Extensive instrumentation, including drums, percussion, keys, guitar, bass synth, and back-up vocals were provided by co-producer/ engineer Jesse Jaeo Tolbert throughout the album, in addition to various accompanists, including Alex Paquette on bass and guitarist Andy Dacoulis, among others. 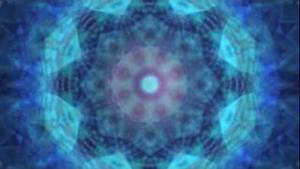 After the first two “cover” tunes, the album features an original by Lea entitled “Love Is All You Need.” This one starts off with a mystical vibe of Lea’s chanting along with Rad on sitar, Alexandre Lavoie on flute and the electric piano of Allister Phillip before moving into a surprisingly funky R&B-driven beat that reminded me rhythmically a bit of the classic 70’s hit, “Low Rider” by War. However, given the hybrid nature of this album in general, any blending of unlikely genres should not come as a surprise. This is followed by another of Lea’s lovely original compositions called “Jaya Love” – a breezy uplifting tune with smooth jazz influences.

The last of the standards that Lea covers is “Here’s To Life,” a more recent tune first made famous by Shirley Horn and later by Barbara Streisand. Although I’m sure their versions did not feature sitar and tablas. Despite a touch of those exotic instrumental inclusions, Lea plays this one a little bit more straight ahead with her beautiful voice adding just the right sultry vibe to the jazzy background. After this point the last four songs are all originals, two written by Lea and two by Rad Crasto with mantra lyrics by Lea. I particularly liked the carefree ambience of “Sail Away,” with atmospheric synthesizer textures adding a bit of magic. This piece segues into the next track called “To Heaven,” which is an extension of “Sail Away” and carries on the vibe to the next level, in this case, heaven. The album draws to a close with a great re-mix of track 3, “Love Is All You Need,” by Ben Leinbach, a well-known San Francisco Bay area producer who has worked with top kirtan singers such as Jai Uttal, Snatam Kaur, Donna DeLory, Jaya Lakshmi, and many others artists in a variety of genres. Here, Ben adds his own special touch to create an enchanting mix of Lea’s heartfelt composition.

When I first read about the fusion of musical elements that this album combined, I couldn’t help wondering how it would

all come together and what it would sound like. But by the end of the first tune, I knew that I was going to be in for a very interesting and unique listening experience. Songs Of A Siren is an ambitious undertaking that could have easily missed the mark if done by a less accomplished and innovative artist than Lea Longo and her talented team of accompanists. Over the course of ten tracks, Lea has managed to create a musical mélange that appeals to both the inner and outer dimensions of the listener. Songs Of A Sirenwill have your toe tapping and your spirit rising.