The name Max Highstein is one I’ve been familiar with from his many music recordings dating back to his earliest releases Touch The Sky (1987) and Stars (1988) – both excellent albums in the new age/ contemporary instrumental genre. These days he is more active than ever in the music field and has continued his pioneering work in guided meditation programs, which he began in 1984. The series is called The Healing Waterfall and is part of Desert Heart Multimedia, and Desert Heart Recordings, Inc. Over the years, their sales have exceeded 100,000 units, and most recently won About.com’s 2012 Reader’s Choice Award for Best Meditation Tool. The collection also includes a wide selection of guided imagery for many different purposes, as well as music for massage, meditation, and relaxation. Max is well suited for this particular niche. In addition to being an accomplished pianist and composer with a background in jazz, pop, and classical music, he holds a Bachelor’s degree in Music, two graduate degrees in Psychology and has an active practice offering personal sessions and workshops.

While there are many guided meditation programs available on the market these days, a number of factors make some stand out above the others. Those factors include: concept, writing, narration, pacing, and background music, all of which are given the highest professional consideration in The Healing Waterfall series. Their programs are written, rewritten, and edited by writers who know healing and are carefully tested and re-tested. Professional voice artists are recorded in a high-end recording studio and the narration is polished to perfection. All music is composed by company founder, Max Highstein, an award-winning recording artist with decades of experience in this field, and an impeccable ear for just the right music to go with each program. All of this adds up to superior production with a level of quality that listeners can feel and benefit from. This is one reason these programs are widely found in private use, therapy offices, medical clinics, and even religious services. 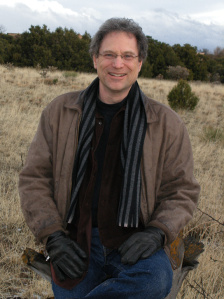 As the title implies, this new release is the third in The Healing Waterfall series, and is the final installment of a trilogy that began many years ago. In speaking of the history behind the series, Max shares: “I wanted to give people a feeling of deep relaxation and peace, something they could use to engage the immune system, or just take the weight off their shoulders. So I wrote a script about an idyllic mountain setting with a waterfall. Then I hired a TV actress with a beautiful voice to narrate it (Jill Andre, whose credits included Hill Street Blues). And I rented a recording studio with a grand piano and synthesizers, and recorded my score.” From an initial run of just 100 cassettes, The Healing Waterfall  took off and went on to become a nationally recognized bestseller in the guided meditation field. He goes on to say: “Returning to The Healing Waterfall to make this third and final installment was like visiting a dear old friend. A deep appreciation of nature, and its ability to restore and heal us of stress, motivated the creation of this program as the ones before.”

Like the original recording in the series, the imagery in this new one also features a serene forest walk, mountain stream, and waterfall with an inviting pool below, and has the added benefit of an angelic figure at the top, pouring healing light into the water. According to Max: “Whatever your philosophical beliefs, it’s about as soothing a listening experience as you’ll find, and the music, scored to the narration, is soft, inviting, and relaxing without being too sweet.” For me, it didn’t take long after the meditation started to feel myself becoming immersed in its calm ambiance with the cares of the day beginning to drift away. As mentioned, the soothing music of the piano, keyboards, and flute create the perfect atmosphere for the journey. I also liked little accents like the sound of a rainstick, which enhanced the waterfall imagery. The narrator’s voice has just the 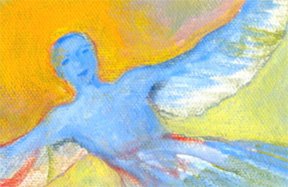 right kind of tone and cadence for a guided meditation. I appreciated how detailed the imagery was and the way it draws you into the scene and makes it feel like you are there in this enchanted forest floating in a sacred pool in the company of an angelic presence. I was going to say that the narration is so descriptive that it leaves nothing to the imagination, although I think its actually more the opposite – it leaves everything to the imagination. By the end, you really feel like you have been somewhere else without leaving your seat. The meditation runs 17 minutes and is a good length for a quick getaway or to recharge on a break from work, after a long day, when you feel stressed, or as a peaceful start to your morning. The meditation is followed by the musical soundtrack without narration, also 17 minutes. Samples of the program can be heard at The Healing Waterfall website and there is also a wealth of information there about imagery and guided meditation and the many ways it can be used. 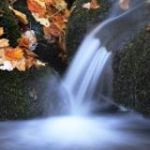 As mentioned, there are many programs on the market for relaxation, stress relief, etc. yet few are on the level of The Healing Waterfall, with its blend of exquisite music, imaginative scripts, attention to detail, and degree of professionalism. With an impressive background like he has, it is no surprise that Max Highstein has become a leader in the field of relaxation music and guided meditation. I’m glad to have discovered this series and know exactly where to go when I’m in need of a calm supportive space to unwind in.