Voyage is the third release from Japanese musician/ painter/ sculptor/ architect Takashi Suzuki following his critically acclaimed and award nominated Cycle CD, and his debut album, Resonance which was named “Best Ambient Album” in the 2011 ZMR Awards. Although he has begun to blossom as a composer at a later stage compared to the other art forms Takashi has spent a lifetime mastering, his music has been well received and he has developed a compositional style that bears resemblance to his minimalist painting style. A quote I came across refers to this, and describes his music in this way: “It offers a variety of soundscapes that you can tell have originated from someone who was a visual artist – each piece has the feeling of having been sculpted from the ether and then painted with sound.” And a press release from his previous album mentions how he “sculpts synthesized soundscapes into soothing yet mildly adventurous portraits that work equally well as sonic wallpaper or immersive listening.”

Voyage exudes “a Zen-like serene spaciousness,” to quote myself from a previous review. From the monochromatic cover art to the sparse uncluttered graphics, everything about this release is ultimately ambient. Unlike many CD’s that feature extensive liner note, song descriptions, photos, and detailed booklets, Voyage is a statement of simplicity with only the track names and brief credits on the back cover, and on the inside, a poem that pays tribute to the spirit of his home city of Hiroshima:

it seemed, for what was gone forever,
Speedily woke a new endeavour;
Out of darkness, out of fire,
Sprang new radiance, new desire;
The stricken city rose to see
Not what has been but what will be

Hiroshima! no finer pride
Did ever earthly city guide
Than yours, – to be the happy rest
Where the glad dove of peace may rest
Where all may come from all the earth
To glory in mankind’s rebirth!

The iconic historical event that this city is known for is referenced musically in the opening track entitled “Hiroshima Eternal.” Takashi expounds on the meaning of the song: “It is about the spiritual journey after death that we all have to face one day. “Hiroshima Eternal” may suggest the atomic bomb tragedy that occurred on August 6th 1945. But the album is neither about the event nor propaganda against the nuclear weapon. It is my imaginary story of someone who died in the event and is going through the unknown spiritual world.” As the song unfolds with a low electronic drone, about 20 seconds in, a deep powerful explosive sound appears which slowly fades into the background as layers of synthesizers sweep in serenely to fill the void. Anyone familiar with Takashi’s previous music will find a similar slowly evolving minimalistic style here. According to Takashi, this is the beginning of the first of two movements and is about wandering between the worlds. In the second movement comes deeper realization eventually leading into angelic choirs sounds at the end, reflecting the “Eternal” part of the title.

And speaking of titles, this album represents a departure from Takashi’s previous works in this regard. On his first CD, Resonance, all the songs were called “Resonance In Blue,” followed by the numbers 1 through 10. On his next release, Cycle, the tracks were simply entitled “Episode 1,” “Episode 2,” “Episode 3,” and so on. On Voyage, however, each song has a separate title, such as “The Beginning,” “Seeking For The Light,” “The Knowing,” etc. The titles refer to the imaginary stages during the journey through the spirit world. According to Takashi: “It is just like a journey in our present life in which has different stages to begin and come around again. Therefore, Voyage is not a pathetic story about death – it is my neutral view that our spirit will carry on existing after death. Death is not the end of our life but the beginning for the next life. The last track on the recording suggests the return to the physical world. My previous album Cycle is also sharing the idea of the regeneration.”

There is a sense of continuity that flows from one song to the next carried by Takashi’s signature style that emphasizes texture rather than melody. What I wrote about his Cycle CD is equally true for Voyage: “Following in the comparison to Zen, the music is more about ‘being’ than ‘doing.’ Synthesizers provide the medium he creates his ‘ambient tone poems’ with. The waves and washes of sound can best be described as floating, dreamy, and atmospheric and lend themselves to meditative states and quiet reflection.” Another quote comes from a media colleague of mine, Ken Jenkins, who enjoyed the music very much for this reason: “It does not draw attention to itself, but it fills space, hanging in the air like a slowly evolving sunset.” Comparisons have been made to Takashi’s music and that of Brian Eno’s early ambient albums, Steve Roach’s Structures from Silence, and particularly the Liquid Mind series. I would say that, for the most part, those are relatively accurate points of reference. Listening to it both on speakers and headphones, I noticed that the music’s abundant harmonics were more perceptible with headphones.

The expansive soundscapes drift from track to track maintaining a homogeneous vibe throughout. I especially enjoyed the last two tracks, which introduced some new and surprising elements into the mix. On “Knowing To Return,” the second half morphs and evolves, punctuated first by subtle percolating synthesizer blips and bleeps, and later accented by synth bass, and eventually light percussion in the last part. As the title would imply, the final track, “Following The Guiding Bells,” the sound of bells, are part of the serene sonic landscape. Like the previous track, the piece progresses through various movements including electronic effects and an actual drum beat, making this the most rhythmic track on an album that is primarily deep space music. I really liked this addition and wonder if Takashi included it at the end to signal a new direction for his next release?

I feel that there has been an evolution in Takashi Suzuki’s music with each successive album he has released.  For me, Voyage is his best work so far. Given the critical and popular success his music has enjoyed, I’m sure that this album will appeal to his listeners as much or more.

Photos of a monument in the garden of The Hiroshima Central Library,  designed by Takashi Suzuki for Edmund Blunden’s poem ” A Song for August 6th 1949″  which won first prize in a competition in 1975: 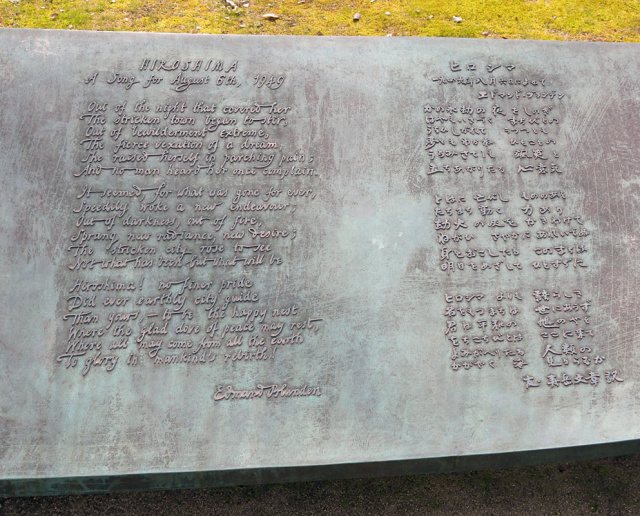 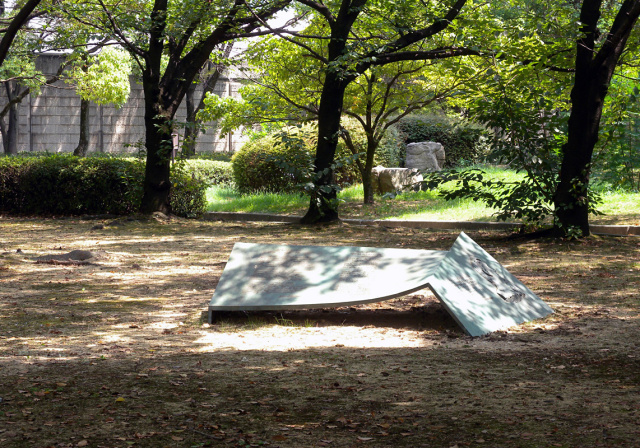