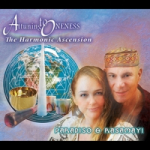 With today being the much-lauded 12/21/12, the end of the Mayan Calendar, and gatherings around the world marking the turning of an age, it seems like a most perfect and synchronistic time to be writing about the new music of Paradiso and Rasamayi. Entitled Attuning To Oneness – The Harmonic Ascension, it epitomizes the very essence of this global observance. The focus of their music is not as much on entertainment as it is on the healing qualities of sound and vibration. In their words: “Each song was recorded with the intention to facilitate individual and global evolution through the healing power of sound… manifesting a more peaceful and loving planetary culture, and raising consciousness to further improve the condition of Earth and all of her inhabitants.” A wealth of information and resources on this topic can be found at their website.

While there is no doubt that there is a need for this, there also seems to be a demand for it, as evidenced by the success of their previous CD, Third Eye Rising, which I reviewed in my column in Awareness Magazine. That album achieved a top 5 international radio chart performance, as well as an award for the Best New Age Album Of The Year (Independent Music Awards), in addition to recognition as being among the best Meditation/Relaxation albums by Zone Music Reporter. The musical harmony on their recordings, flows from the wellspring of the personal relationship Paradiso and Rasamayi have as loving soulmates, as well as partners in music.  It is a rare blessing that they feel compelled and honored to share with the world. 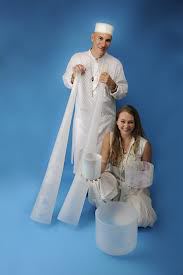 A number of exotic and esoteric instruments are featured on the album. Paradiso’s main instrument is the didjeridoo. For those who may not be familiar, it is an Australian Aboriginal instrument that is the oldest wind instrument on the planet, dating back some 40,000 years. He also plays instruments of more modern origin, such as keyboards, gong, shamanic percussion, and theremin. The theremin is an early electronic musical instrument created in the late 1920’s and may be recognized in some classic sci-fi films by its ethereal sound. Rasamayi’s contributions include vocals/seed mantra, Alchemy crystal singing bowls, and crystal merkaba. Rasamayi cites the particularly high vibration of these crystal bowls as having a lot to do with the spontaneous angelic vocalizing she does. In fact, the duo’s music is, for the most part, created in the moment, as they feel guided by Spirit. She adds: “we do very little planning in our songs, in our albums. We just let whatever wants to come through, come through.” In addition to Paradiso having performed at Carnegie Hall, as a duo, their music has been featured in events and projects with spiritual and musical luminaries such as Grammy-nominated sound healing pioneer  Steven Halpern, Deepak Chopra, Michael Beckwith, Gregg Braden, Dr Masaru Emoto, and Neale Donald Walsch.

As mentioned, this is not music created, as most is, for entertainment. Perhaps the word “entrainment” would be more indicative of its purpose. Also, not to overuse the words “ ethereal” and “esoteric,” but they go a long way in describing these evocative soundscapes. They are not based on conventional musical structures like melody, verse, chorus, etc. It is, in essence, more of a sonic tapestry with a strong shamanic element. It is deep and soulful, connecting with the listener in a place beyond where we usually listen to music from. What I wrote about their previous release, Third Eye Rising, is equally true for this one as well – that it is “simultaneously primal and otherworldly, and resonates with the listener on levels they may not even be aware of consciously.” Holistic practitioners and those doing deep inner work will appreciate these powerful currents of sound. Attuning To Oneness is a profoundly meditative experience that is best listened to in a quiet place with eyes closed. To quote The Beatles, “Turn off you mind, relax, and float downstream…”

Note:  This is a special pre-release article on Attuning To Oneness. The official release date of the album is March 5th, 2013. However, it is currently available for listening and purchase at CD Baby.

An insightful program with the charismatic San Francisco radio host Scout Bartlett interviewing Paradiso and Rasamayi about the album can be heard at this link.