As the old saying goes: “You can’t judge a book by its cover,” and I suppose that extends to CD’s as well. However, its hard not to be extremely impressed with the first impression flutist Ron Korb’s Asia Beauty CD makes with its stunning packaging and 36 page booklet with gorgeous full color photos and liner notes. Before even hearing the music, you are drawn into Ron’s world travels to exotic places and spaces. Fortunately, the music is equally impressive as well.

Although Ron lives in Canada, he has a deep and long-standing attraction for Asia; it’s scenery, culture, music, and more. As he shared in our interview: “It was quite easy to draw inspiration for Asia Beauty because China is so evocative. The landscape, the terraced fields in the mountains, the palaces, temples, arts, poetry and history all are fuel for the ideas in this album. I have travelled and performed in Asia more than 25 times and each time it is a unique and fulfilling experience. I used to live in Tokyo and I can honestly say I never experienced a dull moment there.” And I daresay there is not a dull moment on this album either. Others seem to agree with me as evidenced by Asia Beautygarnering accolades that include The Global Music Awards, 2015: Gold Medal – Best of Show and three other categories, Finalist in the International Acoustic Music Awards, and The Akademia Music Awards, 2015 where he won in two categories.

Unlike a lot of accomplished musicians, Ron did not come from a musical family, and in his words: “We didn’t even own a 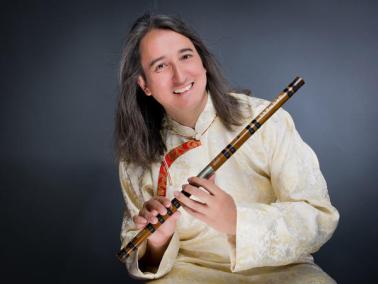 record player.” But he must have some artistic genes in his DNA somewhere, because he felt a strong affinity for music early in life and it has remained his driving passion through the years. Ron always loved the sound of the flute although didn’t get an opportunity to play an instrument (the recorder) until the last year of grade school. One of his early experiences was playing with an Irish flute and drum band, which piqued his interest in Celtic music. Ron was also interested in jazz, and eventually in classical music. He went on to study at The Royal Conservatory of Music and won a scholarship to study at The University of Toronto, Faculty of Music, where he graduated from with honors.

After college, Ron began recording albums and has amassed an extensive catalog representing a variety of world music influences. As well as being a prolific recording artist, Ron has performed in such prestigious venues as Madison Square Garden in New York, The Smithsonian Institution in Washington, DC. The Glastonbury Festival in England, Shanghai Concert Hall, Hong Kong City Hall Concert Theatre, the World Games 2009 Opening in Taiwan, Le Monument-National, Montreal, and many more. In addition to Ron’s extensive catalog of albums, his travels have also afforded him the opportunity to amass an impressive collection of over 250 indigenous flutes and woodwind instruments from around the world.

On Asia Beauty, a number of these flutes are accompanied by a wide variety of Eastern and Western instruments, played by a fine cast of musicians, some of whom have performed or recorded with the likes of Sting, Suzanne Vega, Peter Gabriel, Loreena McKennit, and more. With 22 tracks on the album I won’t list them all or go into detail all the songs, but will point out some highlights. And these luminous moments begin as soon as the album starts with a track called “Hanoi Café.” After reading the liner notes and viewing the pictures in the album, I was taken a bit by surprise when this piece was not the typically Asian-sounding melody or rhythm I was expecting but was actually written more as a waltz in ¾ time. The Asian influence came in the form of an accompanying instrument called an erhu, played by Lin Xiaoqiu, who is heard throughout the album. The erhu is a stringed instrument with a haunting sound, and is said to most closely emulate the human voice. In the liner notes, Ron mentions that while in Hanoi, he was taken by how much of the French colonial influence was still present there. This was perhaps reflected in the waltz-like character of this song. Other instruments include violin, accordion, piano, acoustic bass, drums, and of course, Ron’s beautiful flute and bass flute. 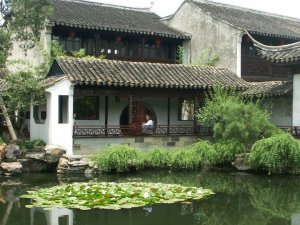 With the next song, “The Journey Begins,” Ron writes in the liner notes: “Many of the songs on this album derive their themes from an original story titled Jade Dragon Flute and the House of The Five Beauties, which I wrote in a hotel room in Shanghai. I had some tough times the previous year that changed my perspective and the story just seemed to flow out of me. The mythological fantasy story is set in ancient China but it is really based on events in my own life.” The next 7 songs are like musical chapters in this unfolding story. There isn’t room here to go into detail but it is definitely worth reading along in the liner notes while listening. I want to emphasize that whether it is in his writing or song, storytelling is a strong element in Ron’s creative expression. His music is visually and emotionally evocative, painting exotic soundscapes that draw the listener into their world.

Track 9 entitled “Two Mountains,” features Ron playing the bawu, a folk instrument from Yunan province in Southwest China made from a bamboo pipe and a single thin metal side-blown reed that creates the sound. Also featured is an instrument called a pipa, a 4-string lute, played here by Wendy Zhao. An unexpected instrumental addition on the next song, “Magic Sleep,” is the kalimba, which is actually an African thumb piano. The piece starts out with a wonderfully dreamy ambiance, evolving into a hypnotic groove with indigenous flutes, bass, percussion, and the guzheng, a harp-like 21-string instrument.

An intriguing change of mood is found in a piece called “The Beautiful Sadness,” which Ron describes in this way: “ Many 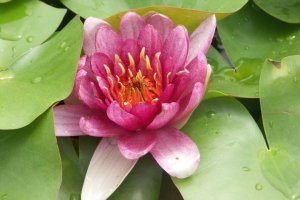 kinds of traditional Asian art forms express bittersweet feelings. This expression of sublime romantic tragedy is also found in much of contemporary Asian pop music. It is my belief that since ancient times, this beautiful sadness has fueled the creativity of countless poets, painters and musicians throughout.” Another change is heard on “The Reed Cave,” which unlike most of the richly orchestrated songs on the album is actually a solo flute piece, which Ron played in a limestone cave in China that has natural reverberation as the sound travels down the colorful walls of the cave system.

Showcasing yet another facet of Ron’s creative spectrum, a track called “Blue Bamboo” mixes piano, bass, and pipa with Chinese traditional flute (the dizi) played in an American blues style. I also greatly enjoyed the pleasant pastoral sounds of “Country Life,” that combines 3 different flutes, traditional Asian instruments, two guitars, piano, bass, and percussion. Also along these lines, although certainly not as pastoral is “The Sword of Heaven,” where the drums are much more out front, driving this jazz and rock-influenced fusion. And bringing the vibe down a few notches to put the album to bed is the final track, “Jasmine Lullaby,” which provides the perfect nightcap for this hour and fourteen-minute epic cross-cultural musical journey. 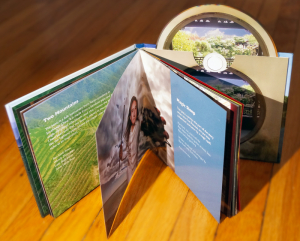 I wrote at the beginning about my first impressions of this album. Now, after experiencing the music, art, and words of Asia Beauty, that favorable impression is only magnified. Ron has gathered a large cast of world-class musicians to help bring life to his creative vision – a vision inspired by his experiences, feelings, and soul impressions of the far away lands he has been inexorably drawn to. This unique musical blending of East and West is exquisitely composed, arranged, and performed. I highly recommend getting the album in CD form as the artwork, photos, and packaging add another dimension to this masterful multi-media presentation. I’ll leave the final words to Ron who, when asked about his creative expression, replied: “Art is a gift and my vision is being able to speak of the beauty this earth, world culture, and the wonders our of life and love through music.”