Canadian finger-style guitarist Bob Ardern has a hard act to follow with his new album entitled Craftsman. That act is his previous release Wires Rosewood and Roots, which debuted at number 3 on the Zone Music Reporter Album Chart in March 2012, and was in the number 1 spot within two months. Overall it spent 6 months on the Top 100 chart and was ranked at No. 6 overall on the ZMR Top 100 Airplay Recordings Chart for 2012 and was nominated for Best Instrumental Album – Acoustic at the 9th Annual ZMR Awards held in New Orleans in May 2013. Having written about that excellent album, I can say these honors were well deserved. My feature article on Wires Rosewood and Roots can be read here on Music and Media Focus.

Speaking of reviews, here is an amusing little anecdote from Bob about the release of this new album that I found on his website: “While Dave Findlay and I were working on Craftsman, we were confident we had a good album. The music was good, the performances from all the musicians were good, the artwork was good, but there’s always a feeling of trepidation when you show off your baby to the world for the first time. We needn’t have worried. We’ve just had the first review and the news is good. Bill Binkleman likes it too. Cue the huge sigh of relief.” Bill Binkleman is one of the most highly regarded reviewers of music in this genre, so I can imagine the relief Bob and company must have felt in reading his well-written words of approval. Just for the record, I’m equally enthusiastic about this album as well. 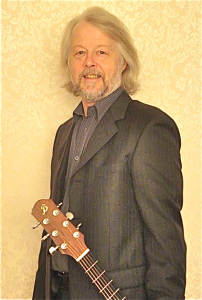 One thing I found of particular interest that I didn’t know about Bob Ardern before is that he has a degree in computer science. What’s interesting about this is the contrast between computer science and his music, which is anything but high tech, and is strongly influenced by the earthy traditional English folk music of a bygone era. Elements of Celtic, classical, and jazz also find their way into his decidedly acoustic sound. Craftsman features 12 instrumental tracks, three of which are solo guitar, while other instruments such as cello, percussion, glockenspiel, and more accompany 9 of the songs. According to the liner notes: “The title of the album refers to Bob’s current career as the crafter of music and to his past life as a cabinetmaker.  It also refers to an architectural style born in the Arts and Crafts movement of the early 20th Century.”

The album leaps into life with an up-tempo tune called “Tiddlywinks.” The intricate finger picking style found on Bob’s previous release is found here as well, locked into a solid percussion-driven beat that gets the proceedings off to a rousing start. Helping Bob on this track are Kev Corbett on percussion and the aforementioned Dave Findlay on bass and hi-hat. A lot of credit is given to Dave in the liner notes by Bob, who said: “The music has come to fruition under the delicate hand of producer David Findlay who knows when to leave the guitar alone and when to add other instruments.” The tempo slows down a bit on the Celtic-flavored “Pipe Dream,” which is accentuated by Kev’s playing on an Irish frame drum called a bodhran, as well as Dave’s pipe organ. The first of the solo guitar pieces is “Capo Breton Lullaby,” named for an island off the coast of Nova Scotia, as well as for a new kind of capo he used on his guitar. Bob’s

impeccable guitar technique is evident in this track, and I particularly liked his use of harmonics and legato phrasing, such as trills, hammer-on’s and pull-offs. One instrument you don’t hear very often, especially in a guitar-oriented tune is the glockenspiel, although Jimi Hendrix’ classic ballad, “Little Wing” comes to mind as an example. On Bob’s song entitled “Schrödinger’s Cat,” however, the two instruments interact in a more folk-oriented context with perhaps a slight trace of Celtic influence.

One of the album’s most intriguing tracks is “Nova Scotia New Age Blues,” that features some of Bob’s ornate fingerpicking that winds through a series of unexpected chord changes, with accompaniment by Alyssa Wright on cello. In a world of highly formulaic music, I find Bob’s melodic unpredictability refreshing. One of my favorite songs is a dreamy drifting piece called “Winding Down.” Although the term “new age” was used in the title of the previously mentioned track, this one is really the heir apparent to that classification on this album. With Dave Findlay’s accompaniment on gentle synthesizer and bells, the song floats effortlessly like a leaf in a stream, taking the listener along with it. Reflecting a different international influence is the Spanish-tinged “Paso Doble.” Bob presents it here in two different versions, one as a solo guitar, and one with other

instruments, including Kev Corbett on percussion and Dave Findlay on synthesizer, bass, and trumpet. While Bob acknowledges Dave’s contributions, I also think he deserves a shout out for his multi-instrumental talents, as well as his work as a producer. I really liked this track not only for the song itself, but also in the way it adds to the musical range that Bob exhibits on Craftsman.

I began this feature article by saying that Bob’s last album was a hard act to follow, but I would affirm that he has certainly outdone himself with this new release. Bob Ardern is one talented guitarist, whose music draws from a variety of sources, yet is interpreted through the filters of his own unique style and musical sensibility. In his words: “I like to write music that does more than simply rehash what everyone else has written. My music makes you think and touches nerves. I want to be more than just another writer of love songs so I look for inspiration from newspaper headlines and history books, from the views outside my window as well as the reflections in the glass.” Craftsman is a finely constructed listening experience that should appeal to a wide range of acoustic music lovers.