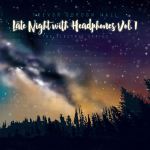 Guitarist Trevor Gordon Hall is not an artist who will be accused of being in a creative rut or mining the same musical territory over and over. On the contrary, he is constantly exploring new directions to bring fresh and innovative energy to his artistry. His previous release, Mind Heart Fingers,which I had the pleasure of writing about, featured a unique instrument he helped to design called a kalimbatar, which combines an acoustic guitar with a kalimba, or African thumb piano. However, on his new album, Late Night With Headphones Vol 1, Trevor has charted a decidedly different course for his music.

As Trevor shared in our interview: “I am known mostly for my acoustic guitar/kalimbatar work 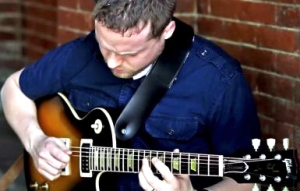 and this project was just trying to follow the muse into new directions. I wanted to start a series in my catalog that captured some of my other influences and ideas and came up with the title Late Night with Headphones. This music would focus on more electric guitar and electronic instrumentation and it just feels like late night solitary experience music to me. I love new sounds and trying to mess with things until I get that pain/joy deep in my chest that compels me to keep going in that direction. I live for that feeling.” He goes on to say: “My work is always very autobiographical and I feel like my music has been a sort of journaling of my experience of life. I know there are some aspects of my catalog that might be more accessible to newcomers than others but all my work hopefully expresses this sort of moving forward and
growth dimension.” 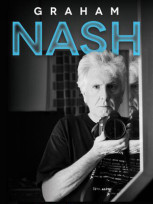 In addition to garnering critical acclaim and chart success for his music, Trevor has been recognized by a number of major music industry luminaries such as Graham Nash, of Crosby Stills, and Nash who said: “In the genre of intriguing guitar players, Trevor really stands out. His music is both soothing and challenging.” And GRAMMY winning producer and Windham Hill Records founder Will Ackerman, himself a virtuoso guitarist, shared: “Trevor is one of the few post-Michael Hedges guitarists who has managed to incorporate that vast repository of innovation while having an artistic voice strong enough to steadfastly avoid imitation.” In return, Trevor commented: “I grew up with Windham Hill. Music like that makes me feel something interesting. I think I will always have a lot of those colors in my music. I want to hear something that moves me. I try to follow the principle to compose notes that I would want to listen to and the ending result hopefully shows that love of music and sound.”

To this I would say, “mission accomplished.” The “colors” that Trevor mentions in his music are as beautiful as they are diverse. While his previous album was more acoustic and featured the kalimbatar, this new release features the electric guitar and electronic instrumentation, as alluded to in the album’s subtitle: “The Electric Series.” As I began listening to it, it occurred to me that perhaps I should stay true to the title and experience the album with headphones. I’m glad I did. As soon as I put them on I got a much fuller sense of the atmospheric ambiance and subtle nuances Trevor has created.

The opening track, “Uthaf,” has a dreamy drifting feel that carries you right into Trevor’s sonic  space. The title is an Icelandic word meaning “ocean,” and is inspired by Trevor’s touring to that country. In his words: “I was traveling alone, in an exotic place like Iceland and I felt the joy and fear of that kind of solitude. In a place way far from home, no one around, staring off into the sea facing Greenland. It gave me a bizarre sense of experiencing something very familiar even though it was my first time there alone and at that part of the island.” The song definitely captures that far away feeling.

The second track segues directly from the first, yet has a bit of a different feel with a subtle drum track, bass line, and increased structure to the composition, there is more of a “song” quality to it compared to the impressionistic tone poem of the opening track. Entitled “Roots And Branches,” the piece integrates many of the influences and inspirations in Trevor’s musical history. I absolutely loved the ambient jazz vibe of this song, and found his use of slide guitar in this context quite intriguing. But speaking of integrating diverse influences, the next track, “Cerebral 3.0” has a bit of everything, and Trevor characterizes it as: “a sort of Pat Metheney meets Frank Zappa at a Brazilian BBQ!” There is definitely an experimental feel to the piece, but it is quite enjoyable in it’s eccentricity. 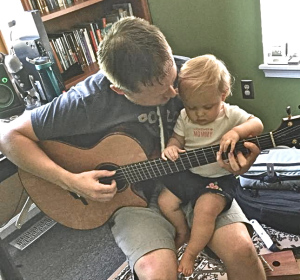 A track entitled, “She’s Almost Here,” has a warm sentimental quality with it being written in the days before the birth of Trevor’s first baby, Genevieve Grace Hall who born on August 4th 2015. In his words: “I had some time on my hands and had all these thoughts, feelings, fears, and anticipations about becoming a Dad for the first time.” Switching gears to an upbeat driving tempo is the interestingly titled “The Comfort Of Doubt.” According to Trevor, it reflects the philosophical and theological questioning that has been part of his life from an early age. As he explains: “There is something exciting about being in between the answers and the questions. It keeps me open and engaged, ignited and inspired. Doubt is the catalyst for that so all these years of it being the sworn enemy it has now become a rather comforting experience for me. The comfort of doubt is what leads to an honest and enriching life for me.” Musically, there is a sort of yin/yang balance between the up-tempo rhythm, the mellow guitar tone, and the spacious background ambiance. This is a great tune for cruising down the highway on a summer day with the top down and the wind in your hair. Also in this vein is the next song, “Embracing The Lack.”

The album comes full circle with a track called “Himinn,” which has a similar feel to the first song and is more of an ambient tone poem. The title means “clouds” or “heavens,” and the music perfectly fits this theme. These first and last tracks were written at the same time and Trevor explains them in this way: “These pieces are loosely structured to give that huge feeling of looking into the Icelandic distance and experiencing a flow of thoughts in a calming isolation.” The expansive ethereal nature is quite lovely and makes for a nice cooling down and conclusion to the album. 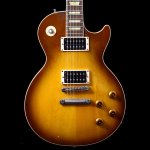 Having written about and greatly enjoyed Trevor’s previous acoustic album, I was more than pleasantly surprised to experience this other facet of his creative spectrum. As an electric guitarist myself, I must comment on his exquisite technique, tone, and use of effects. Trevor’s facility and fluidity on the fretboard is impressive to say the least, and I particularly appreciated his unusual and creative chord changes. His guitar tone is warm and smooth with a good deal of jazz influences in places, and Pat Metheney definitely came to mind a few times in listening to Trevor’s playing. In contrast, however, was the more airy side of his artistic expression that employed ample amounts of sonic effects like reverb and echo, and had more in common with ambient guitarists like Jeff Pearce.

As far as I’m concerned, this album which clocks in at just under a half hour could have gone on twice as long; I enjoyed it that much and was sorry to hear it end. Trevor Gordon Hall is a breath of fresh air on the new age music scene. His creativity seems to know no bounds and it is rare to find a musician barely into his 30’s with such an extensive musical vocabulary and range of influences who can integrate them into a uniquely original sound. I absolutely love this album and can’t wait to hear more from this innovative artist.