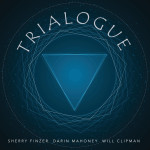 The appropriately named Trialogue is a musical conversation between three superb musicians who collectively have numerous international awards, GRAMMY nominations, and more among their impressive list of accolades. The alchemy of Sherry Finzer’s flutes, Darin Mahoney’s guitar, and the percussion of Will Clipman is magical, covering diverse musical terrain that ranges from light and breezy to exotic and atmospheric. Trialogue is truly a harmonic convergence of world-class talent that will appeal to a wide audience of music lovers. Before delving into the music of this triumvirate, lets take a very brief look at each musician individually.

Sherry Finzer is an artist whose music I’m quite familiar with, having written an artist profile and feature articles about a number of her albums, including: Sanctuary, Sanctuary II, Christmas Picante, and Transformation, which is a duet album with guitarist Darin Mahoney. Sherry is an award winning classical flutist who became drawn to new age music for the uplifting effect it can have on listeners. Sherry has performed with, in addition to Darin, Native American flutist Mark Holland, Australian pianist Fiona Joy, Windham Hill pianist Scott Cossu, and other local, national, and international musicians.

Darin Mahoney is a highly accomplished guitarist who grew up playing folk, country, and rock music before moving into more mellow Windham Hill-inspired instrumental sounds. Incidentally, on his first album, In The Grain,” Darin worked with Grammy winning producer and Windham Hill Records founder, Will Ackerman. In addition to being an excellent musician, he is also a trained luthier, who builds fine quality acoustic guitars, such as the one he used on this album. As a performer, Darin has shared the stage with well-known artists such as Kenny Chesney, Sammy Hagar, Keith Urban, & Gary Allan.

I first became acquainted with percussionist Will Clipman back in the 90’s, through his various recordings with iconic Native American flute player R. Carlos Nakai. Their collaboration has included recording and touring for more than a quarter century. In the course of his prolific career, Will has recorded over sixty albums, including  at least thirty for Canyon Records, where he is regarded as the house percussionist. Will has received seven GRAMMY® nominations, as well as numerous other awards and honors. His musical palette includes approximately one hundred percussion instruments from around the world, in addition to the traditional drum set.

The album kicks off on a jazzy note with a bouncy toe-tapping tune called “Cote d’Ivoire.” With Darin’s rhythm guitar and Will’s djembe drum locked into a funky two-chord vamp, Sherry’s flute takes wings. Throughout the album, Sherry plays a variety of flutes, often switching between them within a song. Here she starts on bass flute, moves to alto, and then to C flute. While some of the songs were written by one or two members of the trio this was one of the songs that was created by the three musicians together based on an improvisation. There is indeed a jam-like quality to it, as well as a sense of immediacy to the recording that listening to it with headphones makes you feel like you right there in the room with them. The next piece, “Mending Fences,” is one of Darin’s exquisite contributions, and the intro is reminiscent of the classic Windham Hill sound in his spacious open fingerstyle guitar playing. This track has a very different feel than the first one in that it is a much more detailed composition which evolves through a number of different movements, including a bass solo in one of the rhythmic sections. 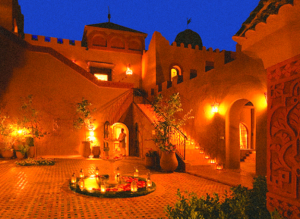 Perhaps the most unique and certainly the most exotic song on the album is “Midnight In Marrakech.” In my interview with Will, he shared this story about the inspiration for this piece: “The song ‘Midnight in Marrakech’ was inspired by my visit to the grand souk, or central marketplace, in Marrakech when I was on tour in Morocco a few years ago with R. Carlos Nakai and a large ensemble of Moroccan artist, poets, actors and musicians called Damana. The song evolved from a groove I laid down on tar (the traditional Moroccan frame drum) for Sherry and Darin when we first started jamming together in Sherry’s living room. Sherry immediately threw down a gorgeous, spooky, minor-key flute part, and Darin starting doing some really cool stuff de-tuning the guitar and plucking harmonics while playing funky, chunky rhythm chords.” This song is a real window into the creative interaction of the group, and to borrow a phrase from the 60’s is definitely “far-out.”

While some of the songs evolved out the trio’s group synergy, others are new versions of songs from previous

albums. Such is the case with “Confused” and “Alger Street,” which according to Sherry were the two most popular songs from Transformation, her collaborative album with Darin. In addition to sharing a common origin, they have a similar ambiance with Sherry’s wistful flute and Darin’s evocative guitar work, propelled by Will’s mid-tempo groove on the udu, a small African clay drum with a distinctive earthy sound (see photo below.) Another composition by Sherry and Darin is “Dark Horse,” which conjures images of the wide-open spaces, red rock canyons, and expansive skies of the American Southwest, where they live.

I greatly enjoyed the light-hearted, carefree energy of a track called “Top Down.” I suspect that the title is a reference to driving in a convertible, and the song certainly evokes the feel of cruising down the road with the wind in your hair on a summer day. The sense of forward motion is enhanced by a jaunty bass line underscoring Darin’s rhythm and lead guitar and the fact that Will is playing a full drum kit here. All of this makes a perfect foundation for Sherry’s high-flying flute to complete the mix. While much of Sherry’s flute playing could be described in that way, on a group-composed tune called “Thanks For Asking,” her mellow vibrato-inflected sound takes on a more haunting feel that is quite emotive.

The album draws to a peaceful conclusion with the only song that was not written by one or more of the trio. In our interview, Sherry talked about this piece: “’Wolf Haven’ is a song composed by Scott Cossu, who I developed a musical relationship with after meeting him at a jazz and wine festival that we both performed in north of Phoenix back around 2010. We kept in contact over the years and he recently released his latest album Safe in Your Arms on my label Heart Dance Records.” (Click on Scott’s link to read a feature article on this album.) This piece has an open atmospheric ambiance, created in part by Darin’s use of digital delay on his rhythm guitar to create an echo effect on his chords. It’s a lovely conclusion to the album and was a bit like a pleasant after dinner cordial to settle down with after a full course meal, which Trialogue certainly provides on a musical level. 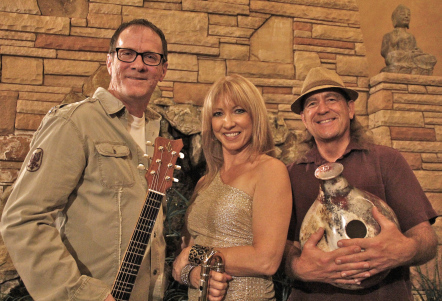 I genuinely enjoyed every song on this album, and was constantly impressed with the level of musicianship of each member as well as the energy of their collaboration. One of the things I appreciated about Darin’s acoustic guitar playing is his stylistic range – from his spacious suspended intros with notes that hang in the air, to folky fingerpicking, jazzy rhythms, tasteful lead guitar, and more. He and Sherry have been performing and recording together for a while and the musical rapport they have developed really shows over the course of this album. Sherry’s flute parts are always a perfect match for the context of each song both musically and emotionally. The fact that she uses three different flutes adds a variety of shadings and colors to the album as well. And blending the percussive mastery of Will Clipman into their sound was a brilliant choice, elevating the project to another level. Being the accomplished music veteran he is, Will always knows exactly what sound will best compliment a particular track and integrates it into the mix with grace and spirit. Although I have mentioned some of the primary instruments Will used, such as udu, tar, and drum kit, throughout the album he also supplements them with a number of additional sounds like cymbals, gong, chimes, agogo, caxixis, claves, spring drums, and more.

While each musician is superb in their own right, the old saying that “the whole is greater than the sum of the parts.,” is meaningful here in the way their creative synergy draws out the best of each of them. There is much magic, and a bit of Southwestern mojo, in the alchemy of these Arizona artists. The inspired interplay on Trialogue moves and grooves, drifts and dreams, and takes the listener on a journey through an enchanting unfolding of musical landscapes.