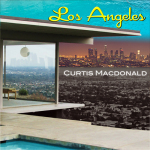 Having had the opportunity to write about Curtis Macdonald’s previous album, When Dreams Come True, which I loved, I was very much looking forward to his latest, and 18th release, Los Angeles. The premise for this new album is quite unique and most definitely intriguing. Curtis’ many years of composing music for film and his love for the classic “film noir” genre led him to blend the distinctive feel of a vintage Humphrey Bogart detective movie or Raymond Chandler dime store novel with sounds of jazz and contemporary electronic music to paint an impressionistic sonic portrait of his current home city of Los Angeles. However, this is not his first foray into musical interpretations of urban landscapes. In 2011, Curtis Macdonald’s Manhattanalbum portrayed the streets and smoky bars of late 50’s and early 60’s New York City in cool jazz tones. Although, given the night and day difference between New York and LA, listeners are in for a very different kind of instrumental travelogue.

As Curtis explains: “I imagine a modern day environment with a faint cast of color interweaving with the black and white 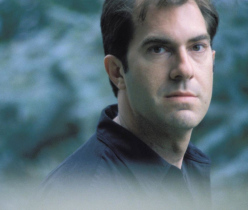 hues of a 1940’s film noir through the city streets of Los Angeles. I wanted to surround these environments with the sound that is heard at this moment in time interwoven with my jazz roots. Walking the streets at various times in the day and night inspired the compositions. I reflect on the architecture and the people, from Pershing Square to the Hollywood Hills and west on Sunset Boulevard to the Pacific Ocean. I have a deep appreciation for the look and feel of the topography and I wanted to create a soundtrack that would reflect a feeling of mid­century Los Angeles mixed with today. I love jazz and minimalism so I wanted to do a genre mash-up of the “noir” sound” of smoky sax and the cool jazz sound of Miles Davis layered with trance and EDM (electronic dance music) production values.” Curtis calls this retro-contemporary fusion “Modern Noir.”

The compositional style of Los Angeles differs in some ways from his previous releases and their pop song form with lyrical melodies. Here Curtis used fragment composition, utilizing small motifs with Trance and EDM forms – chopping up bits of acoustic samples and weaving them with many electric piano and synth elements. In his words, “Each piece is more of a background instrumental with it’s own dramatic attitude, composed as if I was painting with sound.” 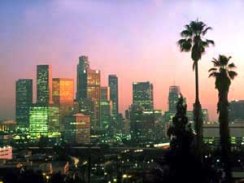 The sun rises on Los Angeles with the opening track called “Dawn on Broadway.” Right from the start, I was captivated by a collage of trippy electronic blips, bleeps, wooshes, and ghostly trumpet accents. As the song evolves a down-tempo groove kicks in with Curtis’ dreamy electric piano completing the picture. While the song has motion, the vibe is definitely well chilled, providing a most pleasant way to begin the day in the city of angels. A similar atmosphere carries over into the next track as we enjoy a leisurely stroll across the “Sixth Street Bridge.” However the tempo kicks into a higher gear heading “West On Wilshire.” As I listened to this smooth groove, an image formed in my mind of cruising down the boulevard in a cool vintage convertible, wind in the hair, soaking in the California sunshine. Sweet!

As the album progresses, a track called “Walking Hollywood” seemed to have more of an evening energy – getting ready 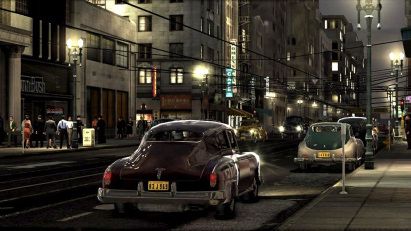 to hit some of the hip jazz clubs and night spots. While the aforementioned retro modern sound is evident throughout the album, perhaps the track that epitomizes it most is “Angel’s Flight.” The sensual sax riffs are right out of a film noir movie, yet juxtaposed elegantly over more contemporary instrumental soundscape. Curtis’ piano work is exceptional on this piece. A song called “The Redline,” which is named for an LA subway line, perfectly captures the ambience and movement of being on a train, and even making stops as it alternates between more subtle motion and higher velocity dance floor beats. The album concludes with the title track, which seems to capture the drama and flair of the densely populated mega-city that is Los Angeles.

As I mentioned at the start, I was very much looking forward to hearing this album, and I am certainly not disappointed. It was totally worth waiting for. Curtis Macdonald is one of the premier artists today in the fusion of new age, ambient, chill, electronica, and jazz. And the addition of film noir elements on Los Angeles takes it to another level. While the foundation of the music leans more towards the contemporary side, the subtle and distinct touches of 40’s jazz and film music make for a most unique and enjoyable listening experience. On one level, Curtis has created a musical equivalent to the popular trend on social media of “Throwback Thursday,” reaching back and bringing elements of the past into the present. 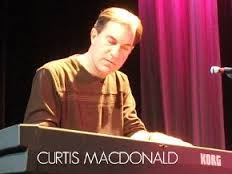 One of the things I enjoy most on this album and in Curtis’ music in general is the detail he incorporates into his soundscapes. As a synthesist myself, I especially appreciate the sci-fi sounding electronic accents and ear candy that he flavors his compositions with. He has a wonderful sense of just when and where to add them, without overdoing it. I find myself listening for those touches as a song evolves, and often wonder what sonic surprise will appear next. I also greatly enjoy his playing on the electric piano, which can range from classy and elegant to jazzy and soulful. The tone of the electric piano is softer and warmer than an acoustic piano and lends itself to the vibe of this music. The album creates an ambience that is laid-back, yet with enough bounce to keep your toe tapping. Los Angeles is an outstanding release and makes for a wonderful showcase of Curtis Macdonald’s skills as a gifted composer, arranger, and instrumentalist. This is an album I will listen to again and again, and  I can’t wait to hear what new musical magic he has up his sleeve in the future.