It’s been about two and a half years since I wrote a pre-release article about Attuning To Oneness, the previous recording by Paradiso and Rasamayi. Since that time, the album went on to win a Best New Age Album of the Year Award, as well as debuting in the top 5 in global airplay of World/Ambient/New Age music. This followed on the heels of an earlier release, 3rd Eye Rising, which also received extensive international airplay and numerous awards including Best New Age Album, 2011 in the Independent Music Awards. This is quite an extraordinary achievement for music as esoteric and metaphysically based as theirs is. So the bar has been set very high and expectations abound for this new album by noted sound healers Paradiso and Rasamayi. But I’m sure that fans of their transcendental soundscapes will not be disappointed.

In fact, a distinguishing feature of this album may have fans twice as enthusiastic. The fact is that Celestial Resonance is actually a double CD. The first disc, entitled “The Journey,” is one long track that runs over an hour in length. The second disc, “The Milestones,” contains 11 songs totaling just over an hour. If listening to 2 hours of their ethereal sonic tapestries doesn’t elevate your vibrations, I don’t know what will. 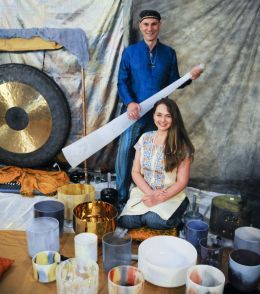 article on the songs of Paradiso and Rasamayi: “They are not based on conventional musical structures like melody, verse, chorus, etc. This is not music created, as most is, for entertainment. Perhaps the word entrainment would be more indicative of its purpose.” In fact, according to Rasamayi: “We do not consider “musician” to be our primary job description! We are primarily practitioners of and ambassadors for the sacred sound current. The function of the sacred sound current is to enlighten sentient beings, support and accelerate our evolution, and heal our physical and emotional bodies. We are in service to these principles and energetics, and the ultimate goal is the transformation of humanity.”

Their single minded devotion to the healing power of sound and music has opened the door for them to collaborate with some of top people in this field, like Steven Halpern, Neale Donald Walsh, Michael Bernard Beckwith, and Dr. Masaru Emoto, among others. While Paradiso does use some “conventional” instruments such as keyboards and bass guitar, many of his sounds emanate from more exotic sources including traditional and crystal didjeridoos, Dhavani drum, wind synthesizer, crystal tuning forks, gong, and more. Rasamayi, in addition to her heavenly vocals, uses quartz based “instruments” with names such as crystal singing bowls, expanding crystal pyramids, and crystal merkaba activator that make them sound like they must have originated in Atlantis, or perhaps in another dimension. According to Rasamayi: “The crystal instruments are reflections of water energy. Water is also a crystalline construct, and so the crystal instruments – including the Alchemy bowls, crystal didgeridoos, and expanding crystal pyramids – have a deep resonance with the waters of the body and the planet. 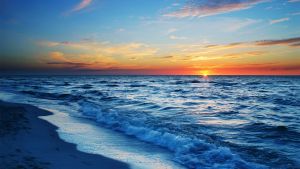 The theme (and sound) of water plays a foundational role in this recording. Rasamayi goes on to share: “This album began from an inspiration Paradiso received while we were performing on the coast of Florida. He reflected that most ocean recordings are made from the shoreline, but that the sound of the ocean from within the ocean was more subtle, relaxing, immersive and womb-like. He took a Zoom recording device, waded waist deep into the ocean, and held the recorder over the water for an hour. This recording is the base note of the entire album: it is not always heard in every song, but it is always present. This womb-like frequency is an essential component of the overall intention of the album: that divine love is always cradling and surrounding each of us.”

So what is the sound of all these earthly and otherworldly instruments and performances? Disc 1, appropriately entitled “The Journey,” is like a 65-minute voyage crossing the borders into eternity. The first thing we hear, is indeed water; the sound of the sea. Other instruments enter slowly as they begin to build a meditative drone that draws the listener inward. Like the ocean lapping on the beach, waves of sound wash against the shoreline of consciousness, beckoning to the depths within. And like the tides, instruments and voices roll in slowly and back out again. Although there is a drone basis to the music, it is never static as sonic elements ebb and flow over the course of this hour-long sound meditation. I found that listening with headphones made this already-immersive experience even deeper. By the end of “The Journey,” it is certain that the listener will be in a different state of mind and being than from where they were when they started.

Disc 2 is different in that instead of one long piece, it is composed of 11 shorter tracks. However, the instrumentation and 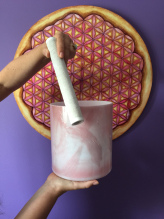 overall musical DNA is similar. As I listened to track 1, “Genesis,” I was aware of the different tones that emanate from the crystal bowls. On the one hand, there is the sound of running the striker around the edge of the bowl to produce a sustained “singing” sound and harmonics. And then there is the muted bell-like chime that comes from gently striking the bowl with a soft mallet. When a number of bowls are used which are tuned to different notes, the effect is mesmerizing.

Over the course of the 11 songs, there are both similarities and variations. All of the music is focused on creating a high vibration meditative experience, although the instrumental focus does shift from one piece to another. Tracks 1 and 2 are quite ethereal, while Track 3, “Love’s Repose,” features Paradiso’s powerful didjeridoo that provides a more earthy grounding effect as other instruments and vocals swirl around it. On Track 5, “The Journey Through,” I particularly enjoyed the percussive juxtaposition of gently tinkling chimes set against the slow deep heartbeat rhythm of a hand drum. Another thing I appreciated, not only on this song, but throughout the entire album was the way that Rasamayi’s ethereal vocalizations were appropriately accented with reverb to create a cosmic cathedral effect that adds to the overall ambience of the album. 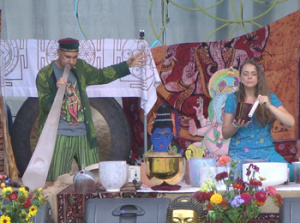 While I repeatedly draw upon words such as “ethereal” and “meditative” to describe the sound of this music, there are moments where a word like “intense” could also be used. In my interview with Paradiso, he spoke eloquently about this aspect: “With music that falls into the ‘healing’ category, we are continually noticing that many people operate under the misconception that healing should be light and pretty at all times. This is not our experience as sound healers or as individuals who have had profound healing journeys of the physical and emotional bodies. Healing is a process that is sometimes messy; as old wounds heal, the physical or emotional mending can be uncomfortable as the old is excised and the new is created – any profound change, however positive, virtually always creates tension. Because the frequency is of divine love, this CD represents the lightest and most beautiful of our music to date, but the element of profound and powerful shift is still very present in the mood and tone.”

Celestial Resonance, which is subtitled “Journey Into The Infinite Heart,” provides over two hours of deep sound healing vibrations. As I mentioned in the beginning, this is not music for entertainment. It is not something to listen to while cruising down the highway or doing external activities. It is a sonic experience created with focused intention to take the listener into inner realms of consciousness. After listening to the entire Disc 1 with headphones, it took me a few minutes to make sure my feet were touching the ground when I walked. Celestial Resonance is a potent sonic attunement that reaches deep into one’s awareness. Fans of Paradiso and Rasamayi’s music as well as those interested in the field of sound healing will discover a profound listening experience in the expansive reverberations of Celestial Resonance.